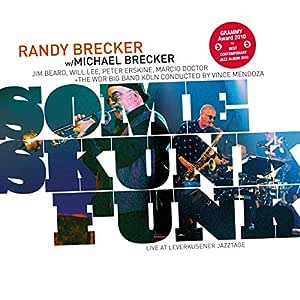 Randal "Randy" Brecker (born November 27, 1945) is an American trumpeter and flugelhornist. His versatility in musical tastes have made him a sought-after player, equally accomplished in playing jazz, rock, and R&B. He has also worked as a studio player for many famous musicians. He has performed or recorded with Stanley Turrentine, Billy Cobham, Bruce Springsteen, Lou Reed, Sandip Burman, Charles Mingus, Blood, Sweat & Tears, Horace Silver, Frank Zappa, Parliament-Funkadelic, Chris Parker, Jaco Pastorius, Dire Straits, Todd Rundgren, Blue Öyster Cult, Richard Barone, Spyro Gyra, Barbara Dennerlein and many others. In his formative years, Brecker studied trumpet with Bill Adam at Indiana University.
Michael Leonard Brecker (March 29, 1949 January 13, 2007) was an American jazz saxophonist and composer. Acknowledged as "a quiet, gentle musician widely regarded as the most influential tenor saxophonist since John Coltrane", he was awarded 15 Grammy Awards as both performer and composer. He was awarded an Honorary Doctorate from Berklee College of Music in 2004, and was inducted into the Down Beat Jazz Hall of Fame in 2007.