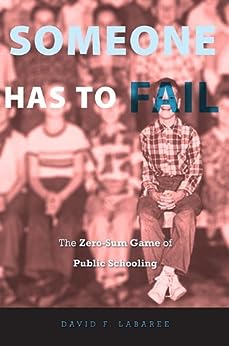 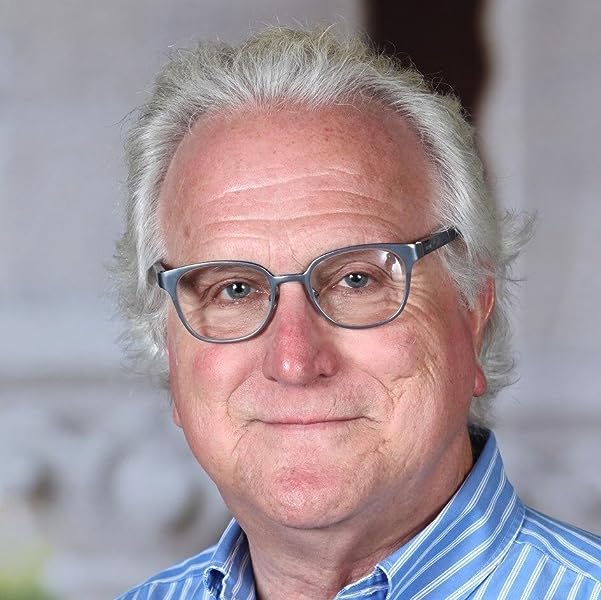 Someone Has to Fail: The Zero-Sum Game of Public Schooling Kindle Edition

by David F. Labaree (Author) Format: Kindle Edition
See all formats and editions
Sorry, there was a problem loading this page. Try again.

What do we really want from schools? Only everything, in all its contradictions. Most of all, we want access and opportunity for all children—but all possible advantages for our own. So argues historian David Labaree in this provocative look at the way “this archetype of dysfunction works so well at what we want it to do even as it evades what we explicitly ask it to do.”

Ever since the common school movement of the nineteenth century, mass schooling has been seen as an essential solution to great social problems. Yet as wave after wave of reform movements have shown, schools are extremely difficult to change. Labaree shows how the very organization of the locally controlled, administratively limited school system makes reform difficult.

At the same time, he argues, the choices of educational consumers have always overwhelmed top-down efforts at school reform. Individual families seek to use schools for their own purposes—to pursue social opportunity, if they need it, and to preserve social advantage, if they have it. In principle, we want the best for all children. In practice, we want the best for our own.

Provocative, unflinching, wry, Someone Has to Fail looks at the way that unintended consequences of consumer choices have created an extraordinarily resilient educational system, perpetually expanding, perpetually unequal, constantly being reformed, and never changing much.

"In this important book...the skeptical, contrarian, and cheerfully pessimistic Stanford education professor Labaree trenchantly exposes the true purposes behind...American public schools and explains why the institution can never fulfill the dreams of those who use it or those who attempt to improve it. "
--The Atlantic Monthly

David F. Labaree is Professor of Education at Stanford University. --This text refers to an out of print or unavailable edition of this title.

I am a retired professor in the Graduate School of Education at Stanford University who writes about the history and sociology of American education.

I have written about the evolution of high schools (“The Making of an American High School,” 1988), the growing role of consumerism in education (“How to Succeed in School Without Really Learning,” 1997), the origins and character of schools of education in American universities (“The Trouble With Ed Schools,” 2004), and the peculiar nature of the American system of schooling ("Someone Has to Fail," 2010). Along the way I also published a collection of essays (“Education, Markets, and the Public Good,” 2007).

My most recent book, “A Perfect Mess,” is an essay about the nature of the American system of higher education. From the perspective of 19th century visitors to the U.S., the American system of higher education was a joke. It wasn’t even a system. Underfunded, underwhelming in its dedication to learning, dispersed to the hinterlands, and lacking a compelling social function, the system seemed destined for deserved obscurity. But by the second half of the 20th century, the system had assumed a dominant position in the world market in higher education. It had the largest endowments, produced the most scholarship, earned the most Nobel prizes, attracted the most esteemed students and scholars, and thoroughly dominated the rankings of world universities. The question is how this happened. The answer is that the characteristics of the system that seemed disadvantages in the 19th century turned out to be advantages in the 20th century. Its modest state funding, dependence on student tuition and alumni donations, and independence from the church gave it a much greater degree of autonomy than institutions elsewhere in the world, which were largely dependent on the state. Operating as independent enterprises, American public and private colleges and universities learned to be highly entrepreneurial in seeking out sources of financial support and pursuing new opportunities. By making themselves accessible to educational consumers and useful in meeting social needs and in fulfilling individual ambitions, they developed a broad base of political support. This broad political and financial base, grounded in large and academically undemanding undergraduate programs, in turn provided support for cutting-edge research and advanced graduate study at the system’s pinnacle. As a result, American higher education managed to combine a unique mix of the populist, the practical, and the elite in a single complex system.

4.1 out of 5 stars
4.1 out of 5
34 global ratings
How are ratings calculated?
To calculate the overall star rating and percentage breakdown by star, we don’t use a simple average. Instead, our system considers things like how recent a review is and if the reviewer bought the item on Amazon. It also analyzes reviews to verify trustworthiness.
Top reviews

Maria
3.0 out of 5 stars Informative, but fell short.
Reviewed in the United States on April 3, 2016
Verified Purchase
Pros:
1) Overview of the history of the education system in the US
2) Some compelling arguments about why education reform is unlikely to work

Cons:
1) Incredibly repetitive. You often have to skim through pages at a time looking for new ideas.
2) Its approach is quite unscientific. There are no references to academic studies or data points as evidence, only academic rhetoric and, eventually, a single case study. As a result, it reads less like an academic gathered a plethora of information, synthesized it, and came to a conclusion, but rather, like he started with a thesis, then constructed an argument to support it.
3) As other reviews have pointed out, parts of his argument fall flat. For example, he defines social mobility as one's ability to change their relative position on a socioeconomic hierarchy, completely absent an ability to actually improve their quality of life and access to goods.

Conclusion: Know what this book is and isn't. It will provide you with some interesting and valuable perspective on the history and status of the US education system. It won't be easy-to-read, rigorously researched, or academically satisfying. While I certainly learned from it, I think I could've absorbed this information in a better-packaged form.
Read more
3 people found this helpful
Helpful
Report abuse

Gerald A. Heverly
4.0 out of 5 stars A zero sum game
Reviewed in the United States on January 9, 2011
Verified Purchase
This book is a bit like Jim Clark's launch of 3D computing. Before Labaree all ed writing was flat earth; two dimensional; pre-Columbian.
Read an education writer and you'll hear about why we should change A in order to move B along toward nirvana (higher test scores; greater literacy; victory over all those smart Chinese and Finns).
But in this book when you change A it moves B along, which moves C in the opposite direction so that we end up more or less where you began. Why is this, according to Dr. Labaree? Because Americans want their school system to provide two mutually contradictory results: social mobility (Horatio Alger) and social equality (no child left behind). And then to really assure failure we ask the schools to tackle a myriad of social problems that we don't want to tackle in more controversial ways (re-ordering the economy; empowering the masses). We want the schools to solve the problem of racism; reduce teen pregnancy; convince kids to stay off drugs; even produce safe drivers; and more.
All these conflicting goals guarantee failure. And the way we've coped with this dilemma is to allow the schools to get by without much emphasis on what kids learn. We settle for permitting the schools to certify that they put in their time. If we tried to do more than that we'd be at each other's throats all the time trying to reconcile individual liberty with group cohesion.
I wish there was some way to mass produce chapter five of this book and show it to teachers all over the US. It does a wonderful job of showing how all these national problems are played out in individual classrooms. Once you read it you'll have a better idea why I resist outside interference in the way I teach--even though I know I'm a long way from competent.
My one problem with this book is that Dr. Labaree needs a good editor. Like many academics he can't say something once; he feels compelled to repeat his points over and over again. Chopping 75 pages out of this would have made it a more accessible read.
If you like this sort of thing I'd recommend The Teaching Gap by Stigler and Hiebert which compares US schools to those in Japan and Germany.
Read more
28 people found this helpful
Helpful
Report abuse

Kindle Customer
4.0 out of 5 stars purchased for class
Reviewed in the United States on January 13, 2013
Verified Purchase
I was looking for a book for my grad students to read. This was the perfect choice as it triggered some interesting, thought provoking conversations on the nature of public schools in this country. I usually don't repeat such selections in my grad course, but I'm leaning towards actually using this book again in fall 2013.
Read more
7 people found this helpful
Helpful
Report abuse

Mesquite
4.0 out of 5 stars Excellent Read
Reviewed in the United States on May 8, 2018
Verified Purchase
A treasure trove of wealth for an educator.
Read more
Helpful
Report abuse

Mary
3.0 out of 5 stars Three Stars
Reviewed in the United States on January 28, 2016
Verified Purchase
Has some interesting parts, though it was mostly a dry read. Writing style tend to sound pretentious.
Read more
One person found this helpful
Helpful
Report abuse

Crystal
5.0 out of 5 stars Amazing book！
Reviewed in the United States on October 11, 2013
Verified Purchase
I like it very much! It's a required textbook for our course and I find it quite helpful! Amazing book!
Read more
Helpful
Report abuse
See all reviews