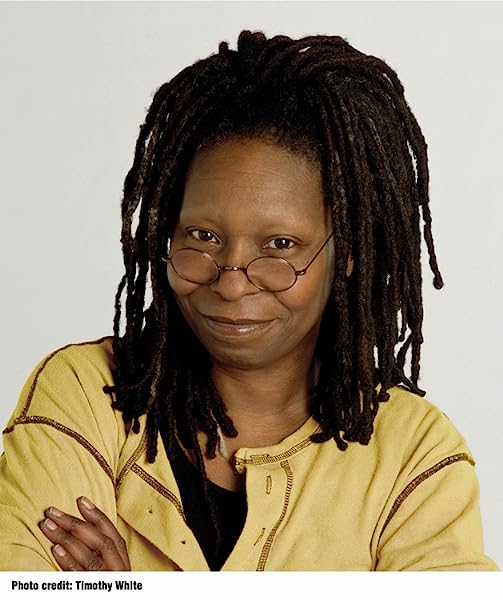 If Someone Says "You Complete Me," RUN!: Whoopi's Big Book of Relationships Hardcover – October 13, 2015

by Whoopi Goldberg (Author)
4.4 out of 5 stars 352 ratings
See all formats and editions
Sorry, there was a problem loading this page. Try again.

From the provocative and hilarious EGOT winner, bestselling author, and host of The View, Whoopi Goldberg, comes the perfect antidote to all those outdated relationship advice books in the world, weighing in on why marriage isn't for everybody, and how the life you want shouldn't be the life everyone else expects you to have.

Whoopi Goldberg has been an electrifying, envelope-pushing public figure of many stripes: acclaimed actor, comedienne, singer, songwriter, author, political activist and talk show host. Now, Whoopi will speak openly about why marriage isn't for everyone, how being alone can be satisfying, and how what's most important is understanding who you are and what makes you happy. Wise, funny, and conversation-starting, Whoopi's message is sure to resonate with the millions of people who struggle with relationships every day.

Goldberg says: "I get to hear from a lot of different people about relationships and this got me trying to figure out why the divorce rate is SO high. It occurred to me that as one who has done it badly often, I might have some insight. It's hard to really know the other person's agenda, but if someone says 'you complete me'...RUN!!!"
Read more
Previous page
Next page

The advice is so refreshing and seems to be based on Goldberg's desire to be completely honest with wide-eyed lovers who don't know a thing about marriage and are being fed the same bulls-t advice over and over again - only for nearly half of them to fail at the endeavor.―The Root

Whoopi Goldberg is one of a very elite group of artists who have won the Grammy, the Academy Award, the Golden Globe, the Emmy, and a Tony. Currently, she is the moderator of ABC Television Network's The View. Whoopi is equally well-known for her humanitarian efforts on behalf of children, the homeless, human rights, education, substance abuse and the battle against AIDS. Among her many charitable activities, Whoopi is a Goodwill Ambassador to the United Nations.

Whoopi Goldberg is the the author of the Sugar Plum Ballerinas books, as well as Whoopi's Big Book of Manners, illustrated by Olo. She has won a Tony, an Emmy, an Oscar, and a Grammy, as well as two Golden Globes. In 2001, she was awarded the prestigious Mark Twain Prize for American Humor. Whoopi Goldberg has appeared in scores of films and is a host of ABC's The View. She lives in New York and Vermont.

Nora
5.0 out of 5 stars Very important information in here, must read
Reviewed in the United States 🇺🇸 on February 23, 2020
Verified Purchase
Haven’t finished it, but so far gives so many ideas and valid points with “evidence” as to why she has a point. I went through a 2 year relationship with a narcissist at only ages of 19-21 so I was destroyed as you can imagine and finally with gods will, got the strength to leave, and this helped me see the picture a little better of why I made a mistake of going into it, what could have allowed me to accept his behavior in the first place and how I can further choose if another relationship is for me or not, and if it is, then how I must approach it and how I know it’s the right one this time. Thank you Whoopi for writing this book and giving me some clarification on love and idealized love and making me feel not alone in having had the urge to fix my ex as you put it in clarification that we women are influenced by media to be fixers and we idealize change in a man and we accept them in hopes to change them. Thank you. I don’t feel as crazy anymore. Get this book if you’re confused about love and modern love and how our history of media influenced our idea on what love is and how we are better off alone (or with cats) than with the wrong person or in a relationship if we can’t handle taking care of someone. Not everyone’s meant to be in a relationship but she gives you steps of clarification and help if you do want to be in one.
Read more
Helpful
Report abuse

K. Kaolin
5.0 out of 5 stars Refrain from Remaining in Absurdly Dissatisfying Intimate Relationships
Reviewed in the United States 🇺🇸 on February 28, 2018
Verified Purchase
Talking About Race: A Workbook About White People Fostering Racial Equality in Their Lives  I had the pleasure of reading this book in one read the other night. Having seen Whoopi on The View in which she is so needed, I was enthused about this reading. In this 215 page book there is an Introduction, fifteen chapters and a Final Word. Each chapter includes a subject that stands on its on which makes it especially refreshing. Her humor, while expected does not remain an arduous theme as she states the seriousness of each aspect of its progressions an her choices clearly. What stood out most to me was her compassion for women who feel compelled to remain in dissatisfying relationships as Goldberg covers a lot of ground. She also prefers her own 'solid identity' as Elan Gregory, the author of "Lucid", "Organic Intelligence" and "Escape from Liberty" so aptly frames the resurgence of a power within a power of finding oneself out through the experience of others; thru relationship and getting more comfortable along the way. The comfort-zone lies in being true to oneself, which takes time, introspection and weeding out choices that may be right for others but not necessarily for yourself. Whoopi is also frank about having made her own share of mistakes. "If Someone Says "You Complete Me, " Run! Is an ideal book for you no matter how old you are. It is thoughtful, engaging and endearing. You needn't be stuck in any relationship that becomes absurd to you over time. For women in today's world with the backlash of pressure to be something you are not to satisfy others, Goldberg's book is very important. She does not throw shade on anyone either but asks you to bask in the light of common sense, a positive self-image and self-care as you engage in any form of intimacy that comes along your path.
Read more
Helpful
Report abuse

MKN
5.0 out of 5 stars Love her
Reviewed in the United States 🇺🇸 on September 20, 2017
Verified Purchase
Though she is a woman, she isn't bias, being pro-women, or pro-men, but she is very open minded, aware, and analytical of various situations, putting forth the most reasonable and rational option for birthing better relationships.
Though she has had failed relationships, marriages, some may think she isn't qualified to speak on the aspects of love, but she has taken what she's learned from her experiences and engrained them all within the pages of this book. Consequently, she isn't only helping those who are going through the exact or similar situations, but also giving others the insight on how she found herself in those predicaments and how to avoid them.
-
She begins with how we view relationships, and that what we are fed to expect and believe, are not always primarily true. Expectations today are crazy, with the media portraying hopes and dreams that may only be fantasy and a far fetch from reality. The 3 minute songs and the hour long movies show these excessively romantic ideologies which we then perceive as possible and applicable to our lives.
Our lives however, are much more complicated than a 3 minute song.
-
She includes, questions from her fans and followers, granting wisdom in a funny, interesting way, encouraging readers to do what's best for them, also making them aware of the draw backs of certain decisions. From noting, all the wrong reasons for entering relationships or marriage, and how we are blinded when entering into relationships, the author covers a variety of issues that tons are facing. A lot of the points are common sense but she grants her twist on it, making it more understandable, and entertaining.
Read more
Helpful
Report abuse
See all reviews

Oyebode Adesida
5.0 out of 5 stars Thanks for this Whoopi
Reviewed in the United Kingdom 🇬🇧 on January 5, 2016
Verified Purchase
Most if not all of what Whoopi says in this book rings true for me. What she has done is to say it in a straightforward manner with humor. I love the fact that she lays it all bare. This takes a lot of knowledge, experience and wisdom. Our relationships should be about us and what we want but we have to be realistic about it. She gives lots of tips.
Read more
One person found this helpful
Report abuse

Trae S
5.0 out of 5 stars LEGEND
Reviewed in the United Kingdom 🇬🇧 on September 9, 2019
Verified Purchase
It’s Whoopi Goldberg, what is there not to love?!
Read more
One person found this helpful
Report abuse

Belle
5.0 out of 5 stars Absolutely loved it!
Reviewed in the United Kingdom 🇬🇧 on March 3, 2016
Verified Purchase
Great read. Only hope Whoopi writes another book pronto. Loved the humour. You can't help but read it with Whoopi's voice in your head. Wise words, common sense and a truckload of amusing tales. Looked forward to picking it up.
Read more
One person found this helpful
Report abuse

Poetic Justice
4.0 out of 5 stars Four Stars
Reviewed in the United Kingdom 🇬🇧 on June 3, 2017
Verified Purchase
Whoopi Goldberg. The woman can do no wrong......
Read more
Report abuse

Gymnast1961
5.0 out of 5 stars Five Stars
Reviewed in the United Kingdom 🇬🇧 on August 16, 2017
Verified Purchase
not as good as the other one I bought
Read more
Report abuse
See all reviews