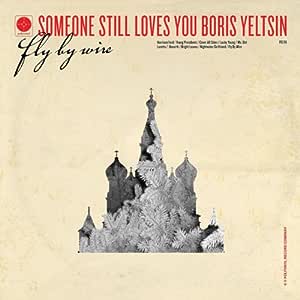 Someone Still Loves You Boris Yeltsin returned to the attic where they made their debut full-length Broom. Phil Dickey, Will Knauer, and Jonathan James spent up to twelve hours a day working on the songs that would become Fly By Wire. With James assuming the role of engineer, Dickey and Knauer wrote lyrics and guitar parts on a third floor windowsill and recorded vocals in the staircase. This laid-back approach to recording is clearly evident in the album's warm, welcoming sound.

T. Sun
4.0 out of 5 stars Good if it's your thing.
Reviewed in the United States on June 14, 2014
Verified Purchase
This album is definitely youthful and indie. It's upbeat enough for a bit of fun listening. It's not quite mellow, but not quite energetic. It's good for driving. If you like music that is a bit on the organic side and not too mainstream and like adolescent boy vocals like the kind Foster the People features, this is totally for you. I liked "Loretta" and "Cover All Sides" is my favorite track. I gave this four stars because I didn't whole-heartedly love this album. Even so, I still enjoyed the music. I actually am pretty surprised this band isn't getting more attention, which is sad.
Read more
One person found this helpful
Helpful
Comment Report abuse

John M
5.0 out of 5 stars Great band, great album.
Reviewed in the United States on December 1, 2013
Verified Purchase
It's a crime that more people don't know this band. One of those albums that you can let play all the way through without needing a Fast Forward button. For the record, I've enjoyed everything that this band has put out, but this album is now amongst my favorites. The production is a bit more indie than on their last effort (Sway), and the songwriting and production are more consistent. Give it a preview (especially "Lucky Young" and "Nightwater Girlfriend") and then do yourself a favor and click "Buy".
Read more
3 people found this helpful
Helpful
Comment Report abuse

aaron wawra
5.0 out of 5 stars Amazing
Reviewed in the United States on December 23, 2013
Verified Purchase
Great album! All the songs are amazing and it's a awesome price for a full album of awesome music, plus it's rad supporting an up and coming band
Read more
2 people found this helpful
Helpful
Comment Report abuse

Donald E. GillilandTop Contributor: Rock Music
5.0 out of 5 stars Pleasing for a Reason
Reviewed in the United States on April 10, 2015
Why isn't this band MUCH better known and loved in Indie Rock circles? Hmm, maybe they aren't moody enough or something. Honestly, they have all the right ingredients; songs with hooks and energy and a vibrant vibe, plus a very good lead vocalist. To my ears they sound like a cross between Ben Kweller and the poppier side of Smashing Pumpkins. Or, exploring the Pumpkin connection even further, this music is also in the vein of the glorious pop-rock groove that James Iha explored on his two great solo albums.

Okay, maybe it's that weird band name that is the problem, or at least a handicap. Certainly, there is nothing very political or "communist" in the song lyrics. all of which are reprinted on the inner gatefold sleeve of the CD. Some songs have a quiet, introspective aura, while other tunes pick up the pace and run with it, shimmering melodies sticking in the listener's head.

Call it what you want: Indie-Rock, Pop-Rock, Power-Pop, or anything else. But there is no denying that this is really good music!