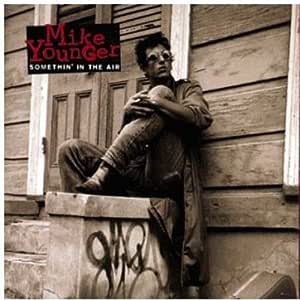 Somethin' In The Air

This star-on-the-rise began his recording career as a homeless street musician (he got his big break when he was booked to play live on a New Orleans radio station). It was Rodney Crowell who brought him to the attention of Beyond Music, who signed Younger immediately after hearing him play in NYC. Produced by Crowell, this album features the 1st radio track, "Somethin' in the Air." Mike is a key artist on Sept.-Oct. Starbucks Tour in the nation's top 20-30 markets.

Before "Autumn Wind," the plaintive solo-acoustic opener, winds down, Mike Younger has already captured your attention. Younger literally came out of nowhere with this debut: after traveling from town to town, guitar in tow, he ended up in New Orleans, where a spot on WWOZ parlayed itself into a label deal, and now this stunning record. Producer Rodney Crowell dexterously fills in the sonic landscape with help from the Dead Reckoning crew, but focuses attention squarely on Younger, his soulful, pinched whine of a voice and his world-weary (at age 27) songs. The centerpiece here is the six-minute title track, a vivid summary of his days on the street, when "the steel benches and the pavement get harder by the minute" and where "Santa Claus is havin' a heavy conversation with himself, he won't be comin' 'round this year, he's lost all his elves." Mostly, though, his songs are reflective, introspective analyses that both question and defend his choices in lifestyle and relationships. With his vibrant harmonica and his effortless adaptations of classic blues and folk structures (not to mention his cover pose), he's sure to remind people of a young Dylan. He also calls to mind other "new Dylans," with the Southern-soul affinity of Steve Forbert, the streetwise rants of early Springsteen, and the absolute assertiveness and vocal potency of Steve Earle. Ultimately, like all of those touchstones, he's his own man, a confident and unique artist who produced one of the great overlooked gems of 1999. --Marc Greilsamer