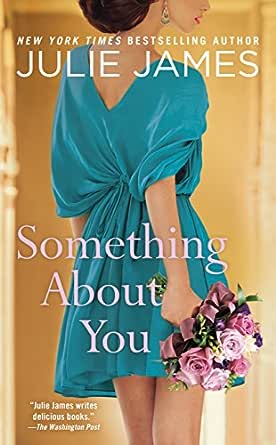 You've subscribed to FBI/US Attorney! We will preorder your items within 24 hours of when they become available. When new books are released, we'll charge your default payment method for the lowest price available during the pre-order period.
Update your device or payment method, cancel individual pre-orders or your subscription at
Your Memberships & Subscriptions 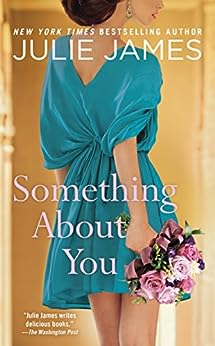 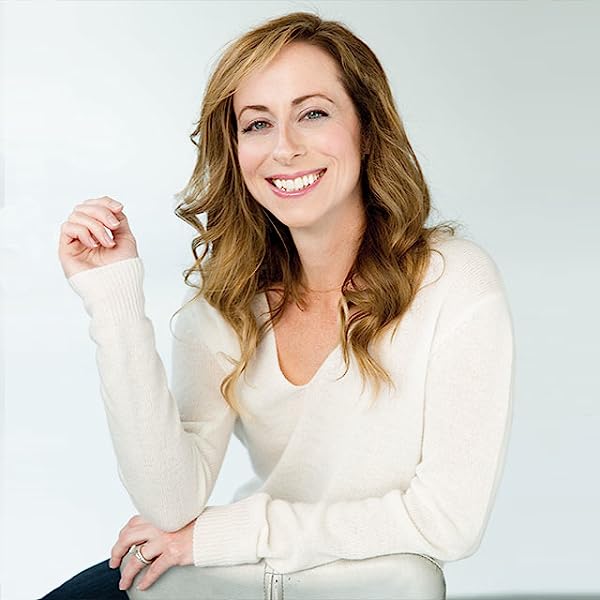 Something About You (FBI/US Attorney Book 1) Kindle Edition 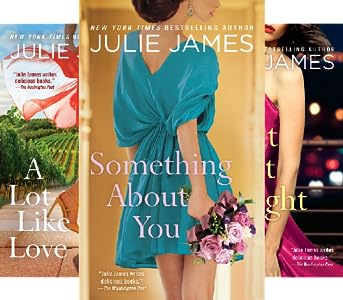 When a high-priced prostitute is murdered in the neighboring hotel room, sole witness Cameron Lynde�s safety is in the very capable but unforgiving hands of FBI special agent Jack Pallas, who thinks she sold him out three years ago on a case involving the Chicago Mob. As an assistant U.S. attorney, she�s fully cognizant of the risks, especially since the client caught on videotape engaging in kinky sex is the well-known, married U.S. senator from Illinois, recently appointed chair of the Senate Committee on Banking, Housing, and Urban Affairs. But as the murderer closes in, Jack and Cameron must put aside their differences to stay alive and solve the case. James has crafted another sizzling, vibrant contemporary legal romance set in her hometown, with edgy banter and edge-of-your-seat encounters between the forces of law and those corrupted by access to power. The sequel, A Lot Like Love (2011), continues the Martino investigation subplot with another FBI agent, Jack�s friendly rival, Nick McCall. --Lynne Welch --This text refers to an alternate kindle_edition edition.

"James has a knack for writing those perfect-for-a-day-at-the-beach [listens]." ---Book Binge --This text refers to an out of print or unavailable edition of this title.

Julie James is a New York Times and USA Today bestselling author of contemporary romances. Her books have been listed on the American Library Association's Reading List for Top Genre Novels, Booklist's Top 10 Romances of the Year, and have been featured as one of Cosmopolitan magazine's Red Hot Reads.

Karen White has been narrating audiobooks since 1999, with more than two hundred to her credit. Honored to be included in AudioFile's Best Voices and Speaking of Audiobooks's Best Romance Audio 2012 and 2013, she is also an Audie Award finalist and has earned multiple AudioFile Earphones Awards. --This text refers to an out of print or unavailable edition of this title.
Read more

4.5 out of 5 stars
4.5 out of 5
404 global ratings
How are ratings calculated?
To calculate the overall star rating and percentage breakdown by star, we don’t use a simple average. Instead, our system considers things like how recent a review is and if the reviewer bought the item on Amazon. It also analyzes reviews to verify trustworthiness.

Alex
5.0 out of 5 stars Absolutely wonderful!
Reviewed in the United States on January 28, 2018
Verified Purchase
I LOVE this book and it's one of my favorites! I would classify this as contemporary romance though there is a mystery and some suspense included. It has a nice blend of both genres as well as some great comedy. The writing was really enjoyable, especially the witty banter between the characters. The pace was a bit slow in the beginning as the story was established and the heat doesn't kick up between Jack and Cameron until about 40% but I never really felt bored by the story. All parts of the story were well fleshed out and there was plenty of backstory as to the conflict between Jack and Cameron. We actually get a bit of a flashback to the case they were working on three years ago and though I liked having all the information, some of this could have been summarized more to pick up the pace in the first half of the book.

But what I enjoyed the most about this book was the characters, from our hero and heroine to our side characters. Cameron was a wonderful heroine; she's intelligent, tough, and a dedicated woman who really seems to have her life together. I especially liked that she didn't fight having FBI protection and she understands that she's in danger. I hate when romance heroines refuse protection; I mean come on, independence isn't as important as your life. Cameron doesn't have this problem and it clearly demonstrates she's the smart person we're told she is. I also really loved her friendship with Amy and Collin and I'm glad that Julie James included so much of them in the story because all MCs should have friends to round out their lives.

It didn't take long for me to fall for Jack and his glowering, gruff demeanor that really hides a soft marshmallow inside, at least where Cameron is concerned. He's understandably angry when they are first reunited because he believes she's the one who got him transferred three years ago. However, he never lets that interfere with Cameron's safety and once things are cleared up he's not afraid to show Cameron how much he wants her. Jack is very much an alpha male but he's not obnoxious about it and in fact the few times Cameron and Jack butt heads, it's a wonderful battle of wills. But the wonderful banter isn't just reserved to these two because Jack and his partner Wilkins have some great conversations. I would love to have Wilkins' story because he seems like such an easy going and funny guy and he was a great foil for Jack's more serious personality.

Everything really worked for me in this story and I was really impressed by Julie James's writing and her storytelling. The chemistry between Jack and Cameron is great and though things start off a bit slow, the development of their relationship is genuine and a joy to read.

Assistant U.S. Attorney Cameron Lynde is staying in a hotel room next to an adulterous (and vocal) politician and ends up witnessing a murder, sort of. Since she may have seen and definitely heard something that means she’s not going anywhere anytime soon. And as if that wasn’t bad enough, Special Agent Jack Pallas is in charge of the investigation and yup, he still blames Cameron for almost ruining his career a few years ago. Now Jack and Cameron have no choice but to minimize the sarcastic jabs, tone down the resentment and work together but without those two elements, Jack and Cameron have to confront their simmering attraction which couldn’t happen at a more inconvenient time.

Jack and Cameron’s snarky banter was a big part of the draw of Something About You. I love a good enemies to lovers romance and this was definitely a good one. Both characters are driven and successful in their careers but they also have strong personalities that just clashed and built up the physical attraction well. I was pleasantly surprised that given their past neither Jack nor Cameron was ever cruel to one another while they were sniping and snarling. That would have been a deal breaker for me. Instead Julie James gave their relationship that special zing that had me anxiously awaiting their breaking point. It was so worth it too! I liked both characters and totally felt that unresolved tension.

Even when he wasn’t sure he even liked Cameron, Jack made sure that he did his job and protected her and that makes him swoon worthy in my book. Cameron was a strong willed woman but she wasn’t stupid, she knew she couldn’t defend herself against an unknown enemy and while she may have had her differences with Jack, she worked well with him when it came to solving the identity of the killer.

Mixed with the romance is quite a bit of action and suspense that amped up my enjoyment of the overall book. The anticipation of the “final show down” kept me engrossed for hours on end. The one thing I would have liked better is if the villain’s identity would have been kept a secret. I prefer finding out things at the same time as the characters do.

Final Verdict: Julie James has a knack for delivering a story with humor, heat, and heart. I’m totally on board for more books!
Read more
3 people found this helpful
Helpful
Report abuse

Doctor Mom
5.0 out of 5 stars These books have grown on me.
Reviewed in the United States on July 8, 2016
Verified Purchase
I love Julie James books. At first I found her female characters too similar to each other and a little too bitchy, but they have grown on me. As a professional woman myself, I can relate better to her characters -- intelligent and self secure career women -- than what I could ever relate to the air-headed young "heroins" of, (for example), the Twilight Saga and Fifty Shades, which left me nauseated with their self-deprecation.

I read this book out of order, after having already read some of the subsequent ones from the series. I can see the author has evolved in her writing, mostly positively. Point of view is a little more all-over-the place in this book than in subsequent books. Sex scenes are more sparse in this book than in later ones, yet the building up and anticipation was the greatest than in any other of her books I've read. Don't get discouraged by the first few chapters where the characters hate each other so much it makes you want to roll your eyes at the cliche.

Jedz
3.0 out of 5 stars Okay
Reviewed in the United Kingdom on January 22, 2017
Verified Purchase
This book started well and really grabs you in however by half way it became a bit predictable and tame, it was an easy read but I personally prefer more gritty and sassy approach. There were some mildly amusing parts and I liked the characters but not really one for me, I am glad I purchased this as a used paper back saving myself money rather than downloading it to my kindle, had I have paid the kindle price I would have definitely been disappointed and it would have been a two star review.
Read more
Report abuse

Amazon Customer
1.0 out of 5 stars Sugary sweet
Reviewed in the United Kingdom on September 27, 2019
Verified Purchase
FBI agents were more like Cinderella 's fairy godmothers, it started out well and chemistry appeared to have potential then everything got ridiculous about 50% in.
Read more
Report abuse

Kindle Customer
3.0 out of 5 stars Easy & Enjoyable Read.
Reviewed in the United Kingdom on March 18, 2016
Verified Purchase
I enjoyed this book as it was a light and easy read. I felt there could have been more 'meat' to the thriller side of the book however it's a romance story so that's understandable. I will probably read the other book in the series as I liked the characters. In summary, I liked the book but didn't love it.
Read more
Report abuse

Kindle Customer
4.0 out of 5 stars Good read
Reviewed in the United Kingdom on January 25, 2014
Verified Purchase
This is essentially a story about a FIB agent protecting his witness and how they get together. it has a good story, pleasant characters and is readable.
Read more
2 people found this helpful
Report abuse