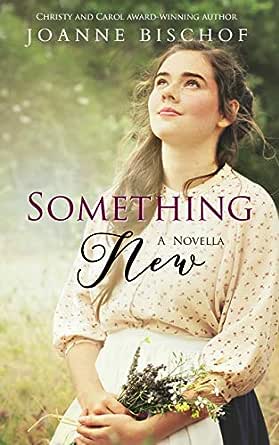 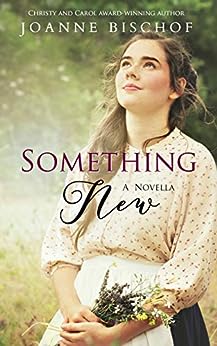 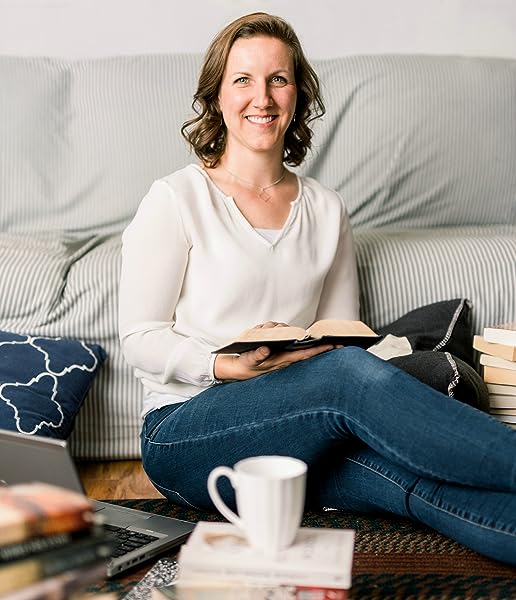 Something New: A novella Kindle Edition

Knowing her minutes in the garden were nearly spent, Wren savored the warmth of the sun on her shoulders. This place of refuge and quiet--especially with twin brothers to look after. And with the sound of footsteps drawing near, it was about to come to an end.
"Hello, Little Bird," said a deep, smooth voice.
Wren froze. A gasp caught the air in her chest, and she clamped her mouth shut. That was not one of her brothers. Heat rushed her cheeks. Then down to her toes. Eyes trained on the dark soil, she couldn't lift them. She knew that nickname. No one had called her that since she was a girl. Slowly she looked up.
Tate Kennedy peered down on her.
Short hair shoved back haphazardly, the faint shadow of a beard on his jaw, he smiled pensively. Not the lighthearted grin she'd always known.She'd heard distant rumors of his coming--but like snatching leaves on the breeze, she hadn't been able to catch hold of much. No hope of heart, she'd written it all off.
For folk had speculated before.

Phyllis - Among the Reads
5.0 out of 5 stars Another wonderful novella by Joanne Bischof
Reviewed in the United States on September 26, 2019
Verified Purchase
Something New follows in the grand tradition of all books by Joanne Bischof. You will feel the rolling of the ship in the storm; smell the wildflowers in the garden, ache with the labor of felling trees. And you will be drawn into a story full of longing and hope, written in a language which is rich and compelling.

I love Wren's innocence and sweet, gentle ways. Her love for Tate started back when they were both children and she tagged along behind him as he went from adventure to adventure.

Tate had always loved Wren. Even when he was thousands of miles and an ocean away, he never stopped thinking about her. Everything he did was motivated by his love and the goal he had of returning to her and giving her a home.

Prepare to have your heart melted in this beautiful story of love and sacrifice.

Rebecca Maney
4.0 out of 5 stars Beautifully Penned!
Reviewed in the United States on September 16, 2019
Verified Purchase
"I think Wren had to convince herself that your bond couldn't last forever."

Sometimes the lost is simply found; on other occasions, what returns is better than what was removed. But in the interim, trust can be broken. Understandably, Wren Cromwell's belief in Tate Kennedy's childhood promises had not only waned, it had nearly expired. Four years had passed; four long years at sea for Tate, and four long years at home for Wren; without a word.

Beautifully penned, this heartfelt story of "something new" will bring tears to your eyes and warmth to your spirit, for starting over is an adventure that Wren hesitates to accept.

"I never wrote you any letters, but I was writing you in my heart."
Read more
Helpful
Report abuse

Meagan Babcoe
5.0 out of 5 stars Beautiful
Reviewed in the United States on September 1, 2019
Verified Purchase
I adore anything by Joanne Bischof and this novella is no exception! The only thing I wish for is that it was longer. Fortunately though Wren and Tate are in Daughter of Northern Shores so we get to see them again. If you haven’t read Sons of Blackbird Mountain and Daughter of Northern Shores you absolutely have to! The beauty that is captured is beyond words. Ms. Bischof writes in a way that plays through the readers mind like a beautiful movie that you don’t want to end. Her words paint a picture in your mind. I highly recommend this novella and all things Joanne Bischof!
Read more
One person found this helpful
Helpful
Report abuse

Pam K.
5.0 out of 5 stars Something New
Reviewed in the United States on September 12, 2019
Verified Purchase
Wren and Tate met at school when they were young and became fast friends. When Wren was 15 and Tate 19, he and his brother Timothy left home to work on ships. Though Tate loved Wren, he knew she wasn't ready so he thought distance would be best. After four years of missing her, Tate returned to Virginia. Wren was heartbroken when he left without a word so she isn't ready to risk her heart again. Tate is ready to settle down now and has to prove he is trustworthy. This is a lovely addition to the Sons of Blackbird Mountain and Daughter of Northern Shores books that I enjoyed very much.
Read more
Helpful
Report abuse

Jennifer Thompson-Thalasinos
4.0 out of 5 stars A love returns...
Reviewed in the United States on December 26, 2019
Verified Purchase
This is an enjoyable novella about two childhood friends, Wren and Tate, who are reunited after Tate sails away to find his fortune. Coming back after 4 years, he finds Wren grown up and skeptical about his motives. She also finds him suffering from a bad infection after getting cut by a fish hook. As Wren and her mom help him heal, Tate finds himself trying to prove to Wren that he’s ready to settle down, with her. A clean romance for teens and above.
Read more
Helpful
Report abuse

Janine R
5.0 out of 5 stars Soothing to the soul
Reviewed in the United States on October 24, 2019
Verified Purchase
After getting to meet Tate in Daughters of Northern Shores and admiring his strong character, I was eager to read his story. This novella was a sweet story about young love reunited and the ways we things we do for the people who mean the most to us. It soothed my soul and reminded me how much I love Joanne Bischof and this series. My only complaint is that it ended too soon!
Read more
Helpful
Report abuse

Susan Snodgrass
5.0 out of 5 stars Precious Story.
Reviewed in the United States on September 1, 2019
Verified Purchase
‘He’d eat boiled potatoes a lifetime over if he could just sit across the table from Wren Cromwell.’

I adore Joanne Bischof’s work. Her books are do deeply heartfelt. She crafts her characters so well that the reader is drawn completely into their lives. I loved Wren and Tate. Highly recommended.
Read more
Helpful
Report abuse

Aimee Brown
VINE VOICE
4.0 out of 5 stars So Sweet
Reviewed in the United States on September 14, 2019
Verified Purchase
How very, very sweet and gentle. I loved this tender story of reconnecting love and I loved Tate. He has to be the sweetest man ever. His devotion was demonstrated in his every thought and action. 💙
Read more
One person found this helpful
Helpful
Report abuse
See all reviews