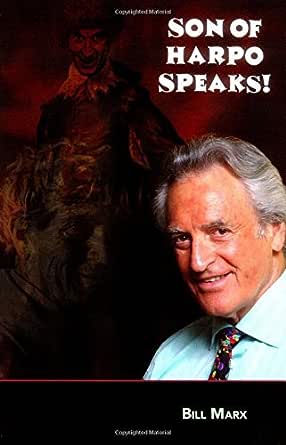 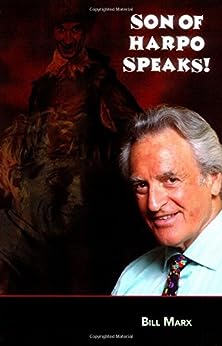 Bill Marx (Los Angeles, CA) studied composition at Juilliard in New York City. He has composed numerous works for the concert world, motion pictures, television, theater, and ballet. He has produced, arranged, and performed as a pianist on many recordings with notable jazz and pop artists and on two albums with his father, Harpo Marx. --This text refers to the paperback edition.

R. Glueck
4.0 out of 5 stars Bill Marx stands on his own!
Reviewed in the United States on February 21, 2013
Verified Purchase
I have a rather large library of books concerning the Marx Brothers and consider myself to be as well versed as anyone with regard to the lives of the principle three actors, Harpo, Chico, and Groucho. I originally purchased "SoHS" with hope of further insight to the lives of Gummo and Zeppo. I got that, but only a minor spoonful of what I really wanted to know. Instead I got a healthy serving of how Harpo and his beloved Susan lived, worked, and raised their four kids. You'd think that was enough, but it isn't. Harpo's oldest son has plowed forth in life, full of naievity that required a sore education in the school of hard knocks. Gifted and intelligent, Bill Marx narrates his education as a Marx child, a celebrity's son, a man forced into growing up with some burdens similar to our own, and some unique. I found amazing parallels to my own life in his writing until I realized, they aren't so amazing! On the other hand, through a remarkable series of coincidences, Bill learns about his ancestry, who his birth mother was, why he was put up for adoption, and why he is still loved by his late parents; all of them.

There is a stream of consciousness Marx Brothers movie included in the end of the text, and I could have done without it, but for whatever reason it is there. Some of Bill's stories are so funny that I literally burst out laughing and woke up my wife in doing so. The goldfish in the clinic being one.

I the end, I have to say, I wish I knew Billy Marx more intimately as a friend, a buddy, a pal. I still have questions about Uncles Gummo and Zeppo, but I know Bill very well, just as he knows me. And we haven't yet met in person.

If you are a confirmed Marxist, and frankly, you won't be reading this unless you are, this is a necessary component of your library. Harpo would give it five honks, I gave it four. You should honk it yourself.

Tea&BookLover
4.0 out of 5 stars Wonderful, charming book...
Reviewed in the United States on March 16, 2019
Verified Purchase
I really enjoyed this from Bill Marx. It's filled with his musical life, school days and family life. Plenty of photos too. Plus it seems that Bill Marx is truly a terrific, kind man with a gentle spirit. I can see where his father Harpo was the same way.

The only thing I wish it had more of was talking about his siblings. Both when they were younger and now that they are older. And Bill is still playing piano at places! I hope to be able to go see him. I'm so glad he wrote this book. It's just like a friend sitting and talking with you.
Read more
2 people found this helpful
Helpful
Report abuse

Dennis M. Davis
4.0 out of 5 stars More concerning Bill than Harpo
Reviewed in the United States on January 23, 2016
Verified Purchase
This book was more like Billy Speaks. I read Harpo Speaks many years ago and still have my copy which I loved!! This is more about Bill Marx than Harpo even though Bill was a Marx. It's more his story than more about his father, which he loved very much and I don't blame him since a lot of people loved Harpo. Very interesting story from Bill and his life, I really liked it a lot.
Read more
4 people found this helpful
Helpful
Report abuse

lindsay devereux
4.0 out of 5 stars Recommended for all the "Fans"
Reviewed in the United States on February 29, 2012
Verified Purchase
As a big Marx Bros fan I have a collection of all movies and most books.
I was happy to have the opportunity to purchase this latest addition for my library.
Would like to have discovered more "untold stories" of the Marx Bros
and there are a few new ones in here. Suppose most have been covered before in previous books.
Bill Marx does a competent job with the Autbiogrpahy and is very grounded and honest.
Recommended for all the "fans"
Read more
11 people found this helpful
Helpful
Report abuse

Paul F. Goodman
4.0 out of 5 stars Great Companion piece.
Reviewed in the United States on October 28, 2016
Verified Purchase
Not the book to read for a lot of information on his dad, Harpo Marx. However if you read Harpo Speaks this is a great companion that expands on the family story through the eyes of the eldest son. I really enjoyed it and his class and humor.
Read more
3 people found this helpful
Helpful
Report abuse

Richard Bergman
4.0 out of 5 stars Read Bill Marx' story
Reviewed in the United States on August 19, 2017
Verified Purchase
Bob Marx had a very interesting and individual history. He is probably the luckiest guy in the world. He was adopted by Harpo Marx, and was a gifted musician because his birth parents had musical talent. His story is very interesting with lots of interesting stories of celebrities of a long-gone era. I found it very entertaining and easy to read. I recommend it!!
Read more
One person found this helpful
Helpful
Report abuse

Coffeelover
3.0 out of 5 stars Second-Hand Interesting
Reviewed in the United States on June 9, 2017
Verified Purchase
Quite interesting when the author talks about his family and their famous relatives and friends. When he talks about his own life and career -- not so much.
Read more
3 people found this helpful
Helpful
Report abuse

Suds
5.0 out of 5 stars A special book about a special man
Reviewed in the United States on November 10, 2017
Verified Purchase
For those who remember the Marx brothers, especially Harpo, this is a warm and fuzzy read. Once one hears Bill Marz perform, it is even more fun to read
Read more
2 people found this helpful
Helpful
Report abuse
See all reviews

Wingate
3.0 out of 5 stars Daddy Dearest
Reviewed in the United Kingdom on August 9, 2013
Verified Purchase
I have read books written by the children of famous parents and the majority of them have something nasty to say about their parents.Not though in this case.The author clearly remembers his parents in the most loving terms and has only the fondest and happiest memories of them.Whilst it is touching to read nevertheless it gives very little drama or cutting edge to the book.It also causes a problem.Once Harpo dies,at around page 200 the book rather goes downhill,unless you want to learn more about the author.He clearly is a talented musician but his life after Harpo is not of any great interest.However if like me you are a fan of the Marx Brothers it is nevertheless worth reading.Incidentally if you go on to Youtube you can actually hear a short recording by Harpo so we can actually hear we he sounded like.Obviously not unlike his brothers.He doesn't have a strong accent that would have caused him problems.However we are lucky that he never chose to speak so that we can still enjoy this marvellous clown.
Read more
6 people found this helpful
Report abuse
See all reviews