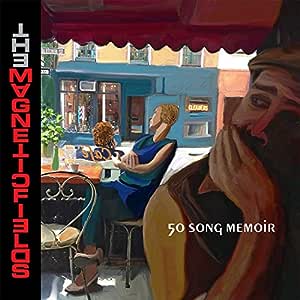 The Magnetic Fields Format: Audio CD
4.5 out of 5 stars 56 ratings
See all 5 formats and editions Hide other formats and editions
Includes FREE MP3 version of this album.&nbspProvided by Amazon Digital Services LLC. Terms and Conditions. Does not apply to gift orders.&nbspComplete your purchase to save the MP3 version to your music library.
Available at a lower price from other sellers that may not offer free Prime shipping.

Nonesuch Records releases the Magnetic Fields’ 50 Song Memoir on March 3, 2017. The five-CD / five-LP set chronicles the 50 years of songwriter Stephin Merritt’s life with one song per year; it was produced by Stephin Merritt with additional production by Thomas Bartlett and Charles Newman. On tour, the Magnetic Fields perform the 50 Song Memoir over two nights per city, beginning tomorrow and Saturday, November 18 and 19, at MASS MoCA in North Adams, MA, and continuing at the Brooklyn Academy of Music (BAM) on December 2 and 3. Further dates begin in spring 2017. 50 Song Memoir is available in five-LP and five-CD editions including an extensive interview by Daniel Handler and facsimile handwritten lyrics by Merritt, and as a standalone bound book with a full-album download card.

Merritt began recording on his 50th birthday: February 9, 2015. Unlike his previous work, the lyrics on 50 Song Memoir are nonfiction—in Merritt’s words, “a mix of autobiography (bedbugs, Buddhism, buggery) and documentary (hippies, Hollywood, hyperacusis).” As he says in the album’s liner note interview with his friend, the author Daniel Handler, “I am the least autobiographical person you are likely to meet. I will probably not write any more true songs after this than I did before, but it’s been interesting working on it.”

In addition to his vocals on all 50 songs, Merritt plays more than 100 instruments on 50 Song Memoir, ranging from ukulele to piano to drum machine to abacus. In concert, the music will be played and sung by a newly expanded Magnetic Fields septet in a stage set featuring 50 years of artifacts both musical (vintage computers, reel-to-reel tape decks, newly invented instruments), and decorative (tiki bar, shag carpet, vintage magazines for the perusal of idle musicians). The seven performers each play seven different instruments, either traditional (cello, charango, clavichord) or invented in the last 50 years (Slinky guitar, Swarmatron, synthesizer). The stage extravaganza will be directed by the award-winning Jose Zayas (Love in the Time of Cholera, Aunt Julia and the Scriptwriter).

Linda A. Merritt
5.0 out of 5 stars His mother loves the album
Reviewed in the United States on May 21, 2017
Verified Purchase
I loved but then I am Stephin's mother, and the painter of the portrait of Stephin on the cover.
Read more
87 people found this helpful
Helpful
Report abuse

voomer
5.0 out of 5 stars Easily their best album since 2004's "i"!
Reviewed in the United States on May 18, 2017
Verified Purchase
Apparently Stephin Merritt works best when he gives himself a big challenge, because this collection is an amazing return to form! 69 Love Songs is the obvious reference point given the ambitious scope of both projects, but this collection of songs has a much different feel -- it has a greater cohesiveness owing both to the autobiographical origins of the stories, but also because these 50 songs are not as schizophrenically diverse as those on 69. A very good chunk of the songs on 50 Song Memoir sound like a world-wise 50 year old writing songs in the style of "Holiday." I'm one of those who feel "Holiday" was one of the Magnetic Fields' best moments, so the plethora of melodic synth-heavy tracks on these discs is quite welcome -- especially see disc 3 in this regard. Another big chunk of songs have a nostalgic or melancholy feel, and they are truly lovely -- some achingly so -- and have a deeper poignancy because of their emotional truth. Even the stylistic oddballs land, with only a very few exceptions. This is an album that merits many many listenings. His lyric writing is in top form. The production is exquisite. It is not yet clear whether there are as many absolutely timeless melodies as there are on 69 Love Songs or their other best albums, but I am only several listenings in to what is really a profoundly impressive song cycle. I'm so happy for Stephin who, with this album, erases any doubt that he should be considered among the greatest, most distinctive, of American songwriters.
Read more
8 people found this helpful
Helpful
Report abuse

Madley
5.0 out of 5 stars Five Stars
Reviewed in the United States on April 14, 2017
Verified Purchase
A long and adventurous musical journey everyone should take.
Read more
2 people found this helpful
Helpful
Report abuse

Kevin McCallister
4.0 out of 5 stars Buy it!
Reviewed in the United States on September 27, 2017
Verified Purchase
It is completely awesome. Some songs are super sad, others laugh-out-loud funny. Just what you expect from S.M.
Read more
One person found this helpful
Helpful
Report abuse

Jan
5.0 out of 5 stars Good cd
Reviewed in the United Kingdom on February 4, 2018
Verified Purchase
Arrived in time and is just what my son had asked for for Xmas
Read more
Report abuse

Dave Combden
5.0 out of 5 stars Five Stars
Reviewed in Canada on March 29, 2018
Verified Purchase
One of the best albums I own, absolutely recommended for fans of Stephen Merritt.
Read more
Report abuse
See all reviews