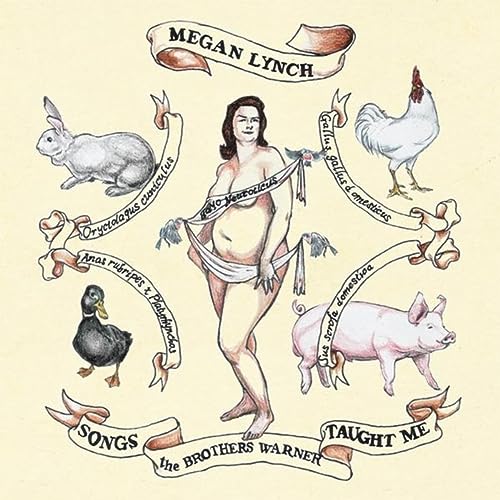 Songs The Brothers Warner Taught Me

hyperbolium
4.0 out of 5 stars Vocalist and acoustic duo reanimate jazz-age cartoon classics
Reviewed in the United States on April 1, 2010
Warner Brother's cartoons - the classics drawn in the 30s, 40s and 50s - connect to modern-day audiences with surprising timelessness. Surprising, because if you look beneath the frenetic humor, you'll find period details threaded throughout. Nowhere were early twentieth-century totems used more regularly than in the soundtracks. Composer Carl Stalling regularly quoted Tin Pan Alley songs in his background scores with a literality that vexed his animators, and selected songs were sung by the characters. Even then, these classics were typically reduced to a line or two that highlighted an action or emotion, rather than sung all the way through. Most of the songs, as songs, remain a mystery to even ardent Warner Brothers' fans.

This disc features new performances of a dozen songs sung or played in classic Merrie Melodies and Looney Tunes shorts, opening with the memorable "Hello Ma Baby." Famously sung by Michigan J. Frog in "One Froggy Evening," Lynch expands on the Jolson-esque chorus quoted in the cartoon with the classic's ragtime verses. Perhaps even more iconic is "Shuffle Off to Buffalo," the title of which was often used as shorthand for a quick exit. Here the lyric is revealed as a post-nuptial love song whose expectation of wedding-night bliss is surprisingly scandalous. Other tunes, such as "It's Magic" and "It Can't Be Wrong," were used mostly as mood melodies, so hearing them sung is like being introduced rather than reintroduced.

Lynch is a talented vocalist who uses portamenti and trills to conjure the jazz age. The acoustic accompaniment, including lazy fiddle solos, chipper ukulele and haunting turns on the saw give these songs a chance to unfold, and separated from the frenzy of a cartoon they unfold and flower. Still, when anyone croons "Someone's Rocking My Dreamboat," it's hard not to imagine Bugs Bunny floating idly to a South Pacific island in (the un-PC) "Bugs Bunny Nips the Nips" or carried in a barrel in "Gorilla My Dreams." Lynch is joined in reanimating these classics by the Tony Marcus (guitar, mandolin, fiddle) and Robert Armstrong (national steel guitar, banjo, accordion, ukulele, saw) of the Cheap Suit Serenaders, with appearances by Steven Strauss (bass, ukulele) and Brandon Essex (bass). [©2010 hyperbolium dot com]
Read more
5 people found this helpful
Helpful
Report abuse

Monkey
5.0 out of 5 stars Wonderful evocative music
Reviewed in the United States on March 31, 2010
It is wonderful to hear these remakes of modern folk bluesy songs by Megan Lynch. One of the more interesting albums to listen to if you want to learn what musical interests helped influence our earlier society and what they considered important. This is an album that will be of interest to anyone interested in music, music history or music theory. The shadings of guitar, banjo, and voice are brilliantly executed in this collection of songs aptly titled "Songs the Brothers Warner Taught Me." Overall, an interesting walk down memory lane and rerecorded for today, this is an interesting album to purchase or download and will fill out anyone's musical library. Megan Lynch and group have done a very good of putting passion and fun into these recordings. Well worth owning and listening to over and over again, rated 5 of 5 stars with a definitive thumbs up for this album.
Read more
One person found this helpful
Helpful
Report abuse

Rick U.
5.0 out of 5 stars Wonderful new versions of songs you loved!
Reviewed in the United States on February 10, 2010
This CD is a sweet collection of songs we all know, or think we do. Carl Stalling et al. did over-the-top versions for the Warners cartoons, but Ms. Lynch does them jazzy, folksy, authentic. Her voice is startlingly strong and clear. She is an amazing vocalist, and has some great musicians helping her out. Listen for Bob Armstrong (One Flew Over the Cuckoo's Nest) on musical saw! Buy this one!
Read more
One person found this helpful
Helpful
Report abuse

WorldofHiglet
5.0 out of 5 stars Evocative, warm, sensual and fun!
Reviewed in the United States on June 30, 2011
The Warner Brothers hold a special place in my heart. As a kid Saturday was cartoon day, and the Loony Tunes were definitely my favourite. This album is in turns soulful, exhilarating and pure joy - your ears and your heart will thank you for purchasing it. Megan Lynch and her musicians give new life to these old tunes and you will be humming them for days.

We loved "Songs The Brothers Warner Taught Me' so much we chose it as a soundtrack for our new webseries, "Mind My Brains, Darling!" - I can't recommend it more highly than that!
Read more
3 people found this helpful
Helpful
Report abuse

AkaFrank
5.0 out of 5 stars Do yourself a favour and buy this NOW!
Reviewed in the United States on July 17, 2012
Megan's voice is amazing, the songs she chose to put on this album are great and you'll remember all or at least most of them. Listen to the samples and you'll see that you simply must purchase this album and put Megan Lynch on your watch list as an artist :)
Oh and also, I ADORE the cover!
Read more
Helpful
Report abuse

Aden Pennington
4.0 out of 5 stars A must for any Warner Bros fan!
Reviewed in the United States on March 25, 2010
This is a great selection of your favorite Warner Bros. songs. The arrangments are fresh and appropriately quirky. Megan Lynch has a strong, soulful voice that compliments the material. This is a perfect addition to your Warner Bros. collection.
Read more
2 people found this helpful
Helpful
Report abuse

AKGOLD
5.0 out of 5 stars Remaking lost memories
Reviewed in the United States on July 2, 2011
Instantly a family favorite. Lynch does righteous justice and then some to the kitschy history of American music via the brothers Warner. She not only pays homage to the Looney Toons originals, but she totally owns these songs. A must have.
Read more
2 people found this helpful
Helpful
Report abuse

E. Newton
5.0 out of 5 stars Wonderful concept, masterful execution
Reviewed in the United States on February 3, 2010
This is a really fun album for all ages and the musicians are top notch. Ms. Lynch's voice and phrasing are truly superb.

If you're like me, and have many fond memories of watching classic cartoons, you'll really enjoy this record. It was a blast to hear these songs in their original, intact version.
Read more
3 people found this helpful
Helpful
Report abuse
See all reviews