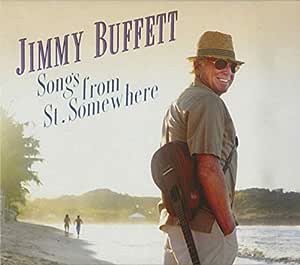 Secure transaction
Your transaction is secure
We work hard to protect your security and privacy. Our payment security system encrypts your information during transmission. We don’t share your credit card details with third-party sellers, and we don’t sell your information to others. Learn more
Details
Ships from
Amazon.com
Sold by
Amazon.com
Songs From St. Somewhere has been added to your Cart

Save with Used - Very Good
$7.56
FREE delivery: Sunday, March 7 on orders over $25.00 shipped by Amazon.
Ships from: Amazon
Sold by: clicknship

Jimmy Buffett Format: Audio CD
4.5 out of 5 stars 659 ratings
See all 6 formats and editions Hide other formats and editions
Includes FREE MP3 version of this album.&nbspProvided by Amazon Digital Services LLC. Terms and Conditions. Does not apply to gift orders.&nbspComplete your purchase to save the MP3 version to your music library.
Available at a lower price from other sellers that may not offer free Prime shipping.

Parrothead alert: Jimmy Buffett has a new studio CD, "Songs From St. Somewhere", with 15 brand new recordings, plus a bonus track. The album was recorded this spring in various locals including Key West, Nashville, Austin, Miami, and St. Barts.

The first single "Too Drunk to Karaoke" is a duet with Toby Keith. Jimmy and Toby are currently shooting a video for the song, directed by Michael Salomon.

Other song titles are "Somethin' 'Bout a Boat", "Einstein Was A Surfer", "I Want to Go Back to Cartagena", "Tides", and "Useless But Important Information"

The bonus track is "I Want to Go Back to Cartagena", a Spanish version duet with the Latin singer Fannie Lu.

4.5 out of 5 stars
4.5 out of 5
659 global ratings
How are ratings calculated?
To calculate the overall star rating and percentage breakdown by star, we don’t use a simple average. Instead, our system considers things like how recent a review is and if the reviewer bought the item on Amazon. It also analyzes reviews to verify trustworthiness.
Top reviews

Charles E.
5.0 out of 5 stars Pure Jimmy
Reviewed in the United States on June 6, 2018
Verified Purchase
I don't get or understand the negative reviews. Not a home run and not as good as Banana Wind or Barometer Soup but as good as the other ones in between those two--OK, Fruitcakes was probably better. I have been a Parrot Head since we lived in Ocean Springs MS from 1983-1999. Jimmy's grandparents lived in the same County (Jackson)and his folks were in Mobile 45 miles down the road, Jimmy has a Bachelors Degree in history from the University of Southern MS and I have a MA in history from the same school so maybe I am biased but I love the music and life style that he has promoted. We have not been in the Keys since 2000 but now live in the golden triangle of the Upstate in SC and it is over 900 miles to Key West but I feel a road trip coming in my future. Parrot Heads will like this album just fine. I like it!
Chuck

Jeff & Wendy S
VINE VOICE
4.0 out of 5 stars A wonderful, relaxing, atmospheric album...
Reviewed in the United States on October 27, 2013
Verified Purchase
I've been a Buffett fan for about 30 years, but he doesn't get an automatic passing grade from me if he doesn't deliver. Let me set the stage by saying I was not exactly thrilled by most of his last album (Buffet Hotel) or some of his other less-than-stellar albums (Beach House on the Moon) - although they too had some gems.

I found this album to be a very pleasant surprise. While most of his "modern era" albums took several listenings to appreciate, this one had its appeal on the first listen. I read some of the negative reviews and they just go to show that everyone has different tastes, even among fans. Contrary to some reports, I think this is a very melodic and catchy set of songs, with only a few mild klunkers - but remember, this CD has 16 songs on it... back in the vinyl days, 10-12 max was the norm, so I can forgive a few filler pieces. If I were to make an album of the 10 best songs on this CD, I would probably give it 5 stars.

The most commercial and bouncy of the songs, "Too Drunk to Karaoke" and "Earl's Dead" are my LEAST favorite tracks on the album - they try too hard to go after the country crowd that embraced his "License to Chill" album (which I like quite a bit, but it took me a long time to warm up to). Like Jimmy, I'm getting older and growing up, and I appreciate his more subdued approach with this album. I feel like he made an album that he wanted to make, not just one to make money.

The clear but mellow vocals, exquisite acoustic music makes wonderful music to relax or work to. A few of the songs, "Einstein was a Sailor" and "I'm no Russian" are a bit repetitious and probably won't get you singing along, but even they are fun songs. "Useless but Important Information", "Tides" feel like below-average filler.

And other songs are are simply beautiful and close to perfect: "Something About a Boat", "I Wave Bye Bye", "Colour of the Sun"

My other favorite artist is Mark Knopfler, so of course, I dig "Oldest Surfer on the Beach" with Mark sitting in and providing his own distinctive beach sound.

BOTTOM LINE: This isn't beach party music for twenty-somethings. It's dinner party music for us mature fans. If you like Buffett ballads, you will almost certainly love this album. If Jimmy's bouncy and/or country tunes are your only interest, you might think about skipping this one.

Steve Mix
3.0 out of 5 stars Essential ONLY for true Parrotheads
Reviewed in the United States on April 19, 2018
Verified Purchase
Three great songs and the rest meh. Tides, Somethin’ Bout a Boat, and Oldest Surfer on the Beach are the jewels. Most of the other songs have excellent potential and solid instrumentation, but a bit dull. Reminds me of the Don’t Stop the Carnival and Off to See the Lizard. Good albums unless you compare them to the rest of Bubba’s catalog.
Good background music when you are having a party and everyone’s talking.
Just saw him live and he did no songs from this one and his performance was amazing. Hopefully he has another Buffet Hotel or Take the Weather with You (or Banana Wind!!) in the future.
Read more
One person found this helpful
Helpful
Report abuse

Jack Beggs
2.0 out of 5 stars More Like Somewhat Flat Country Pop
Reviewed in the United States on October 29, 2014
Verified Purchase
The CD's listing calls it Adult Contemporary.
I would not quarrel with that Genre for Jimmy's work, I guess.
My wife and I would really prefer Adult Caribbean or Adult Tropical or ...................,
ever since we took our first trip down there ............

But this is none of that either. The Genre built into the MP3 files is Country Rock. And that is more what it is.

Don't be fooled by the song titles. If you are looking for songs with the flavor and personality and compelling Caribbean feel like that in "Meet Me In Margaritaville", this will be disappointing.

None of the songs are really bad songs. But it feels like Jimmy set out to do new songs LIKE Meet Me In Margaritaville songs but missed. 50 to 60 % are more Country Pop rather than the Buffett real deal.

Another way to look at it is to compare this music to any of the great concerts on Margaritaville TV. Think about the sound and the emotion and the instruments used in those, like the steel drums. There is VERY LITTLE of that in these songs.
Read more
5 people found this helpful
Helpful
Report abuse

Newrider
4.0 out of 5 stars Jimmy Buffett 'Songs from St. Somewhere'
Reviewed in the United States on September 24, 2013
Verified Purchase
First I should say that I am a huge ParrotHead, so I'm bias in my review. I think this is a great album. It's not a '3 quarter time', or 'Son of a Son', however, I think this album stands out on many fronts. It has reggae, blues, country, and others you can only call 'Buffett Music'. It does have that one song aka '5 o'clock somewhere' in 'To drunk to karaoke', which is with one of the new country stars that emulate Buffett music, as they all seem to be doing now a days, the beaches, boats, drinking, sand, and flip flops method. I only that hear that stuff on the muzak in restaurants etc......I guess that's a complement to Jimmy. I believe that to any Buffett fan, you'll like this very much. It would not be a good 'break in' album from those unfamiliar with with his music, but you never know. But it's great for me, and it's been many years in the making, 4 or 5 years since his last studio album. Just as an aside, Jimmy is best to experience live, much like the Dead, as then when you come home and put it on and it will sound all different then.. I must admit however, his videos leave much to be desired, I've seen them all, and by far, the best was that benefit concert for the Gulf oil spill that was broadcast free on the country music station. I still have that saved on my DVR. I hope this has been informative to someone, at least I've tried. FINS UP!
Read more
One person found this helpful
Helpful
Report abuse
See all reviews

stuart mcniff
5.0 out of 5 stars Great new album from JImmy Buffett
Reviewed in the United Kingdom on September 19, 2013
Verified Purchase
Great new album from JImmy Buffett. As JImmy Buffett matures in years, his style has taken another turn. This album is a natural continuation of the journey he took us on with Buffett hotel.
If you like JImmy Buffett, you'll love this new album, if JImmy Buffett isn't your type of music, then why are you even looking at his material.
Buffett makes music for Buffett fans, he makes no excuses for that. He and his coral reefer band are a huge draw in the USA whilst being relatively unknown in the UK and Europe.
Read more
3 people found this helpful
Report abuse

bradders1289
5.0 out of 5 stars Thank you Mr Buffett, you have made my Dad's day
Reviewed in the United Kingdom on August 5, 2015
Verified Purchase
My Dad and his friends love this album. It did take a bit of convincing at first but after a couple of listens they are hooked! I read other reviews that said it was more like Jimmy Buffett had gone back to his roots in his song writing and style, even though there are no tracks like Cheeseburger in Paradise, this album sounds more mature and a better way to get into his music.
Read more
Report abuse

Amazon Customer
5.0 out of 5 stars Jimmy Buffett
Reviewed in the United Kingdom on October 3, 2020
Verified Purchase
Anything by Jimmy is great
Read more
Report abuse

Buttons
5.0 out of 5 stars Sunshine indoors.
Reviewed in the United Kingdom on September 16, 2015
Verified Purchase
Jimmy Buffett what else is there to say. It's a shame he's not more popular in this country. His songs make the summer and this album makes the sun shine. Maybe one day l will go back to Cartagena.
Read more
Report abuse
See all reviews