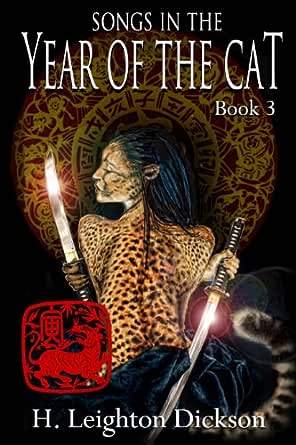 You've subscribed to The Rise of the Upper Kingdom! We will preorder your items within 24 hours of when they become available. When new books are released, we'll charge your default payment method for the lowest price available during the pre-order period.
Update your device or payment method, cancel individual pre-orders or your subscription at
Your Memberships & Subscriptions
There was an error. We were unable to process your subscription due to an error. Please refresh and try again. 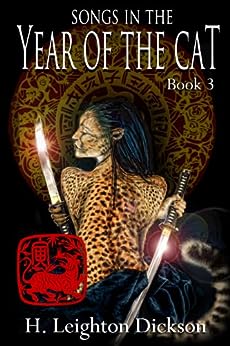 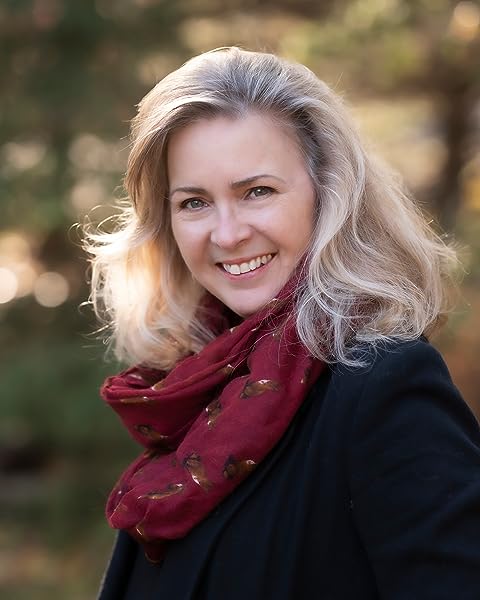 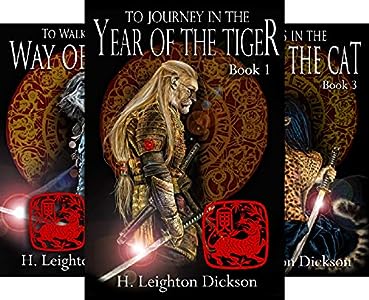 H. Leighton Dickson grew up in the wilds of the Canadian Shield, where her neighbours were wolves, moose, deer and lynx. She studied Zoology at the University of Guelph and worked in the Edinburgh Zoological Gardens in Scotland, where she was chased by lions, wrestled deaf tigers and fed antibiotics to Polar Bears by baby bottle! She has been writing since she was thirteen and pencilled her way through university with the help of DC Comics. She has three dogs, three cats, three kids and one husband. She has managed to keep all of them alive so far.

A successful indie author, Heather has written the Scifi/Asian fantasy Upper Kingdom series along with Gothic thriller series, COLD STONE & IVY as well as the award-winning DRAGON OF ASH & STARS: The Autobiography of a Night Dragon. She also writes for Bayview Magazine, speaks at book conventions and is a photoshop wizard when it comes to book covers.

Come join the conversation at hleightondickson.com or on Facebook at facebook.com/HLeightonDickson

4.7 out of 5 stars
4.7 out of 5
62 global ratings
How are ratings calculated?
To calculate the overall star rating and percentage breakdown by star, we don’t use a simple average. Instead, our system considers things like how recent a review is and if the reviewer bought the item on Amazon. It also analyzes reviews to verify trustworthiness.
Top reviews

Vashist Reddy
5.0 out of 5 stars Of love, lovers, babies, monsters and warriors
Reviewed in the United States on July 30, 2019
Verified Purchase
When a female author writes about love stories, you are bound to be touched. Continued from the second installment of the series, this one is more nuanced and emotional. Yes as you continue reading, you will be prepared for the culmination of the much anticipated climax soon (one more book to go). But along the way, you will get a glimpse on how the heart respond, how nuanced is love indeed. H. Leighton Dickson has masterfully interwoven romances and duties and sacrifices in this new installment. In love, there is no barrier. And love and war are inseparable, intertwined, complement to each other, the two sides of the same coins. All the characters are developing superbly as you continue with the series. Some are still rigid as markings on stones, but I sense well that with the incoming lessons in the next book, they will sure be softened and transformed just like we all are in the real life.
Personally I find myself related to the various characters of this series. I would have like to know the secret to write such beautiful stories. There is a profoundness in the narration, it is never shallow, and the author has done an amazing work in mixing the various spiritual traditions in her work. At 2.99 dollar each book, this is a bargain. Grab it quick and be mesmerized, for I am sure you will.
Read more
Helpful
Report abuse

Richard Kirka
5.0 out of 5 stars Now things REALLY get interesting!
Reviewed in the United States on February 16, 2014
Verified Purchase
Starting out from the POV of an average Feline-in-the-streets, the story arc has gone on to introduce more engineered life forms, legends of long-gone Ancient peoples, and more interaction, friendly and otherwise, with other races as trade and transportation begin to advance. Some of the things that remain mysterious to them we, as readers, are all too familiar with as major blunders from our own past. It makes you want to shake your favorite character by the scruff of his/her neck, and scream, "Why can't you at least create your own ORIGINAL disasters?". [Disclaimer: not recommended if you're a fan of Major Ursa, but you'd probably know that by now :) ]

Then I realized that their languages, literature, and geography differ from our present world, But much survived, at least enough to keep scholars and a new breed of explorers busy. But over the millennia since the original nuclear disaster, fragmented groups of humans tried to save what was left of their race, along with any of the hard-won knowledge the we managed to achieve before we flushed a lot of it down the toilet.

But at least one "school" of humanity survives to the day of the story, living a bunker mentality in giant underground shelters powered by a technology long past the maximum straining point. They are as amazed to see their creatures, and how far they've advanced, as the creatures are to see them. And a few wise ones on both sides are starting to realize that NOBODY is out of the woods yet. Everyone will have a lot of catching up to do, if nobody starts any more wars, first.

As I follow the trail of breadcrumbs, just as some "treasure seekers" find old, broken wrist watches, one of my biggest questions remains, who translated the original human classics of history and literature into their new languages? Is someone sitting on a gigantic stash of human knowledge still in the original languages, and why?

And why are there three (now two) colony ships parked in geosynchronous orbit over the Indian Ocean? [My personal extrapolation, and not intended as a spoiler, since that will probably be resolved only in the last book. I need my "fix" with Book Four right now, if just for the temporary relief of getting the answers to the smaller mysteries.]

This would be a great story universe even if everyone wore human form. If you've sworn never to read anything involving "fur", make this your one exception. It has solid adventure, romance, "history", and post-apocalyptic elements to satisfy anyone else, too.

[Why does the Feline with the most gorgeous fur (Major Ursa), also have to be the most homicidal?]
Read more
4 people found this helpful
Helpful
Report abuse

Knightmare94
4.0 out of 5 stars Excellent Series Continues
Reviewed in the United States on August 31, 2013
Verified Purchase
Having read the first two installments of H. Leighton Dickson's captivating series, I was rewarded by having the experience of the third being published just when I finished the second. How often does that happen? I was able to leap directly from the end of the gripping second novel into the third, which picks up exactly where the last one left off.

I've already heaped praise on Dickson's writing in my first two reviews, and that excellence doesn't change here. Dickson is outstanding on presenting her world of combined elements of China, India, and Japan, but her character building is even stronger, and ties the story together. The characters reunite after the last books dramatic ending to try to unite the kingdom against the coming of the Ancestors. In order to do that, everyone must commit to peace.

I can't say much without spoilers from the last story, but if you've read the previous book then you'll understand how improbable that plan of action is. Kirin, now the Shogun General of the Upper Kingdom, must try to make peace with the savage people he has every reason to hate, not to mention Ursa, Sireth, and the others.

But diplomacy and honor must take precedence, particularly in the face of the coming threat, as we see through flashbacks from Kerris and Fallon's time spend overseas in the land of the Ancestors. Let's just say that humanity is as prejudiced and oppressive as ever. In the Upper Kingdom, cats are joined by monkeys to form a powerful army that will face the wild throngs of Dogs that have formed their own army under a powerful Khan who is much more concerned with war than peace. In the middle of the conflict are a Dog Seer and her brother, and of course Sherah, the mysterious Alchemist who might hold the answer to the riddle of peace.

Once again, Dickson steers the reader along a journey with characters that serve a purpose, whose motivations and personalities alter and adapt to their ever-changing circumstances. This book is larger in scope, so some characters are regretfully limited in their impact. I was particularly interested in the monkeys, as their race wasn't introduced in the first two novels. Unfortunately they didn't get much exposure in this novel and I wasn't sure quite how to picture them. Hopefully a future installment will expound. But as a whole the writing was satisfying as ever, and a solid resolution to a three-part act. The ending leaves room for future installments, which I will definitely look forward to. H. Leighton Dickson is now high on my list of favorite authors.
Read more
One person found this helpful
Helpful
Report abuse
See all reviews

Amazon Customer
5.0 out of 5 stars This series just gets better and better
Reviewed in the United Kingdom on July 24, 2020
Verified Purchase
Book one was a freebie and since I started it I have read nothing else, and I usually have at least two on the go at once. Characters I have fallen in love with and a story that just does not let up. Prepare to give up life and sleep when you start this series
Read more
Report abuse

Gilis
5.0 out of 5 stars Five Stars
Reviewed in Canada on March 23, 2017
Verified Purchase
the series was amazing. Truly from book 1 to 3.
Read more
One person found this helpful
Report abuse

Ms. A. Stephens
5.0 out of 5 stars Good read
Reviewed in the United Kingdom on August 18, 2013
Verified Purchase
I thoroughly enjoyed this book, I found it imaginative and gripping. I felt fully invested in the characters and found the action well paced. I look forward to reading more from this author and have my next one loaded and ready to go.
Read more
Report abuse
See all reviews