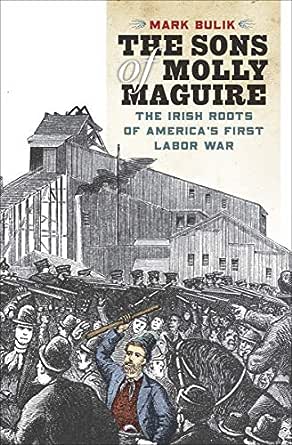 Mark Bulik's 'The Sons of Molly Maguire: The Irish Roots of America's First Labor War' is a work of considerable scholarship, which carefully unpicks the tightly braided strands of ethnic, labor and party politics in the mid-nineteenth-century coal fields, especially the west branch of Schuylkill County. Drawing on the extensive research, he illuminates the competition between the Irish and other immigrant groups, and, most interestingly, the regional, class and generation tensions within the Irish community itself.---―Breandan Mac Suibhne, Dublin Review of Books

Bulik's unfailingly interesting book has a fascinating story to tell. His analysis of the Irish roots of the Mollies is excellent and in line with the tendency of US historiography to extend analysis beyond the borders of the nation. His accounts of the battles between the Mollies and the forces of law and order in Schuylkill county are well-written ... he does a service in stripping away some of the grey mist from the Mollies. This book will appeal to both a general and an academic audience., Capital & Class

Mark Bulik’s The Sons of Molly Maguire is an engaging and enlightening work of historical research and scholarship. As well as bring into focus the Mollies’ role in giving America its first taste of class warfare, Bulik’s incisive and original explorations sweep aside myths, legends, half-truths, and untruths. He significantly deepens our understanding of these flesh-and blood laborers, who they were, where they came from, and how their struggle resonated through the labor movement in the United States. Thoughtful, insightful and unfailing fair, The Sons of the Molly Maguire is history at its best.---―Peter Quinn, author of Looking for Jimmy: A Search for Irish America

“Mark Bulik’s The Sons of Molly Maguire is a superb work of scholarship. Focused on origins, this work situates the Irish emergence and American persistence of the Molly Maguires in all of their considerable complexity, while likewise ably revealing not only the crucial developments of the 1870s that have embedded the Mollies in American memory but also the factors contributing to the Mollies’ continuing legacy extending into the present.”---―James P. Leary, University of Wisconsin

With deft writing and impressive research, Mark Bulik offers a new explanation for a conflict that shook the very foundations of post-Civil War America. The Molly Maguires were at the center of America’s first great labor war, but as Bulik shows, the first shots of that war were fired not in northeastern Pennsylvania, but in the fields and villages of Ireland.---―Terry Golway, author of Machine Made: Tammany Hall and the Creation of Modern American Politics --This text refers to the hardcover edition.

MARK BULIK is an assistant news editor at the New York Times. He is a graduate of Georgetown University and lives with his wife and two children in West Caldwell, New Jersey. --This text refers to the hardcover edition.

A gripping history that peels away layers of myth and misinformation surrounding the “Mollies” to cast brilliant new light on one of the nation’s longest and most murderous industrial conflicts --This text refers to an alternate kindle_edition edition.
Read more

Patrick H. Campbell
3.0 out of 5 stars The Irish Roots of Molly Maguires
Reviewed in the United States on February 4, 2016
Verified Purchase
Well researched book on the history of secret groups in Ireland in the early decades of the 19th century, among them a group named the Molly Maguires. However, if you are expecting details on the Molly trials and executions in the 1870s you should look elsewhere. A more complete account of the Molly episodes in the 1870s can be found in Coleman's The Molly Maguire Riots; Kevin Kenny's, Making Sense of the Molly Maguires; and my own book, A Molly Maguire Story, Revised Edition. {2015]
Read more
6 people found this helpful
Helpful
Comment Report abuse

Andy in Washington
TOP 1000 REVIEWERVINE VOICE
4.0 out of 5 stars A Great Book on A Strange Time
Reviewed in the United States on January 1, 2015
I grew up in the coal regions of NE Pennsylvania, and thought I knew something of the Molly Maguires and their struggles against the coal barons of the mid and late 19th century. I evidently did not know anywhere near as much as I thought I did

* Mark Bulik has done his homework. He traces the Molly Maguires from their rise in the counties of Ireland, and directly relates the struggles of Pennsylvania coal miners against mine owners to the plight of Irish tenant farmers and absentee landlords. .The degree of similarity of their tales is amazing.

* For those readers like myself, who are primarily interest in the mining history of the anthracite regions of Pennsylvania, there is plenty in the book to make it a worthwhile read. It built on some of the facts I already knew, including the often-contentious relationship between the miners, mine owners and railroads, and how each had a turn being in the proverbial driver’s seat.

* Bulik is at his best when describing the more human side of the struggles. He captures the futility of a miner working all year, and because of the company store system, actually owing money to his employer. We see the ability of the coal companies to directly affect the health and well-being of a black-listed “troublemaker”, and of course the mine superintendent who disappears on a dark road one evening.

* I learned much from the book. As an example, I always assumed the “Mummers” were a bunch of guys that liked string bands and going to parades in lavish costumes. I never realized their connection to the Irish labor organizations, their violent past, or their true origin. Fascinating stuff.

* While the book is “academic quality” in its research and references, the writing style is easy to read and not the convoluted 200 word sentences that seem to be a requirement of “serious, academic” non-fiction.

* Bulik’s topic is the Molly Maguires, not the labor struggles of Pennsylvania. As a result, a good portion of the book, maybe one third, is a journey through the history of Ireland and its secret organizations. And to be honest, this part of the book was hard to follow, and to keep straight the roles and tactics of various Irish organizations. And I never did quite understand the transitions of these organizations from Ireland to the US. There were groups of the name names, but it was unclear the exact relationship, if any, to the original Irish factions.

* Some of the book was a bit repetitive. I started to lose patience with the phrase “dressed in women’s clothing” when describing the Irish mobs enforcing the discipline of the various secret societies. I got the point after the first twenty times it was mentioned.

* Bulik avoids making conclusions. The book details much of the individual acts of the Molly Maguires and their associates, but stops short of analyzing the results. Did they ultimately benefit or cost the average miner? Were they responsible for the decline of the coal companies and rise of the railroads as the true power brokers? Were any of their violent tactics justifiable? Did the combative nature of the United Mine Workers and later unions build on the Molly Maguires, or were they a dead end? To me, these are the fascinating parts of the story, and Bulik gives them glancing coverage.

I enjoyed the book, and would recommend it to anyone with even a passing curiosity about the struggles of Irish labor unions and secret societies and/or the coal mining struggles of 19th century NE PA. My personal preference would have been to slightly shift the focus of the book more of an economic analysis, but the author certainly gets to choose his topic. I found the book to be an enjoyable read, and looked forward to picking up the book.
Read more
7 people found this helpful
Helpful
Comment Report abuse

paquinn47
5.0 out of 5 stars Bulik has written a ground breaking history that adds a ...
Reviewed in the United States on May 1, 2017
Bulik has written a ground breaking history that adds a whole new chapter to the history of the the American labor movement, particularly its Irish-American dimension. Over the years, I found that accounts of Irish America treat it in a vacuum, ignoring the deep roots in Irish history. Bulik offers an importantl corrective. Two other recent books do the same: Terry Golway's revisionist history of Tammany Hall, "Machiine Made," and Irene Whelan's "The Bible Wars in Ireland." Bulik carries the story of America's class war forward to the present day. I read a lot of history. This is up at the top of the list.
Read more
2 people found this helpful
Helpful
Comment Report abuse