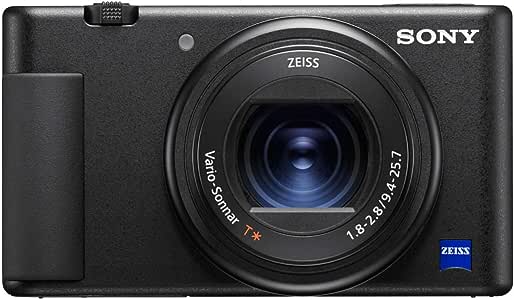 Visit the Sony Store
4.6 out of 5 stars 360 ratings
| 119 answered questions
Amazon's Choice recommends highly rated and well-priced products.
Amazon's Choice for "sony zv1"
Available at a lower price from other sellers that may not offer free Prime shipping.

Recreate the world in your image

The ZV-1 is designed to bring together simplicity and power, opening up creative opportunities as wide as your imagination.

The ZV-1 design makes creating outstanding selfie and vlog content easy. Right down to the last detail, the ZV-1 is all about empowering you to make inspirational content.

4.6 out of 5 stars
4.6 out of 5
360 global ratings
How are ratings calculated?
To calculate the overall star rating and percentage breakdown by star, we don’t use a simple average. Instead, our system considers things like how recent a review is and if the reviewer bought the item on Amazon. It also analyzes reviews to verify trustworthiness.

Hakim
3.0 out of 5 stars The camera comes without a charger
Reviewed in the United States on June 12, 2020
Style: Camera onlyColor: BlackVerified Purchase
Beware that the camera comes without a charger. It's kinda a bad move especially for those who never owned a sony camera before.
Read more
150 people found this helpful
Helpful
Comment Report abuse

MustangsbyMatt
1.0 out of 5 stars Great camera with a fatally flawed battery cover design.
Reviewed in the United States on July 5, 2020
Style: Camera onlyColor: BlackVerified Purchase
This vlogging centric camera has a fatal flaw that makes it useless for vlogging. The tripod mount is integrated into the battery cover. Meaning, every time you have to change the battery, you have to remove the tripod mount to do so. And if you're on the move, like one who is vlogging tends to be, it's a major hassle every time you need to do a battery change. Also, the SD card is integrated into the cover as well, so be prepared to do an awful lot of tripod mounting and dismounting if you buy this camera.
Read more

Mindy
TOP 1000 REVIEWERVINE VOICE
4.0 out of 5 stars A comparison to DSLR and smart phones
Reviewed in the United States on June 14, 2020
Style: Camera onlyColor: BlackVine Customer Review of Free Product( What's this? )
I'm a semi-professional photographer and I always jump on the chance to review cameras because I love them. This one is such a unique product that I'm really excited about it. My review will mainly be a comparison of whether or not you should get this camera (the Sony ZV-1) as opposed to a DSLR or even smart phone.

*DO NOT get this camera if your main interest is still photographs. If you want still photographs then the DSLR is what you want. This camera has the added perk of taking photos, but the main focus of this is video content sharing.

*The highlight of this camera is the ease of use. You really don't need to know technical things like which aperture to choose, which ISO or shutter speed, it does everything for you. It has auto focus (which is much better than on DSLRs) and the flip screen makes it easy to monitor yourself while you're recording.

*The size of this makes it far superior to a DSLR. This thing is *tiny* and so lightweight. If you get the accessory kit with the wireless grip/tripod, you are good to go. This is especially good if you vlog while walking or need to be active when speaking to the camera.

*Benefits over just a regular 'ol smartphone: The image sensor on this is much bigger and better. With image sensors, the adage is "the bigger the better" which is why DSLR cameras have such an advantage (but they're also too big to lug around) This makes your image quality much higher. The microphone on this is also way better too. (With the DSLR, you would need to buy a separate mic.) You are free to buy a separate mic with this camera as well but the mic that it comes with is pretty good right out of the box.

*Things that could be improved: The software it comes with is rather limited. Especially for editing videos, though on the plus side, you may not need to do too much editing if you are the type that just does your vlogging in one continuous take.

*The lenses are built in/ not interchangeable. This is good in that you have everything you need at all times, but bad if you scratched/cracked your lens you would need to buy a whole new camera.

*There's no flash - this shouldn't be an issue for vloggers though. Just wanted to mention in case someone was still thinking of getting this solely for still photography.

*The battery life was middling. It wasn't great but I've seen other cameras perform worse. If you feel like you're going to be having long sessions, I would consider getting a second battery just in case.

Overall, I think this is a great and versatile camera for those who vlog or create video content. The price is higher so you can buy a DSLR at this price point, however if you're not into technical things or would rather something more user friendly then this is definitely the route to take.

jypfoto
5.0 out of 5 stars Fantastic option to create family memories, vlogging is ok in most situations
Reviewed in the United States on June 20, 2020
Style: Camera onlyColor: BlackVerified Purchase
Let me start out by saying that I've used dozens of cameras over the past few years as a bit of a gear head. I've had full frame DSLRs, full frame mirrorless, APS-C options, micro 4/3's, etc. Most recently I had the Fuji X100V. Having a growing family I realized that while I love taking pictures of my kids growing up, what really captures the interest of everyone is capturing videos. I could take 1,000 pictures from a family trip and the things that the family will want to see is the video, not the pictures. For this I realized that having a more compelling video option was needed. In addition having a 7 year old girl, she's starting to want to make her own videos, which I post to her private YT channel.

Pros
- Having a compact option with a decently fast lens. The lens could be wider, it could be longer. There's a lot of could haves. Why not ask for a 12-500 mm lens? For what it is, it's a good compromise, has a decent enough range and fast lens, which is needed for a 1" sensor. The 24-200 would've been too slow to shoot indoors without an external light.
- The front flip screen. It makes talking head videos easier to shoot, putting it on a tripod and still having a hot/cold shoe for an external mic or a light source is fantastic.
- Button layout. Having a record button, having a tally light are great.

Things to note
No, the stabilization is not the best. On standard it's not great. On active it's better but crops in. This is why I say for certain types of vlogging, like on a tripod or talking head video it's fine. If you're expecting to walk around and talk to yourself, you'll want to invest in a gimbal. No, the battery isn't the best. Luckily they're tiny and you can find plenty of generic options. No, you don't get a charger in the box. Most cameras these days are not shipping with one. No you won't get the ultra thin depth of field from this, it's a 1" sensor, there are limitations.

For the price, the size, the features, it's the best option that I've found at the present time. It's not perfect, but any camera enthusiast will tell you that there isn't. It's about weighing the positives and the negatives and find the one with the most plusses and the least amount of negatives for your needs. Think about it, if the perfect camera existed, you'd have no compelling reason to upgrade to the next model, so in a way you have to think that manufacturers intentionally withhold a little here and a little there.
Read more
90 people found this helpful
Helpful
Comment Report abuse
See all reviews

Daniel Desjardins
3.0 out of 5 stars A much better webcam
Reviewed in Canada on November 7, 2020
Style: Camera onlyColor: BlackVerified Purchase
Great improvement over my iMac webcam but the tone on flesh looks a bit syntethic even with the softener turned off
Read more
Report abuse