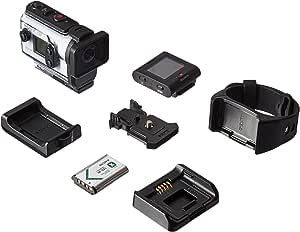 4.4 out of 5 stars
4.4 out of 5
67 global ratings
How are ratings calculated?
To calculate the overall star rating and percentage breakdown by star, we don’t use a simple average. Instead, our system considers things like how recent a review is and if the reviewer bought the item on Amazon. It also analyzes reviews to verify trustworthiness.

jefFnurk
4.0 out of 5 stars Fantastic A+ camera, but think twice about the accessory package
Reviewed in the United States on September 20, 2017
Verified Purchase
So, after a couple of days of research between the GoPro and Sony 4k camera options, I went with the FDRX3000R/W. The camera itself is great and is a 5 star experience. Great picture, image stabilization, and a world of settings and options. In this price range, there is simply no better option.

I do kind of regret buying the whole package of options, and I'll explain why to maybe help others to make an educated decision about what you may need.

First is the Live-View Remote - it's nice and works well, however I should point out that Sony makes free iOS and Android apps that link to this camera and control it and run it very well with a world of options and control. You can't control all settings with it (several you still have to set using the on-camera LCD display), but all of the ones needed for effective shooting and recording experience are there - and you also can't control them with the Live-View remote either. I've linked it to my iPhone, and my old Android Galaxy phone, and Nexus 7 tablet, and it works flawlessly with all 3 over the WiFi link connection. So much so, where I haven't actually used the Live-View Remote since the week I bought the camera. I might see a situation in the future where I'll use it, but as I've dedicated my old Galaxy phone exclusively to camera viewing and control when I use this camera, it won't be often. However, if you don't have a phone or tablet that you can dedicate to that, then it’s a wash. I don't recommend using your primary phone, as any switching away from the app will completely disconnect and make the app relink to the camera when you switch back - the camera will still run and continue recording anything in progress, you just can't do or control anything other than what's on the camera itself (e.g. start/stop, power on/off). Also if you lack the technical aptitude for setting up the app (it took me about 10-15 minutes to get the setup linked and working as it does require a little bit of effort and can be frustrating for technophobes or neo-Luddites) the Live-View Remote might be a good option for you. Just stating that the app interface option is far superior and preferable for most usage situations.

The other is the underwater housing. While I did not buy this to be used for underwater (or snow / water resistant) shooting, I did intend to use the case at all times as a basic camera and lens protection. Unfortunately, when shooting for long periods of time in full 4k mode, this camera becomes incredibly hot and will shut down - it will warn you about 10-30 seconds before it does this, but there's not much you can do about it. I discovered this after about 20 minutes into an hour and a half shoot of a live event. Fortunately, it's occurred for me at brief breaks in the action, and removing the camera from the housing and fanning it down enabled me to start shooting again it less than 10 minutes and it ran fine out of the casing, though still hot. Still, had I known I'd never be able to use the casing other than in an environment like shooting underwater or in the cold/snow that will cool the camera / housing, I would not have got this package.

Also, another small caveat. To shoot at 4k, at the highest speeds, you will also need a high speed U3 micro card. Even the fastest rated U1 card does not have the write speed to keep up with the camera's fastest recording speeds and highest resolutions. If this is important to you, you'll end up dropping another 80-100+ dollars on a card (suggest a 128MB min card if you plan on shooting more than 30 or 40 minutes of full hi-speed 4k footage). It shoots fine at resolutions and speeds that are less than the best with a regular U1 card, so no worries or problems to note there if high speed 4k shooting is not important to you.

As I said, I am quite happy with the camera and the quality of footage I get from it, and five stars there. However, I'd suggest looking strongly at the accessories before buying any package, and maybe just going with the camera by itself, and selecting the accessories you need à la carte. Extra batteries too - you'll get about an hour per battery.

Dave
5.0 out of 5 stars Great little 4k Camera!
Reviewed in the United States on August 24, 2017
Verified Purchase
This is my first attempt at owning an action camera. I shoot Sony for my DSLR so I figured I would see what they can offer for the rest of my camera needs.
Without knowing too much except that the GoPro's are the most popular action camera out, I couldn't help but notice how so many youtubers have posted vlogs indicating that they are switching to the X3000 over their GoPro.

The biggest benefit I've seen is the optical stabilization. Its pretty incredible to see some of the footage i've taken with this mounted to my bike and to my chest. I used to video record a lot back in the day with one of those sony handycams and even comparing to those videos, its amazing how walking seems very smooth. Granted, it will never be the same as comparing to a rig on a gimble but it does very good without it.

Of course the 4k video was something desired and this little guy works great at it. As I tend to color correct my photos, I've not mastered the profiling on video however I tend to leave the x3000 in vivid mode and I'm happy with it.

One of my biggest issues was deciding to get the bundle with the live view or not. Its an issue because Sony has not made the Live View (vr3) available as standalone purchase like their other remotes. So if you dont get the bundle and decided you want the remote, you have to either deal with your mobile phone or buying the vr2 remote. Looking at the compatibility chart, if you go with the lr2 remote, you will not be able to do some of the functions on the x3000 camera. Its looks like the App makes up for it.

So i did go for the for the live remote and for the most part I am happy. Some have complained that with this remote, you are required to dock it into a base to charge it, and yes I see how this can be a pain where if you simply had the usb port on the device itself, you can just plug & charge. I wonder if it was designed this way to make it more water proof??

If I had a wish granted, it would be that sony would have developed a waterproof housing that would allow the live remote to work underwater. Sony has a "Finger Grip" [ B01HD7EIVY ] that allows you to mount the live view remote to the camera and give you a more familiar camcorder experience. However the this doesn't solve the problem of trying to use the live remote underwater. Once underwater, Wifi & bluetooth don't work. So if Sony would have developed an enclosure that would keep the communication open between the cam & remote while allowing you to view the remote.. well that would be freaking sweet!

I know it is hard for me to really review this camera as its my first entry but I feel very spoiled to jump into it now seeing that GoPro & Sony have had several shots improving this technology.

As for accessories with this camera, allow me to share what I got

Memory Card - Delkin 128gb UHS-ii [ B01N9W72SY ] : Fast enough to max out the specs on the camera and super fast for my pc when it comes to exporting data from the card. Lifetime warranty on the card as well!

Action Camera Mounts - Luxebell Bundle Kit [ B00N8JIPPC ] : Very cheap and almost everything is very useful in the kit. I was going to buy all of the Sony mount stuff but then I said for this price, it is worth to try it out, If things break in a year and i had to rebuy this kit, I still would be saving money vs the sony stuff

Battery - Sony NP-BX1 [B00CBB7P4U]: Do not overpay, Amazon is out of stock at this moment, so google search the part number and check places like B&H or Adorama. I cannot stress enough, buy multiple batteries if you plan on recording alot, the 4K 100Mbps encoding just eats through the battery. I would recommend 3 (if you record ALOT) min would be 2. I also like to stay with branded names when i can for batteries.

Battery Charger - Sony BCTRX [ B009OZVIS0 ] : Having more than 1 battery does mean you will need a wall charger. (the included battery is expected to be charged via in camera). This charger not only provides a full charge in under 2 hours, it also supports other sony batteries.
Tip, if your looking to get 1 or more batteries for this camera, get the charger/battery bundle, ACCTRBX . You will save money [ B009OZVIJ4 ]. So if you want 3 batteries, I would get the bundle then just buy your extra Sony Type X batteries!!
Read more
9 people found this helpful
Helpful
Comment Report abuse
See all reviews

A. L
4.0 out of 5 stars Pretty good video camera
Reviewed in Canada on February 15, 2018
Verified Purchase
I can't fully review this as I am still learning how to use it.

It is a really good camera so far. Video quality is great. Hasn't overheated.

Downside is that it's a bit hard to find accessories for this camera and that it didn't connect with my phone properly (app is lacking). Also don't use the camera for taking pictures. Its not that great.

Also, the screen watch is a bulky for me.
Read more
Report abuse
See all reviews