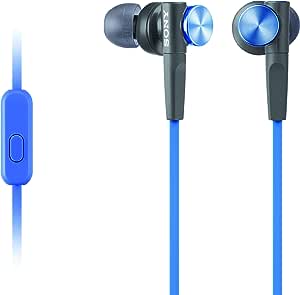 Visit the Sony Store
4.5 out of 5 stars 2,793 ratings
| 88 answered questions
Available at a lower price from other sellers that may not offer free Prime shipping.

12mm Drivers, Extra Bass Design, In-Line Mic & Remote, Sony Smart Key App Compatible, Customized Android Control; Cord Length: 3.94 ft; Frequency Response: 4-24,000Hz, 4–24,000Hz; Cord Type: Y type, flat cord. Removing the headphones: After use, remove the headphones slowly. Note: Headphones are designed to fit closely in your ears. If the headphones are pressed hard while in use or taken off too quickly, they may cause injury. Wearing headphones may produce a diaphragm click sound. This is not a malfunction. If you connect to an unsupported smartphone, the microphone of this unit may not function, or the volume level may be low. This unit is not guaranteed to operate digital music players.

For warranty information about this product, please click here [PDF ]

Warranties may no longer be valid.

4.5 out of 5 stars
4.5 out of 5
2,793 global ratings
How are ratings calculated?
To calculate the overall star rating and percentage breakdown by star, we don’t use a simple average. Instead, our system considers things like how recent a review is and if the reviewer bought the item on Amazon. It also analyzes reviews to verify trustworthiness.

namco
5.0 out of 5 stars Just WOW
Reviewed in the United States on October 9, 2018
Color: BlueProduct Packaging: Standard PackagingVerified Purchase
So I have been on a tirade of buying earbuds, from 10 dollar cheap-ies to Bose 99.99 earbuds.... and I have to say I am blown away.

First off, my use case is for my cellphone only. I use these with my Google Pixel XL like all earbuds I buy. Which means no EQ tweaking, not much power driving them, just cell phone spec usage.

Secondly, I am blown away at how well these sounds. Its crazy to have it hit so low in terms of bass, it doesn't shake your head, but it lightly vibrates your ear and you get this weird feeling because normally bass that low, you feel it more than you hear it. With these, because it does vibrate your ear a little, you can hear it, and your brain goes "shouldn't I feel this?". Which isn't a bad thing, its nice to hear details you normally don't with cheaper headphones, or headphones with specs that simply don't hit that low. The highs are crisp, the mids are clear and "flat" like they should be. I am very impressed with the sound quality of these earbuds. While I am promoting the bass, even though they are "extra bass", its not extra base in the sense of "muddy" its more like "extra base vs other earbuds" which means quality sound. Trust me, the bass is NOT overpowered.

Thirdly the fitment. Most earbuds out of package don't feel right, they don't seal in my weird ass ears and I end up playing with the various tip sizes to get a proper fit. However with the way these seal, the basic size right out the gate fit no issue, it more so rests on your ear instead of going INTO your ear. (best way for me to explain it). Think of other earbuds as a giant rock that only seals a cave entrance once its been inserted inside the cave by a few feet. Where as the sony's are like a giant boulder that seals along the outside of the cave entrance like a cover stone. I actually prefer this as they seal well which helps with the bass response.

Finally, the comparison. I have reviewed sennheisers (which I am a huge fan of their normal studio headphones, but not their earbuds) and other cheap off brand as well as cheap known brand earbuds. These sound the absolute best. Even comparing to the 99.99 bose earbuds, these sony's just sound way better. The only difference between the sony's and the bose is that if you want to lay your head down on a pillow, resting on the side of your face and ear, the bose are way more comfy and you can sleep with them in, while these protrude just a little to where you might get some ear agitation which isn't a huge deal. So at the moment I use the sony's as long as I can, and IF I sleep with my earbuds in (binaural beats use) then I will switch to the bose so I can lay on my ear with zero discomfort or ear pain.

6/5 I recommend you try these sony's. I got the blue pair as I like a little color in my life, ive had enough black and white earphones/earbuds to last a lifetime, its nice to get blue or red at times when possible. Doesn't change the overall performance of the earbuds so I highly recommend them.

Moon
1.0 out of 5 stars Broke easy
Reviewed in the United States on April 3, 2018
Color: BlueProduct Packaging: Standard PackagingVerified Purchase
I really love song but these broke within a few hours. The sound was great but the but split
Read more

SusieQ
5.0 out of 5 stars Serious Earbuds
Reviewed in the United States on March 7, 2019
Color: BlueProduct Packaging: Standard PackagingVerified Purchase
First I thought that these would be the typical earbuds that would sound fine for the day. I wore these and listened to music for 5 seconds and I was shocked. The bass is AMAZING. This is the easiest buy for 30$, with crystal-clear sound, incredible bass, and cool looks. The earbuds I got were pictured as a "light blue", but when I got them they were a darker blue with a metallic look, which looked way cooler. The structure is nice, the removable ear-pieces don't fall off so easily, but you can remove them and put them back on without a sweat. Overall I recommend this as the best sound for 30$.
Read more
19 people found this helpful
Helpful
Report abuse

Rin
5.0 out of 5 stars Simple Person, Happy Customer
Reviewed in the United States on February 21, 2018
Color: BlueProduct Packaging: Standard PackagingVerified Purchase
I love Sony earbuds, so this is quite a bias review. However, I do have a pair of old $20 Sony earbuds I’ve had for about 5 years and I thought of finally getting myself a second set. I decided on these. They’re clearly louder and have a bit more bass, mainly noticeable towards electronic music but you can hear slight sounds you never notice, like from rock music of guitar string pulls more clearly. I’m no audiophile by any means, just an average person wanting better sound even if slight for a decent price. These are of good quality, sound wise and material built wise than the earbuds I already have and can tell will last me a long time. These have a stylish look to them and for me, fit in my ear comfortably. They give you different sizes of ear pieces for different ears. People say the buds feel bulky and heavy but I don’t feel that or notice heaviness. Wonder if I have strong ears? Overall, I love them! The mic and controls are a bonus.

*Edit: Some paint have chipped off within three days. I don’t handle them brutality but the paint doesn’t stay too long. However, they still look really nice and it’s a really minor thing but a warning that if you’re really picky.
Read more
15 people found this helpful
Helpful
Report abuse

Shawn
5.0 out of 5 stars Excellent sound and product quality for a low price.
Reviewed in the United States on July 1, 2018
Color: BlueProduct Packaging: Standard PackagingVerified Purchase
If you want a great pair of earbuds that don’t cost a lot, try this one. I will be purchasing my 2nd pair, and my 1st one lasted just over 4 years and I think they just finally died. I’ve used them to listen to music and for gaming a lot for 4 years straight. Even the day before they went out, it was still great quality sound. They were originally $50-60 4 years ago, but now they’re about $30. I played call of duty competitively with them and I could hear footsteps and more things usually than teammates with $250/300 Astro headsets.
Part of it is because I have an adapter on my controller to adjust the sound (only $25 though) and I’ve used both for the 4 years and had no issues. I’ve also had a problem with every single earbud staying in my ear my entire life, even the brand “YurBuds” that came with a “Guaranteed to never fall out” but I’ve never had a problem with these falling out.
Lastly, they block out sound very well too. Other earbuds, such as Apple's, let in sound where these don't. I have even put these in without any sound to block out some sound to focus more on work. They don't act as noise-canceling earbuds, but they are decent at it.
100/100 review of this product.
Read more
11 people found this helpful
Helpful
Report abuse

NONE
5.0 out of 5 stars Extremely Durable and Good Sound
Reviewed in the United States on January 11, 2017
Color: BlueProduct Packaging: Standard PackagingVerified Purchase
These were purchased for my mother, but I can honestly say that these are the best earbuds I have ever used. Maybe not for quality of sound, they are a bit heavy on the bass (not that I am complaining, they are Extra Bass ones after all), but they are amazingly durable. I have owned the first pair that I purchased for almost three years now, and they have been used for college, running the tractor, working out, dirt biking, yard work, etc. They have actually even been washed four times. The last time, they sounded pretty bad when I pulled them out, so I thought oh well, and ordered another pair, only to find that after a week they dried out enough to keep working, and they sound just as good as the new ones. I am very impressed with these earbuds and will probably never buy anything else.
Read more
14 people found this helpful
Helpful
Report abuse
See all reviews