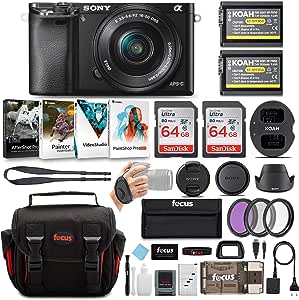 Ignite your creativity with Sony Alpha a6000 interchangeable lens camera. This camera features the world's fastest auto focus which allows you to capture instant shots from fast action to candid. Unlike other bulky DSLRs this camera is the first lightweight DSLR of its kind. You can capture amazing shots and get incredible detail that makes for gorgeous enlargements thanks to its newly developed 24.3 megapixel Exmor APS HD CMOS sensor.

Being compact in size doesn't affect the performance of the Sony Alpha a6000; for starters consider some its functional features. It has two dials on top along with a rear mounted control wheel that allows you to select your preferred shooting mode and camera settings. In addition it also includes seven customizable buttons which can be assigned to any of the 47 functions. Its viewfinder display shows you what will appear in your recordings including the effects of your camera settings so you can fine tune and preview your shots before you take them.

Additional features like Wi-Fi and NFC makes sharing photos with you loved ones easier. The Wi-Fi connectivity allows you to control your camera with your compatible smartphone or tablet. The NFC (Near field communications) technology enables you to tap the camera to an NFC enabled device and you are ready to shoot without wires or hassles.

The Power of Speed

Easy and intuitive controls help you shoot like a pro Despite its small size, the α6000 gives you full DSLR control and immediate access to the functions you need to shoot like a pro. Two dials on top and a rear-mounted control wheel allow quick selection of shooting modes and camera settings. In addition to the Fn button, there’s seven customizable buttons, which can be assigned any of 474 functions.

Make movie magic with Full HD 1920 x 1080 video in cinematic 24p, or capture fast action at incredible 60p and 60i frame-rates.3 Tracking moving subjects is not a problem, made even easier with the α6000’s 179 point AF (auto focus) system –. Selectable in-camera – Blu-ray quality - AVCHD or simple and easier upload to the web - MP4 codecs are available. For serious videographers, uncompressed clean-screen video files to external recording devices is possible via the HDMI connection Capture Full 1920 x 1080 HD uncompressed clean-screen video files with external recording devices via an HDMI connection in 60p and 60i frame rates. Selectable in-camera AVCHD codec frame rates include super-smooth 60p, standard 60i or cinematic 24p, while MP4 codec is also available for smaller files for easier upload to the web.

4.7 out of 5 stars
4.7 out of 5
325 global ratings
How are ratings calculated?
To calculate the overall star rating and percentage breakdown by star, we don’t use a simple average. Instead, our system considers things like how recent a review is and if the reviewer bought the item on Amazon. It also analyzes reviews to verify trustworthiness.

David
5.0 out of 5 stars Awesome package deal!
Reviewed in the United States on August 9, 2017
Color: BlackVerified Purchase
I am not a camera snob so I will not be going into technical stuff, I will leave that for the...eh...well...camera snobs. God bless the snobs because I did read all the reviews I could before I made my purchase. I bought this camera to upgrade from a pocket sized one that I owned but got ruined by a blast from a water pistol. This one cost me 3 times the price of the first camera I got so I wanted to make sure I picked the right one to replace it and this Sony a6000 fit the bill. First, for the price, I was super impressed with all the accessories that came along with it, especially the three batteries and a charger. The kit lens that it comes with is satisfactory. I make a lot of videos as a hobby and although the lens is ok, well, its just that. It's not great but it will get you started for sure. I plan to upgrade to a 35mm lens as soon as I can. Let's face the truth; people are going to either love something or hate it. For someone new in photography, I love this camera and would recommend it to my friends and family. I do not write a lot of reviews but I wanted to do one for this purchase, Very happy buyer.
Read more
46 people found this helpful
Helpful
Report abuse

Jeff
4.0 out of 5 stars Great camera, customer service could be better
Reviewed in the United States on November 16, 2017
Color: BlackVerified Purchase
Minus 1 star for iffy customer service. Camera is EXCELLENT! Super fast focus, amazing low-light shots, and compact size. Software is just okay, not better than Panasonic's intuitive and advanced software. The biggest bummer is the lack of touch screen! However you can always focus on the center of the picture by pressing the center button. Electronic view finder is much better than traditional optical ones, you can actually see in the dark with it! The lens kit is junk, takes mediocre shots comparable to an old digital camera or a smartphone, getting a better lens is recommended. I got the Sigma lens and it's AMAZING! Now I can take professional photos with amateur skills, don't need to spend $2000. Sony offers very good value, compact design, and an excellent overall experience with their software.

Now about the customer service. I ordered this camera kit and a week and a half later, I saw the price drop. I asked for them to honor a price adjustment and they kept directing me to Amazon to deal with that. And then Amazon said no, they are the seller so they have to deal with that. And then I came back to them after sending a screenshot of the chat transcript. They agreed they will make the price adjustment, however they were going to give me 50% of the price change! I couldn't believe it but I took it anyway. Long story short, just buy directly from Amazon if you want better customer service. This bundle kit is only good for the memory card, everything else is junk. I recommend watching the price as they change it up and down all the time as a strategy.

Esso
2.0 out of 5 stars THE CAMERA OVER HEAT REALLY BAD AFTER 15 MINS OF USING. BATTERIES DIE IN 15-20 MINS.
Reviewed in the United States on March 24, 2018
Color: BlackVerified Purchase
I like that it was simple to use, not too many buttons. I like wifi. I dont like that the batteries can't last 30 minutes. They send 3 batteries because it is a battery Killer. No warning just battery low and dead. I hate that after 15 minutes of using A WARNING CAME ON SAYING INTERNAL CAMERA IS OVER HEATING , PLEASE TURN OFF CAMERA FOR COOL DOWN. When i touch the camera it was as if it was in a microwave. That was my last draw. I called Amazon and order a Cannon T6i and send this Sony back. Only to find out after further reseach that this is an ongoing problem with these Sony Cameras.
Read more
16 people found this helpful
Helpful
Report abuse

Larik Sonfar
5.0 out of 5 stars Great camera!
Reviewed in the United States on August 12, 2017
Color: BlackVerified Purchase
Yeah I know its Aug 2017 but after much research I still decided to buy it, this bundle is great, I didn't get the one with the extra lens because I wasn't sure if I rather buy a longer depth of field lens or a smaller one (I think I prefer something for f1.8 next). In this bundle the most important things are the extra two batteries and the charger station that can charge 2 batteries at once, and of course the 2 64 gig memory cards. My bundle like some of the others reviewers here didn't come with the 3 color filters but I'm okay with that. The programs it comes with are cool, I downloaded Corel Paintshop Pro X9 no problem and its a great photo management and editing tool (rivals photoshop in many ways) and its great because it clearly tells you the camera settings you had on while you took the shot. Helps you practice for sure, given that this is a beginners camera. I never owned a DSLR/Mirrorless camera before, just did lots of food photography with my iPhone 7. But this is super easy to use and you'll be set in no time with a few youtube tutorials. I also love it because its super light, I considered the a6300 as well but since its my first dab in high end cameras I didn't think the +$500 price increase was worth it.
Read more

Cobra79
5.0 out of 5 stars Great Camera and Package!
Reviewed in the United States on April 15, 2018
Verified Purchase
I was looking for a new, smaller sized camera for an upcoming cruise and shore excursions. I decided on the Graphite Gray color and love it. It doesn’t show fingerprints (on the camera body) and looks very high end. Like the size and weight and can’t wait to start really using it. So far the pictures I have taken around the house & yard are very sharp and detailed. I decided on this package because of the extras. May not use all of them but the bulk of them I will. Such as the extra batteries, 2 storage cards, lens filters (at least one of them to protect the original lens), etc. The case is a little large for traveling, but I have other cameras & accessories to store in it at home as I have a smaller travel case which this camera fits in perfectly. For the price, you get the camera body, lens and accessories that others charge just for the camera body alone plus the fast shipping made this a no brainer for me.
Read more
11 people found this helpful
Helpful
Report abuse
See all reviews