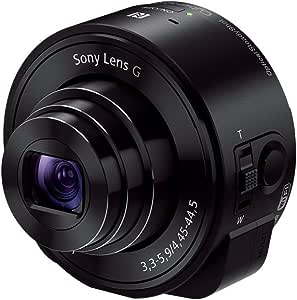 Visit the Sony Store
4.2 out of 5 stars 273 ratings
| 234 answered questions
Available from these sellers.

Introducing the first-ever zoom lens and sensor combo that clips right to your smartphone. Now you can get 10x closer to the action with your phone-and share Pictures instantly online for maximum "likes" It’s never been easier or more convenient to capture and share special moments in the beautiful quality they deserve.

4.2 out of 5 stars
4.2 out of 5
273 global ratings
How are ratings calculated?
To calculate the overall star rating and percentage breakdown by star, we don’t use a simple average. Instead, our system considers things like how recent a review is and if the reviewer bought the item on Amazon. It also analyzes reviews to verify trustworthiness.

Kindle Customer
5.0 out of 5 stars Buy it
Reviewed in the United States on August 11, 2015
*: WhiteStyle: QX 10Configuration: BaseVerified Purchase
It is to my understanding that there are those who have had trouble getting the camera to sync with their phone. I can see how that would happen. Keep in mind that the camera emits it's own wifi signal, and that your phone should be disconnected from any wifi network prior to trying to sync the phone. Also, the camera's password, (you will need that after updates, and for first time use), is under the battery COVER, not under the battery.) I like to include the password in my notes on my phone, and create a text file on my computer so that I won't have to open the camera up, every time I do an update.
As far as the camera, Sony lives up to it's reputation of creating fantastic cameras (Canon, Nikon, and Fuji film beware!). Close ups, landscapes, and low light pictures turn out fantastic! However, zooming, not so great (but, I already have one of the Sony Zoom cameras). The only drawbacks that I have encountered, or have noticed, would be, Sony also living up to it's reputation of making products that are a little fragile. Prior to buying the camera, I would recommend buying a case for it. Keep in mind it will be clunking around in your bag, or car seat, I like to keep my electronics safe. I bought a drawstring bag for one of the smaller DSLR lenses, There are case specifically designed for this camera, but they are a little pricy. Also, I am not sure if the battery life is so low because I bought the camera used, or, the battery life is just a little low. You may want to buy an extra battery. Keep in mind that wifi can be a bit of a battery hog, that combined with taking pictures and videos, can really drain the battery.
In Summary :
Pros :
Fantastic close ups
Fantastic landscape
Fantastic low light
Great for fireworks
Compact
Great design
Cons :
Can be difficult to sync (must follow the instructions)
Fragile, get a case
May need to buy a back up battery and charger

So, if you can follow the instructions, and be a little patient, things will work out well.

Carrie
4.0 out of 5 stars Great hardware, dependent on crappy software
Reviewed in the United States on December 23, 2013
*: WhiteStyle: QX 10Configuration: BaseVerified Purchase
This is a frustrating review to write, as it is impossible to cleanly review the lens camera without also reviewing the Sony PlayMemories Mobile app that the camera runs through via your smart phone. I'll do my best to put as much separation between the 2 as possible.

The QX10: gorgeous little piece of equipment, and takes stunning photos. The look, feel, and performance of the hardware is extraordinary, and I think Sony has really become a strong player in the world of cameras. I love the initiative taken to innovate a product that acknowledges the move to people relying more fully on smart phones for photos, but sometimes wanting to step up the game a bit, without having to lug around a full DSLR camera. Yes, we are doing the dreaded "extra device" thing, but the extra device is small, convenient, powerful, and worthwhile. The BIG set-back with the camera is that Sony somehow (stupidly) chose to force users to make a WIFI connection to the camera, rather than Bluetooth. My understanding is that Android users have a more automatic connection with the wifi setting, but let's acknowledge that there is a huge iPhone user-base here, too. Bluetooth would make for a fast, easy, no-extra-steps connection, and I am endlessly frustrated by the wifi setting.

The App: Dreadful, disfunctional, and not being improved fast enough or well enough. This is a sad story. The promise that is advertised for using the app with the camera is not the reality AT ALL. Just read through the app reviews! It is slow, and your photography experience becomes a nightmare of lagging, freezing, restarting, re-installing, and screaming. It will also drain an iPhone battery in record time. I spent hours on the phone with their support team, and have learned that the app particularly dislikes the iPhone 5, running iOS 7. The app could also clearly have more (obvious) features, such as different scene/shutter settings. The settings menu is very limited.

Camera 360 has integrated a Sony QX10/100 compatibility in their app (3rd party developers are open to integration with the camera). I'm glad to see that someone has at least come on board in that arena, but they offer even less usability functions (not even a tap-to-focus option?), and it has trouble connecting with the hardware. Hoping for more (and better) 3rd party app compatibility in the future.

Overall summary: If you are a casual photographer, and a patient person, the camera is fun, and takes great photos. You cannot rapid-fire shoot, and may have to spend 10 seconds or more trying to get each shot (Nature scene? Cool. Kids and dogs? Good luck!) I remain optimistically hopeful for an improved user experience soon. Meanwhile, I've moved on to the Samsung NX 300.
Read more
12 people found this helpful
Helpful
Comment Report abuse

mkncTop Contributor: Coloring
3.0 out of 5 stars Awkward to handle
Reviewed in the United States on October 21, 2015
*: BlackStyle: QX 10Configuration: BaseVerified Purchase
I bought this because I was looking for something small (fit in a pocket) that I could use while walking outdoors to capture wildlife. I generally carry my phone with me so thought this would be a good way to quickly get pictures of higher quality than my phone could do to share on Facebook and Instagram. I have a small Point and Shoot but was looking for something that would take better quality pics at a distance. In the near and medium distance the shots are fantastic. Crisp and clear and beautiful color. However, in the long distance, which is what I wanted it for, the clarity is just OK. It's higher MP and higher optical zoom that my P&S, but little better quality. It's pretty thick so doesn't fit in my pocket as well as the P&S. But what I disliked the most was the ease of use when attached to the phone. It connected fine and maintains the connection fairly well. But it takes some time to focus and when hand held resulted in some blurry shots. Had the clarity of the shots been there, I would have lived with this physical awkwardness, but without it, it just doesn't suit the purpose for which I intended it.
Read more
One person found this helpful
Helpful
Comment Report abuse
See all reviews

Mark Zou
4.0 out of 5 stars Good overall, but depends on your usage
Reviewed in Canada on June 4, 2015
*: WhiteStyle: QX 10Configuration: BaseVerified Purchase
I've taken this on a couple of triple. Images are great, especially the zoom feature.
Issues: too slow to connect to wifi (even with the latest firmware update). Wifi viewer find sometimes can be very laggy or freezes.
So if you are taking a picture in a hurry, this might not be for you.

Battery life drops quickly when you are doing a lot of zoom. It's expected, so carry some extra batteries.
Read more
One person found this helpful
Report abuse

Page 1 of 1 Start overPage 1 of 1
This shopping feature will continue to load items when the Enter key is pressed. In order to navigate out of this carousel please use your heading shortcut key to navigate to the next or previous heading.
Back
Next
Pages with related products. See and discover other items: point and shoot camera with wifi, smartphone camera, sony camera lenses, digital 10x cameras, lens for sony, sony lens