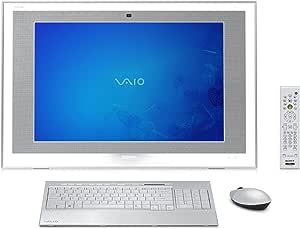 Visit the Sony Store
2.0 out of 5 stars 3 ratings
Currently unavailable.
We don't know when or if this item will be back in stock.

The VAIO LT PC/TV is a TV, PC and DVR – all-in-one. This gorgeous 22” widescreen HDTV features a high-performance VAIO PC cleverly tucked behind its slim side panel. A DVR with massive 640GB hard drive stores up to 60 hours of TV while a super-powerful Intel Core 2 Duo processor provides the power to deliver an astonishing high-definition showpiece for media enthusiasts who appreciate brilliant design, peak performance and cutting-edge technology.

2.0 out of 5 stars
2 out of 5
3 global ratings
How are ratings calculated?
To calculate the overall star rating and percentage breakdown by star, we don’t use a simple average. Instead, our system considers things like how recent a review is and if the reviewer bought the item on Amazon. It also analyzes reviews to verify trustworthiness.
Top reviews

CarolJeanCarmichael
3.0 out of 5 stars Great Computer-TV, With One Major Flaw
Reviewed in the United States on September 1, 2008
I bought the desktop Model LT33E, but most of these comments would apply to any of the 3X Models.

Although the computer may look white in the illustration, the computer actually has a matte silver finish, which fits in well in a home office setting.

The 22-inch wide screen is wonderful for watching widescreen movies, as well as for doing computer work, especially when you want to have 2 page-size windows open at the same time.

Vista and Office 2007--
-----Many people have had negative reactions to the new software environment, but try to keep an open mind until you work with them. I actually like the user interface and find them to be more graphical and user friendly. You may like them too.
-----When Vista was first introduced, many older peripheral devices were not recognized by Vista. In July, 2008, Vista was able to recognize my peripherals, so this problem seems to be abating.
-----This computer has enough resources (speed, memory, RAM) to run Vista without obviously impacting performance.
-----The 3X Models ship with Vista SP1, so you won't have to install it.

Wireless Connectivity--The computer connected immediately to my wireless router (D-Link DIR-655). This desktop computer has the same processor speed as my laptop (Sony SZ370), but the N-level connectivity speed makes the desktop significantly faster than the laptop in surfing the internet. For this feature alone, I would recommend getting one of the new 3X Models of this computer series, rather than buying a discounted older 1X or 2X Model, which would not have the N-level connectivity.

The only problem that I have had with the computer hardware is that the mouse stopped working after a month, but Sony sent me a replacement mouse quickly. In the meantime, I went back to my old keyboard and mouse: the Logitech Wave. These are easier to use and have more functionality than those supplied by Sony, so I am continuing to use the Wave.

The hard drive on the 33E model is specified as 640GB, but it is really 2 drives (C and D) of about 300 GB each. I decided to use the D drive to store my recorded TV programs, so I selected that drive when I initially set up the Media Center.

The Media Center is MicroSoft software that allows you to control the built-in TV as if you have a TIVO, but without the monthly service fee. Unfortunately it does not work consistently on this machine. Sometimes it does not record a scheduled program at all. Sometimes it records part of a scheduled program, and sometimes it does record the entire program. Of the Olympics recordings that I set up, none of them recorded the entire program. I reported this problem to Sony support two months ago, but they have not gotten back to me. Based on comments from Sony technicians, it seems that Sony has been aware of this problem for some time before I reported it. This is the reason that my rating is only 3 stars.

Media center files of TV programs are in .dvr/ms format, which uses a lot of disk space and cannot be edited. Your 300 GB D drive will start to fill up quickly. Although there are several pre-loaded programs that can write to a DVD, there apparently is no software on this computer that can convert the files into a more efficient format, so you may want to download a conversion program. After you convert and edit the files, then you can store them on the D drive or an external hard drive, or write them to DVDs. I will update this review after I learn more about that.

I was extremely disappointed with the fact that the computer had Vista home edition installed on it rather than vista premium. That was shocking.
Amazon was not helpful either. They told me that I needed to got back to the seller, rather than them going back to the seller.
When I did contact the seller I received no response.
So here I am stuck with an item that was sold under false pretenses and I am not getting help or appropriate response from the seller or Amazon.
Read more
One person found this helpful
Helpful
Report abuse
See all reviews