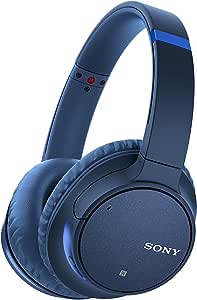 Visit the Sony Store
4.5 out of 5 stars 1,217 ratings
| 102 answered questions
Available at a lower price from other sellers that may not offer free Prime shipping.

4.5 out of 5 stars
4.5 out of 5
1,217 global ratings
How are ratings calculated?
To calculate the overall star rating and percentage breakdown by star, we don’t use a simple average. Instead, our system considers things like how recent a review is and if the reviewer bought the item on Amazon. It also analyzes reviews to verify trustworthiness.

Emilio Vicci
4.0 out of 5 stars Amazing sound but moderate NC
Reviewed in the United States on July 25, 2018
Verified Purchase
Well, finally I have got my order from Prime Day. It came in sealed box, very nice and elegant. Yes it is plastic, but looks very sexy, I have ordered blue color, it is something different than my Beyerdyamics, Pioneers and Sony MDR-1ADAC. Its sound really impressed me, very clean, crisp and with good basses. However Noise Cancelling function is not at top... I have read many complains here regarding this model`s Noise Cancelling function. Lets say so, it is moderate, in 10 point system it will make 6 points, in 5 point system it will make maybe 3. The truth is that it blocks mainly background noise, like groove or other noise. But you will definitely hear child voice, people speaking etc. I can see that Sony put here not the best NC technology they have, and it is logical. They put it on the model which costs 150$ extra (1000xm2). I bought it for 98$ and for that price it is really good.

Pros:
- Looks very sexy and stylish in blue color
- It is light
- It sounds simply AMAZING! I just cant believe that wireless headphones can sound like this!
- It holds 30-35 hours (not tested yet)
- It can be used wired
- It has controls on unit
- It can be controlled from mobile phone (Sony app), which is awesome function! You can edit, modify sound, equalizer, turn on and off NC
- Noise Cancelling not the worst in NC headphones

- It is totally plastic and this may cause broke one day
- It does not have case or bag
- Noise Cancelling is moderate, blocks about 50-60% of sounds
- Sony does not use soft leather, but cheap kind of synthetic one
- It may be expensive for 198$, as there are some interesting models for cheaper price

I guess that is all. At the moment I am burning them and will do that for 7-9 days continuously.
I am sure sounding will dramatically change after that!

Michael A. Cram
5.0 out of 5 stars Very good.
Reviewed in the United States on May 7, 2018
Verified Purchase
Love these head phones. I just tried these out at the gym. They cancel the noise of the machines and I can hear my own music now at a lower volume. As for the bass response: other reviews I have read said it wasn't that good. I disagree. I plated music on Pandora and the bass rattled my brain. I am more than pleased with these.
Read more
147 people found this helpful
Helpful
Comment Report abuse

JC
5.0 out of 5 stars Great headset with noise canceling, works well with Windows and Mac!
Reviewed in the United States on April 26, 2019
Verified Purchase
I needed great headset for work, helping me to focus while life goes on around me. These fit the bill!

They cover my ears and have the noise canceling feature that works really well. Fully charged lasts me several shifts but I usually throw on charger after the 3rd just to be safe.

Easy to set up, I don’t think there’s anything to be relayed for tips there.

Works with Skype and other apps, Windows and Mac.

I highly recommend them!
Read more

Orcatrainer
2.0 out of 5 stars As good (or as bad) as other $40 cheaper headphones.
Reviewed in the United States on July 7, 2019
Verified Purchase
I thought that buying a well known brand & tech will give me something that really worth paying $150 for. Well, in this case I was wrong.

My $35 cheap Bluetooth headset getting old and brittle, I wanted to get a good replacement one and went for the Sony WH-CH700N, which was sold at a "reasonable" price compared to their high end headphones currently on Amazon. Sadly, when I received this headphones I immediately got surprised about how light and "cheap" they felt when handling them. I thought that may be, this was a new way for Sony to build their headphones to make them lightweight, and I thought that anyway they should perform awesomely as expected from a brand like Sony. Man I was wrong...

The sound was okey, without any noticeable good nor deep bass, but just like pretty basic ones. The pairing on my (new 2019) PC motherboard that has integrated Bluetooth went smoothly, but then once paired the sound kept randomly dropping depending on what was playing. If for instance I play a video from YouTube, then all was fine. But playing a game for instance, then the headset decided when it liked or not the sound that was playing, and thus gave me random sound cut/drop, which I never had with my other $35 headset.

I have also tested call with this headset, but it often refused to connect correctly, sometimes I could talk but not hear the other person, or sometimes it was the opposite, and when it did connect alright, the microphone was not filtering any of the other ambient noises, which were then transferred over along my voice when I talked.

The noise canceling seemed to work okey, without any hissing sound once activated, which I like and noticed in some other noise canceling set that they hissed as soon as you turn that function on for some reason. However, because those are very cheaply made and lightweight, the ambient sound WILL find a way to pass through, especially if you use those in a very noisy environment.

GOOD:
- Noise canceling is silent without any hissing sound when activated
- It comes in blue !

NOT SO GOOD:
- Cheaply made and feels like they may break easily
- Sound randomly disconnect/drop when connected on a PC
- Noise canceling not enough to block sound in noisy environment
- PRICEY for what they offer (my $35 headphones performed better than this one)
- User manual could be hard to understand for some, just displaying picture and no explication text

You are welcome to try and judge those by yourself if you like. As for me, I returned mine already back to Amazon, and went with something else for now.
Read more

Page 1 of 1 Start overPage 1 of 1
This shopping feature will continue to load items when the Enter key is pressed. In order to navigate out of this carousel please use your heading shortcut key to navigate to the next or previous heading.
Back
Next
Pages with related products. See and discover other items: sony l camera, Google Headphones, Headphones With Bass, headphones with noise cancelling, Noise Cancelling Headphones, corded microphones