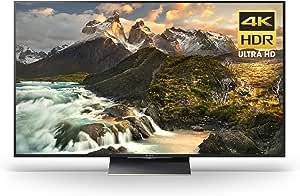 Visit the Sony Store
4.2 out of 5 stars 55 ratings
| 92 answered questions
Currently unavailable.
We don't know when or if this item will be back in stock.

If TVs are measured on picture quality, then the Sony Z-series stands alone. Near perfect black levels combine with the ability to reproduce the brightness and color of the real world, while your favorites get up scaled to near-4K HDR brilliance. It’s a viewing experience that can’t be replicated.

4.2 out of 5 stars
4.2 out of 5
55 global ratings
How are ratings calculated?
To calculate the overall star rating and percentage breakdown by star, we don’t use a simple average. Instead, our system considers things like how recent a review is and if the reviewer bought the item on Amazon. It also analyzes reviews to verify trustworthiness.

Michael Marion
5.0 out of 5 stars Very nice set, still supports 3D
Reviewed in the United States on November 3, 2017
Verified Purchase
I've been very happy with this TV so far in the weeks I've had it. I picked this set as it was one of the few 4K TVs available that still supported 3D. I'm one of the few (apparently) that actually enjoys 3D movies (as long as they're well done) but I also wanted to upgrade to 4K to take advantage of my PS4Pro as well as higher definition 4K movies. While the jump to 4K doesn't seem nearly as different from HD as the initial move to HD was, there are a few moments here and there with a 4K Blu-Ray where I do notice a difference. The screensavers on the 4K Apple TV are also shockingly clear.

The TV itself is very nice, with a great picture. I only rarely bother with the "smart" bits on the TV itself, I tend to use apps on my Apple TV, so I can't really rate those. The only minor gripe I have is the handshaking when changing inputs on my stereo (also a Sony) can take several seconds, especially when switching to the PS4Pro.

Tip for future owners: For some reason 4K input isn't supported on HDMI 1 (I had to google some myself) and you need to make sure to go into the settings to enable the enhanced input for 4K. I also had to enable the same "enhanced" setting on my Sony AVR for it to pass through the 4K signal. Once I got all the settings right, the PS4Pro games (that support it) were in 4K.

G Louis
5.0 out of 5 stars Great (IMO best) 65" 4K LED set, especially for bright rooms and those that care about 3D content.
Reviewed in the United States on January 16, 2018
Verified Purchase
Purchased this TV in Dec 2017, and with a month in, am very satisfied. Decided on this TV over the AE1 and LG OLED because:
1. Set resides in a bright room (20 4' windows/door on 3 walls). Picture/screen is bright, brillant and is not too reflective.
2. Supports 3D with active glasses - very good results. Have an existing libraryof 3D Blu-ray discs. (would have opted for 930 if not for 3D - cost)
3. Full array, X1 Extreme engine with extreme dynamic range gets this LED so close to the current OLED sets - much time comparing A1E & LG.
Other notes:
• Out of the box calibration was very good, with only a few minor adjustments. Instructions (via TV/online) are poor. My thanks to YouTube videos.
• Firmware update for Dolby Vision to come end of Jan 2018. Can't wait to compare HDR10 to DV on this set.
• Used with Oppo 203 4K Blu-ray, Roku Ultra, Marantz AV8801, Outlaw 7701 with Ohm speakers (7.1) and SVS Sub (TV sound not important)
• Wished monitor had more than two 4K HDMI inputs (one ARC), as my preamp only handles 1080p signals.

Update: 1/24/2018
• Sony just released Dolby Vision firmware update and it is NOT "universal" - only works with imbedded streaming services and NOT external devices or current enabled blu-ray players. It appears to be "Sony" Dolby Vision. More than disappointing, it appears (per online posts) the "fix" is the burden of 3rd parties (external device makers). WOW, to say the least. In my case, Oppo has responded and states they were only recently made aware of the issue, and is now working on a solution with no ETA. Hopefully other (Apple TV, Roku) will do the same.
• Due to this issue, I have reduced my rating from 5 stars to 3 stars. Unsure if Sony's issue and/or response is due to misleading marketing, engineering, QA, or a combination of all, it is unacceptible to consumers of their products. This may not be a significant issue for some, but I suggest it is more than just functionality. Time will tell if they will step up and communicate with consumers and agressively help resolve this issue.

Update 2018-09-19: Oppo and Sony upgrades now present Dolby Vision on this set (fantastic), including Roku through Oppo. I now have to give this 5 stars, especially when considering the current pricing, even though a new model is now availble (wo 3D). Kudos to Oppo on delivering the update (and hopefully future support) even though they have since discontinued making these great blu-ray players.

FlyEaglesFly.
5.0 out of 5 stars Very Impressive TV. (Important HDR Dolby info, Read)
Reviewed in the United States on August 5, 2018
Verified Purchase
I’m not going to get into a crazy long review because I’ve only had the TV set up for about 24 hours. I was coming from a Vizio M65-E0, which is a really good TV in its own right, but wanted some better for my home theater. The Vizio M Series has impressive contrast ratio, but sub par local dimming. The 4K HDR Dolby was not bad, just not bright enough for HDR.
This Z9D blows the Vizio’s doors off. I was going to get a Vizio P Series Quantum, but couldn’t pass up the deal on Amazon for this TV.
The 3D function is an added bonus, something I wasn’t really interested in because I hated 3D in the movie theater. 3D on this TV is actually quite impressive. The glasses are very comfortable unlike the movie theater glasses, which is one reason why I did not like it in the theater. If you wear glasses, you are going to need to put your contacts in, the glasses won’t fit over regular glasses.
The one issue I have found so far and it’s not really a game changer for me, but may be for you, the X1 Xtreem processor dosen’t quite have enough power to handle HDR Dolby thru an HDMI port, only 4K HDR10. You can only get HDR Dolby when streaming on Netflix or Amazon Video, maybe other streaming services (haven’t checked yet). I am using my XBox One S as my 4k HDR BluRay player which only does HDR10 anyway and I had no plans to buy a 4K HDR Dolby 4K BluRay player. My home theater 5.2 system is thru regular 1080p BluRay (TV upscales even better than the Vizio) and I have a 2.1 sound bar for the XBox. (4K HDR10). Also only HDMI 2 and 3 are Full HDMI 2.0. HDMI 1 and 4 are only HDMI 1.4.
Sony has released conformation of the Z9F with the X1 Ultimate processor, the successor to this TV with many upgrades, which is now why I know why I got such an amazing deal on this TV. This is my 4th TV in the last 18 months (kept selling and upgrading) but this is the TV I plan to keep for at least a couple years. I have always bought from BestBuy and picked up, but Amazon delivery service was amazing and handled with ease.
I took off one star because of the issue with the X1 Xtreem Chip not being able to handle HDR Dolby thru an HDMI port.

Changed to 5 Stars...
The HDR problem is no longer an issue. It will do HDR Dolby thru an HDMI port (2or3) on this TV, and most Sonys pre-2019, and of course with a HDR Dolby device)) and with an update, the Xbox OneS and X now does HDR Dolby as well.
Read more
6 people found this helpful
Helpful
Comment Report abuse
See all reviews

Rebel
5.0 out of 5 stars Best TV I have ever owned
Reviewed in Canada on October 20, 2019
Verified Purchase
Colour, brightness, deep blacks and amazinf features. Family enjoys the 3D and 4K picture quality! Sad more people did not t have this amazing TV available at $6,999!
Read more
Report abuse

MG
1.0 out of 5 stars So disappointed...
Reviewed in Canada on December 21, 2019
Verified Purchase
Very disappointing, heard such great things but then when we watched our first 3d film there was so much ghosting we couldnt watch! Had to reset tv but now theres faint lines all over the screen so had ro return the TV unfortunately
Read more
Report abuse
See all reviews