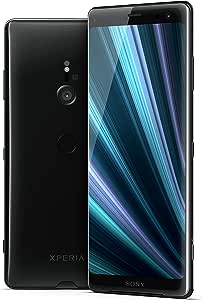 The sleek design of the Xperia XZ3 complements the OLED display, with both the front and back of the device encased in robust Corning Gorilla 3D Glass 5 and an all-new 7000-series aluminum alloy frame, is durable while remaining lightweight.

Xperia Xz3 from Sony is the first smartphone equipped with a qHD+ HDR OLED display. Powered by BRAVIA TV image processing technology, the screen reproduces a Dazzling range of Vivid, natural colors as each OLED pixel lights up Independently to deliver more Accurate detail, depth, and texture in every scene. Displaying a brilliant view at any angle and lifelike scenes with absolute blacks, the device does more than just showcase beautiful pictures - it reveals images and videos that are stunningly realistic. The sleek design of the Xperia Xz3 complements the OLED display, with both the front and back of the device encased in elegant yet Robust corning gorilla 3D glass 5. The frame, made of an all-new 7000-series aluminum alloy, is highly stress- and crack-resistant while remaining lightweight. The 19MP motion Eye main camera includes 960FPS full HD super slow-motion and 4K HDR video recording and has a new streamlined interface, while the front camera has been upgraded to a 13MP F1.9 lens and includes an improved viewfinder for simultaneously using Bokeh and beauty functions in selfie mode. Xperia Xz3 also contains a new one-handed user interface feature, called side sense, to more easily navigate through the smartphone and access key applications. All of this, Plus the latest Android pie operating system pre-installed and a larger 3330Mah battery capacity, makes Xperia Xz3 a finely tuned, high-performance smartphone with a gorgeous large-screen OLED display that can only come from Sony. Connectivity - Bluetooth 5.0 wireless technology, USB Type-C

4.3 out of 5 stars
4.3 out of 5
142 global ratings
How are ratings calculated?
To calculate the overall star rating and percentage breakdown by star, we don’t use a simple average. Instead, our system considers things like how recent a review is and if the reviewer bought the item on Amazon. It also analyzes reviews to verify trustworthiness.

F.H
5.0 out of 5 stars Overall a Great Phone
Reviewed in the United States on October 18, 2018
Verified Purchase
Pros:
1. The screen is ABSOLUTE GORGEOUS, I own Samsung Note 9 and Xs Max, the screen on this Sony is unbeatable. Sony used a newer technology to produce their screen and it is looking fantastic.
2. Doesn't wobble that much on the desk comparing to XZ2.
3. VoLTE is working for T-Mobile (I wan't able to test on other carriers).
4. Comes with Android 9 out of the box.
5. Front facing camera is amazing with much clearer pictures comparing to XZ2, even better than Xs Max.
6. Very sleek design and it has NO NOTCH!!
7. Front facing speakers sounds really good comparing to Note 9.
8. Dedicated camera button instead of a Bixby button.

Cons:
1. Fingerprint scanner is still a bit awkwardly placed.
2. Even though it comes with Android 9, the gesture control like on the new Pixel 3 phones is removed. (I personally don't care since the gesture control is really awkward anyway)
3. Even though it packs a 3300mAh battery, I have less battery percentage after a day of use comparing to Xs Max, but it does hold me through a day. (I have 6 hours of screen on time; I watch YouTube videos, play games, and scroll through social media apps like Facebook and Instagram.)
4. Headphone jack is gone forever for flagship phones from Sony (I use their bluetooth headphones and LDAC is great on playing my FLAC files through bluetooth, so it isn't an issue for me.)

Conclusion:
This is really a great phone from Sony. They improved this phone from XZ2 in all of the aspects. Awesome display, great front facing speakers, and great cameras. The battery life is average to good comparing to other flagships in 2018, but it still is able to hold me through a day, so I have so complaints here. Sony is the only company out there still adding a dedicated camera button, and I have to say, I love it. If you are looking out there for a great phone from Sony, this is a really nice option even if it costs $900 (I pre-ordered it with the Ear Duo bundle, but I would still buy it for $900 for phone only).

Matthew T. Weflen
VINE VOICE
4.0 out of 5 stars A svelte, powerful flagship that should be less expensive
Reviewed in the United States on November 1, 2018
Style: Device onlyColor: BlackVine Customer Review of Free Product( What's this? )
Being a Vine reviewer puts me in a strange position relative to most phone users. I keep getting offered Sony phones, because I've reviewed them in the past. I have now reviewed the XA1, XZ1, XZ2, and XZ2 Premium. So I have a very fine grained perspective when it comes to the XZ3, and will approach this from the aspect of "which Sony phone should you choose?"

First, I suppose, is the question of "Why a Sony Phone?" Well, the answer to my mind is an emphasis on entertainment, with excellent screens and front-facing stereo speakers. Second is camera, with an emphasis on high detail, high-megapixel photos. Third is general build quality - Sony makes beautiful hardware. Now, of course, Apple and Samsung also do these three things pretty well, too. They take differing approaches to camera and A/V quality, but I do think these three companies are within spitting distance of each other.

OK, Now, I'm going to compare the three most recent Sony models - the XZ2, XZ2 Premium, and XZ3. I don't know what Sony execs are smoking over there in Tokyo, but they have decided to release these models within 6 months of each other - from April through October 2018, respectively. So new stock is still available for all three. Why they chose to cannibalize themselves this way is beyond me. I can't imagine an XZ2 buyer being very happy with Sony releasing the XZ3 a bit less than 6 months after they plunked down for their current phone.

All three phones share Sony's new "Ambient Flow" design language. This means they are round, slippery, shiny glass sandwich phones that have reduced bezels compared to their predecessors and a fingerprint sensor in the center of the rear of the phone body. All three share the "Motion Eye" camera sensor that excels at 960fps slow motion filming, 4K HDR video, and capturing bursts of moving still shots while staying in focus. All three utilize the Snapdragon 845 system-on-a-chip with Adreno 630 graphics. So they are all very capable 2018 Android flagships.

So the $200 difference between the XZ2 and XZ3 all comes down to the screen. And I will say, it is an absolutely beautiful screen. The blacks are as close to zero as they eye can see, and the brightness for HDR video is spectacular. It also has the trendy curved side edges that you might like on the Samsung Galaxy line. But otherwise, the XZ3 is functionally identical to the XZ2. It performs the same, gets basically the same 1-day battery life (5-6 hours of screen on time), and takes identical pictures. I would say the price premium is only justified if you really prize the display and watch a lot of high quality video.

The XZ2 Premium is a bit of a different beast. It does perform basically identically on Android tasks, given the same internals. The 6gb of RAM seem to be dedicated to the camera, which is the big differentiator. Adding the second low-light module to the camera does improve low light performance over the XZ2 and XZ3. It’s not night and day (so to speak) but the differences are clearly there upon close inspection. There is more detail and less noise on the XZ2 Premium’s low light photos. Its screen is the highest resolution of the bunch, and it performs well with HDR video – though the XZ3 probably beats it with its deeper native contrast ratio. Now, is this worth a $300 price premium over the XZ2? Personally, I don’t think so. Given the choice of which one to use for free, I’ll take the XZ2 Premium. But if I were doing the math on my own budget, the XZ2 would be extremely tempting.

The XZ3 does also add a few new features, almost all of which are superfluous. “Side Sense” brings up a shortcut menu when you double tap the curved edges of the screen. It is prone to misfires, though, so is more of an annoyance than anything. The phone also recognizes when you pull it out of your pocket and orient it in landscape, and pulls up the camera. But since you still have to tap the screen to initiate the camera, it really offers no benefit over the (wonderful) dedicated shutter button.

The XZ3 is probably the prettiest of the three phones, and is also the lightest. If you’re into comparing phones with your friends, it is likely the one which will get the most “oohs and aahs” next to a Galaxy S9 or iPhone Xs.

A case is an absolute necessity, since the phone is so thin, svelte, and slippery. I almost dropped it several times before nestling it into its excellent Ringke Fusion X case.

People who want to buy a Sony phone have been put in a hard spot by… Sony. It has released three similar flagship phones within 6 months. All three of the phones perform basically identically when it comes to speed. The XZ3 has the best screen. The XZ2 Premium has the best camera. Which of these three areas of performance you value most is how you should make your decision if a Sony phone is in your future. I frankly think the XZ2 will offer the best bang-for-buck for most users. It is also the model that is now best situated to compete with phones like the OnePlus 6T on price. Only those who seriously prioritize display or camera should consider the “step-up” models, which come at a significant price premium.

Please see the comments for a link to higher res images.
Read more

Amazon Customer
4.0 out of 5 stars The Incredible Xperia XZ3
Reviewed in Canada on February 8, 2019
Style: Device onlyColor: BlackVerified Purchase
The best phone Sony has made in my opinion. The display is gorgeous and the menu is easy to navigate. The only annoying feature at the start was the side sense which I found out can be turned off. The sound quality is top notch with the dynamic vibration really making a difference when viewing movies or videos on the phone. Sony has gone the bluetooth route like the other companies and removed the headphone jack but they did give an adapter that goes into the charging slot to allow you to use headphones but this means you wont be able to use headphones if you are charging your phone unless of course you use bluetooth headphones to begin with. The battery is good and gets me through the day which is much better than the samsung I was using before. Overall its a great phone but it is a little expensive compared to other phones.
Read more
2 people found this helpful
Report abuse