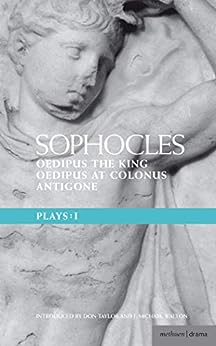 Includes the plays Oedipus the King, Oedipus at Colonus and Antigone, collectively known as the Theban plays. Starting with Oedipus the King and ending with the ultimate sacrifice of Antigone, his daughter the plays follow the trials of a family cursed by the edict of an oracle that "you will kill your father and marry with your mother". From the fourth century BC - when Aristotle took Oedipus the King as his model tragedy, the influence of Sophocles' great plays has been assured. These three great tragedies have a relevance and immediacy as metaphors for some of the most fundamentally held beliefs and values in our culture.This volume contains the Theban plays - widely studied in schools and universities. Translated and with an introduction and notes from Don Taylor - the playwright who directed these plays for BBC TV

Sophocles was an ancient Greek playwright, the writer of Oedipus Rex and Antigone, among other classic works. --This text refers to an out of print or unavailable edition of this title.

Bradley
4.0 out of 5 stars Did what I wanted :P
Reviewed in the United Kingdom 🇬🇧 on January 7, 2014
Verified Purchase
Needed it for AS Theatre Studies and it is was it says, three great plays defintly worth reading/ performing :)
Read more
Report abuse
See all reviews
Report an issue
Does this item contain inappropriate content?
Report
Do you believe that this item violates a copyright?
Report
Does this item contain quality or formatting issues?
Report