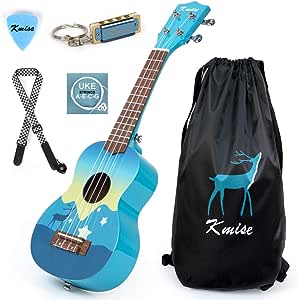 The Best Friends Of Children

Studies have shown that children exposed to music since childhood are more intelligent and outgoing than their peers.

Printed with cute elk and star patterns, Kmise 21-inch soprano ukulele is pretty light and beautiful,which is the best choice for giving your child the first instrumen.

4.1 out of 5 stars
4.1 out of 5
368 global ratings
How are ratings calculated?
To calculate the overall star rating and percentage breakdown by star, we don’t use a simple average. Instead, our system considers things like how recent a review is and if the reviewer bought the item on Amazon. It also analyzes reviews to verify trustworthiness.

Kris
4.0 out of 5 stars It's great (watch the video)! Recommend K-mise; this would be suitable for kids and/or beginners.
Reviewed in the United States on January 15, 2020
Color: BlueVerified Purchase
Overall, quality ukulele for the money. I go into a bit more detail in the video but I recommend it for kids or adults starting. out. Only cons I can think of for a kid's first uke, is that there's no tuner included, and there was no draw-string bag (in the product image), or case included. So, it's a uke you can keep out, hang on your kids wall. Simple cases are inexpensive, and as for the tuner, tons of tuner mobile apps out there, so not a deal breaker. Overall, Kmise made a nice uke!
Read more
35 people found this helpful
Helpful
Comment Report abuse

Chris Russell
4.0 out of 5 stars Kmise Plastic Ukulele: Better Than You'd Guess
Reviewed in the United States on March 31, 2020
Color: BlackVerified Purchase
I ordered this plastic ukulele, as a ukulele reviewer, with this question in mind: "As people are trapped in their homes because of the current world crisis, and may not have much money on hand, can they buy an inexpensive ukulele and learn on it?"

So I ordered the $26 (plus tax) plastic ukulele.

While I haven't yet done my full review, I have some pretty clear thoughts about the ukulele and wanted to share them with you.

Let's start with the price. It's $26. The best starter ukulele (in my opinion) is $55-$60 (I won't name it). In these times, that $30-$35 difference might be too much. So the price is right. I have shipped ukuleles to buyers across the country, and it probably costs Kmise/Amazon $10 to get the ukulele to you. So you're really getting it for $16 (or less!). That's a pretty good deal.

It's made of plastic. Quite a few ukuleles are, some that I love dearly. Others that I don't like so much. The closest example may be the Maccaferri of the 1950s and 1960s. Don't get me wrong...these Kmise models are NOT Maccaferri ukuleles. But they work as an instrument and sound okay. You can certainly start on one of these, and you could certainly buy one to use as a throw-away travel ukulele.

The action (string height) is nice and low. It plays in tune (strings are another matter...I'll get to that). It is shockingly plain (no Kmise logo on the outside or inside of the ukulele). It's light. And it's cheap.

It does have plastic tuners, but they work, and it doesn't seem like there is undue stress on them. There is absolutely a chance of failure of these tuners...they are made of plastic. But keep in mind that Graphtech, a major supplier for guitars and ukuleles, is making plastic planetary tuners that are being used in $500 ukuleles. And also keep in mind that generic metal tuners on eBay would set you back $10. Put another way, metal tuners would like add 1/3 of the price to the cost of the instrument, and the plastic tuners work, and also blend with the instrument. So I'm not opposed. I've played many plastic ukuleles that can't be tuned...this is not one of them.

What does become the greatest issue is the strings. They appear to be like Nylgut strings, but they are not...and they are just plain awful. If you're going to buy one of these, I strongly suggest other strings...my personal preference is Martin M600 strings...and changing the strings will be a bit more of a hassle for beginners as you have to tie them onto a tie bar bridge. Most plastic ukuleles come with a slotted bridge...including the old Maccaferri...but not this model. If this is your first ukulele, buy a string winder as well.

The ukulele also comes with a thin ukulele travel bad (super thin), a set of extra strings, and some plastic picks. I don't understand why companies keep including plastic picks with ukuleles...they just aren't used. People that use picks either use a felt or leather pick, or in the case of some fancy players who don't want to grow nails, a plastic thumb pick (and the thumb pick is rare). So basically, all of the add-ons are nice, but not necessary in any way.

If you're thinking about buying a ukulele, and don't want to put much money into it as you're starting...I think this is a safe way to go. You'll want new strings...and should probably buy two sets (you'll use them eventually), plus a string winder/clipper combination. You can buy a clip on tuner if you would like, but most of us have smart phones and there are a ton of good, free apps that can help you tune your ukulele. All that said, I would encourage these add-ons even for my most recommended beginner ukuleles, increasing their cost as well.

And there are TONS of "getting started" ukulele videos on YouTube...and you CAN learn ukulele without an in-person teacher. You can always take lessons later after you have mastered the basics.

The ukulele is a wonderful, happy, versatile instrument that seems custom-made for the situation we're facing as a country. If you have a little more money you might want to look at other models...but if you want to start playing without much initial cost...this will work, and then you'll have a "beater" to drag around when you move to your next ukulele.

M. Kurtz
5.0 out of 5 stars Nice starter instrument!!
Reviewed in the United States on November 19, 2019
Color: BlueVerified Purchase
Very cute Ukelele. My son wanted to try out playing Ukelele and here’s a video of him playing it after he watched an online Tutorial video. This is the first day he has it, and the strings are supposed to stretch after using it a few days, which can improve the sound.. Very happy with it so far... Looks very nice with the colors/design. Comes with a felt pick and a carry bag.
Read more
10 people found this helpful
Helpful
Comment Report abuse

Jose
5.0 out of 5 stars Great quality for the price!
Reviewed in the United States on November 19, 2019
Color: BlueVerified Purchase
This is my second ukulele from Kmise and like the first one, I am quite amazed at the quality of the materials used and workmanship!!!

My first one was a concert size and this one is a soprano. Like the first one, I was not expecting much in terms of quality since the price was very low compared to the other ones you can find. Again, I was surprised in a very good way!!!

The fretboard is smooth and nicely sanded with the actual frets finished and polished carefully. The paint/artwork is beautifully done too! My daughter was very happy when she got it!

While my first ukulele from Kmise was ready to play out of the box, this one needed a little bit of tuning (which was not a problem at all).

This one came nicely double boxed with not a scratch on the packaging itself. Also came with a basic carrying case which is more than adequate from the looks of it. Bonus is that it came with a free strap and an extra set of strings!!! Also came with a chord chart!!!

Again, the family is very happy with the order! Will surely look into Kmise brands for musical instruments before others!
Read more

richard manning
5.0 out of 5 stars Finger game
Reviewed in Canada on May 26, 2020
Color: BlackVerified Purchase
If your looking for something to stand out this mating season look no further. The fire that comes from my plunking will show any conquest that my finger game is strong. Guaranteed to froth the lions of the masses.
Read more
6 people found this helpful
Report abuse

joseph.rizzuto@alumni.utoronto.ca
5.0 out of 5 stars Great Kids Ukelele
Reviewed in Canada on July 26, 2020
Color: YellowVerified Purchase
Great Ukelele for children and beginners...comes with bag, strap and picks and extra strings....

Used phone app to tune it, very durable plastic and my daughter loved the bright colour and has been playing with this all weekend...

For the price, it’s a must buy for any parent
Read more

Flute Teacher
5.0 out of 5 stars Excellent starter uke
Reviewed in Canada on November 22, 2020
Color: BlueVerified Purchase
I bought this as a birthday gift for my grandson. He loves playing his Mom's ukes. I like the strap so it won't get dropped and damaged by accident. I like that it is made of wood and has a nice tone. Most other painted ukes are plastic. The picture on it matches the hand-painted mural in his bedroom, so win win. Very good instrument for the price. Definitely an instrument, not just a toy.
Read more
Report abuse

coyotee
3.0 out of 5 stars Exactly as described
Reviewed in Canada on March 20, 2020
Color: BlackVerified Purchase
Shipping via Canada Post was a Bad experience.
Postal worker threw item at cement landing at front door, did not handle with Care, did not ring doorbell or knock at door.
Luckily item wasn't broken.
Read more
2 people found this helpful
Report abuse

Joe
3.0 out of 5 stars Good uke, but didn't come with the harmonica
Reviewed in Canada on July 16, 2020
Color: BlueVerified Purchase
Decent uke but it didn't come with the little harmonica in the picture. My daughter was bummed. I guess she wanted to be like Neil Young.
Read more
2 people found this helpful
Report abuse
See all reviews