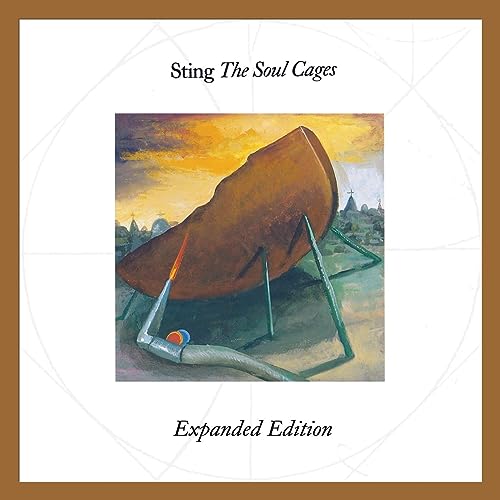 4.7 out of 5 stars
4.7 out of 5
80 global ratings
How are ratings calculated?
To calculate the overall star rating and percentage breakdown by star, we don’t use a simple average. Instead, our system considers things like how recent a review is and if the reviewer bought the item on Amazon. It also analyzes reviews to verify trustworthiness.
Top reviews

C. Owens
3.0 out of 5 stars Sting Fans May Want To Have This
Reviewed in the United States on January 23, 2021
Verified Purchase
The first nine songs are a repeat of the original album, which is a very good album if you don't already own it. The remaining songs are remixes or different versions. I wasn't too taken with the Spanish 𝘞𝘩𝘺 𝘚𝘩𝘰𝘶𝘭𝘥 𝘐 𝘊𝘳𝘺 𝘍𝘰𝘳 𝘠𝘰𝘶 or the Italian 𝘔𝘢𝘥 𝘈𝘣𝘰𝘶𝘵 𝘠𝘰𝘶. I actually put 5 of the "new " 13 songs on my iPod ( well, make that 10 songs - two are the same but edited shorter ) . That's not to say you should pass this by if your a Sting fan. Maybe just buy the songs individually if you get a chance to hear them - it would have been cheaper for me to do that in the end. Nevertheless, I do like supporting artists, musicians so I am not sorry I bought the full digital version. I'm only giving three stars because Sting fans most likely already own The Soul Cages - and that's half the album. The remainder isn't that amazing but interesting.
Read more
Helpful
Report abuse

D. Alvara
5.0 out of 5 stars A Great album
Reviewed in the United States on January 17, 2021
Verified Purchase
A great early album of Sting with many personal songs of Sting father. A rock album with many references to the sea and spiritual matters. A welcomed addition to anyone who loves Sting fans.
Read more
Helpful
Report abuse

JR
5.0 out of 5 stars Amazing Q recording with a 270 degree sound stage.
Reviewed in the United States on June 17, 2019
Verified Purchase
This is one of the top five Q recordings, for me, in a 270 degree sound stage presentation. Sting's material comes to life, like a live recording. Your left and right ears clearly tell you that this NOT just a good stereo session. Thank you.
Read more
One person found this helpful
Helpful
Report abuse

Michael KernerTop Contributor: Hedgehogs
HALL OF FAMEVINE VOICE
4.0 out of 5 stars Soul Bound
Reviewed in the United States on January 23, 2021
When I do look at music from the 90's, there have been some excellent record from British artists. There of course is Elton John, with the driven and intimate Made In England from 1995, the great George Michael with the somber and sweet Older from 1996, and one of the forgotten gems came from Sting himself. Back in the 90's Sting had a new life he was carving with his wife Trudi, but also dealt with the deviating blow of losing his father. That ultimately showed with one of his more forgotten albums, The Soul Cages. The record has been one of his under-appreciated albums of his soulful legacy. But also one of his better albums than his more forgettable records from the 2010's like My Songs and Symphonicities. Now, Sting's most overlooked 90's record is finally getting a re-release of its own, and it sounds good.

The 30th anniversary release of Sting's 1991 record The Soul Cages sounds deep and soulful from the vivid heart as you would expect from Sting. The songs like up much like in the way you would've know if you heard Fragile from Nothing Like The Sun, as a heartbroken son, mourning his parents demise to cancer. The cavalcade of songs though have been more forgotten about with time, unlike songs like Fields Of Gold have shown. But listening to the record, you get a essence of Sting nicely with hearing songs like the mourning-themed Island Of Souls and When The Angels Fall. They each come with a heavy-heart and melodic inner peace in mind. Even his more poppy-driven songs off the record like the Middle Eastern-themed Mad About You, the Grammy-Winning title track and All This Time still ignite a message of realization that stands strong today with issues like the COVID-19 crisis. There are a few new tracks that do add a bit of shine to the dimmed flame on the record like the jazz instrumental, I Miss You Kate which handles well on its own, and Come Down In Time, a cover of Elton John's underrated gem from Tumbleweed Connection, which Sting recorded for the 1991 tribute album to Elton John & Bernie Taupin's music, Two Rooms. Other than remixes of Why Should I Cry For You and Mad About You put into play, a surprise live cover of the Squeeze song Tempted was put on the re-release as well, which was something I did not feel as excited about as the rest of the record.

It surprises me why Sting would put his first expanded re-release of his own catalog to be The Soul Cages. Considered he could've made that a reality with The Dream Of The Blue Turtles and Nothing Like The Sun, because they had more of Sting's standard hits like If You Love Somebody Set Them Free and Be Still My Beating Heart. But The Soul Cages is definitely one record I recommend, especially with dealing with the loss of a loved one. It can be a tough record to listen to at times, but says the right words when they come out. For hard core Sting fans, this is definitely a must buy record, and a album with a good earful for anyone dealing with the death of a loved one at the essence. I recommend you give this album a shot.

Tom Benton
4.0 out of 5 stars Sting breaks out of his cage with soul
Reviewed in the United States on January 13, 2009
I'm a huge, huge Sting fan, but let's face it: most of his lyrics are pretentious, and his records suffer for it via artistic quality if not via listenability. "The Soul Cages" may be the biggest exception. Complaints that it's too gloomy are understandable, if you prefer poppy "Nothing Like the Sun" Sting, and especially if you're into silly "Ten Summoner's Tales" Sting, but for those that recognize he did his best work with the Police (and he did), it's clear that the gloom makes this album. The death of his dear father is the reason for the album, and the ghost of Sting's father haunts almost every one of these nine tracks. For the first time, Sting lets loose and forgets that there's anyone else in the world, dropping his pretentions like a slave dropping his chains; he even sounds like he might weep on the title track. That's good: it's things like that that make this unquestionably Sting's most sincere and unrestrained album. And that makes it his best, too, doesn't it?
Read more
One person found this helpful
Helpful
Report abuse
See all reviews

D. Fenton
4.0 out of 5 stars A good album by a solo Sting.
Reviewed in the United Kingdom on July 22, 2020
Verified Purchase
A very good early Sting solo album, quite touching and haunting, following the loss of his father.
Read more
Report abuse

James Sherriff
5.0 out of 5 stars Timeless music.
Reviewed in the United Kingdom on December 12, 2018
Verified Purchase
First bought a copy of this album in 2013 and it completely resonated with me. I've just bought a copy of this and Ten Summoners tale for my brother (a big Sting/Police fan) for Xmas and I think he'll be happy.
Read more
Report abuse

Big Bear
5.0 out of 5 stars Past life therapy for Geordie rebel
Reviewed in the United Kingdom on September 22, 2015
Verified Purchase
A more difficult set for beginners but bears repeated listening. The song about his father 'Why should I cry for you' is particularly poignant. Love the opener for its compound time and soaring melodies as well as the theme which is carried through to the title track. One of his deeper ouevres
Read more
2 people found this helpful
Report abuse