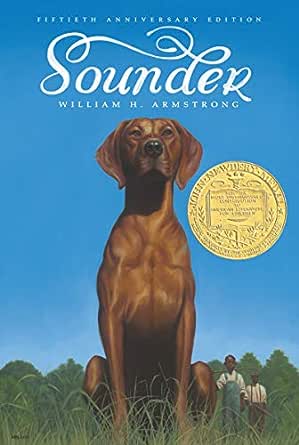 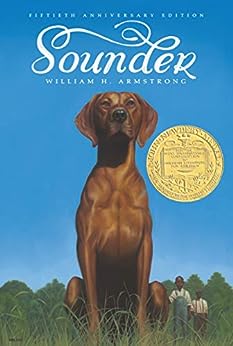 Sounder is no beauty. But as a coon dog, this loyal mongrel with his cavernous bark is unmatched. When the African American sharecropper who has raised Sounder from a pup is hauled off to jail for stealing a hog, his family must suffer their humiliation and crushing loss with no recourse. To make matters worse, in the fracas, Sounder is shot and disappears. The eventual return of a tattered and emaciated Sounder doesn't change the fact that the sharecropper's oldest son is forced to take on man's work to help support the family. His transition to adulthood is paved by the rocks and taunts hurled at him by convicts and guards as he searches for his father. But along this rough road he ultimately finds salvation as well.

William H. Armstrong's Newbery Award-winning novel quickly became a classic as a moving portrayal of resilience and hope in the face of profound human tragedy. Decades later, the bittersweet story still rings true, as strong-spirited individuals continue to battle the evil of prejudice. (Ages 9 to 12) --Emilie Coulter --This text refers to an alternate kindle_edition edition.

A timeless classic, winner of the John Newberry Medal, and the basis of an acclaimed film, Sounder is a novel that tells of the courage and love that bind a black family together despite the extreme prejudice and inhumanity it faces in the Deep South

.
--This text refers to an alternate kindle_edition edition.

"The author writes in details that glow alive."--"New York Book Review"The writing is simple, timeless, and extraordinarily moving. An oustanding book."--"Commonweal --This text refers to an alternate kindle_edition edition.

William H. Armstrong grew up in Lexington, Virginia. He graduated from Hampden-Sydney College and did graduate work at the University of Virginia. He taught ancient history and study techniques at the Kent School for fifty-two years. Author of more than a dozen books for adults and children, he won the John Newbery Medal for Sounder in 1970 and was awarded an honorary Doctor of Letters degree from Hampden-Sydney College in 1986.

This 1970 Newbury Award winner has become a classic. Set in the South, it's a poignant story of a dog, his master and master's family, whose lives are forever changed by one incident. The magnificent trained bass of Avery Brooks is a beautiful compliment to Armstong's prose; words and voice clearly paint images and evoke emotional responses from the listener. Brooks uses a modern pace and Southern accent for the characters. He's talented at conveying personality and sentiment in the few words his characters utter. Blues riffs and Brooks's soulful singing set the tone and enhance the tale. This bittersweet saga, richly told by Brooks, will remain in listeners' hearts and minds long after the final line is heard. J.H.B. (c)AudioFile, Portland, Maine --This text refers to an alternate kindle_edition edition.
Read more

4.6 out of 5 stars
4.6 out of 5
404 global ratings
How are ratings calculated?
To calculate the overall star rating and percentage breakdown by star, we don’t use a simple average. Instead, our system considers things like how recent a review is and if the reviewer bought the item on Amazon. It also analyzes reviews to verify trustworthiness.

fra7299
VINE VOICE
4.0 out of 5 stars Poverty, discrimination, loss of innocence, and perseverance explored in Sounder
Reviewed in the United States on March 25, 2019
Verified Purchase
William H. Armstrong’s Sounder explores the life struggles of an African American family during the turn of the century. The family dog, Sounder, is a beloved member of the family who helps them during troubled times by hunting and being a loyal companion.

Sounder is a quick read that probably could be done in a day’s time or less. Within Armstrong’s novel are themes such as poverty, discrimination and perseverance against life’s struggles. A key point in the story comes when the father of the family, in order to provide for his family, makes a bold decision that ultimately changes the course of the family’s fortunes.

Some critics have noted the lack of names among all of the characters within the novel, and finding exception to it. But, to me, this was neither a distraction nor it detracted or took away from the overall impact of the book.

Also within the plot is definitely a sense of loss of innocence. The young boy, through the many setbacks he experiences, must endure and try to come to some understanding about the world. His mother tries to help him understand the nature of life and its eventual obstacles through her faith and her life experience.

Sounder is definitely a bittersweet experience that stays with the reader.

Allison Garwood
1.0 out of 5 stars 1960's Copyright & White author
Reviewed in the United States on January 6, 2020
Verified Purchase
If you're looking for YA books with Black mc's by Black authors, this is NOT it. It was written by a White dude in the 1960's, and that is VERY evident. My son was offended, and annoyed. I let him tear it up, and throw it away. I wish publishers would review their older books, and re-edit or pull them.
Read more
5 people found this helpful
Helpful
Comment Report abuse

K. Newton
5.0 out of 5 stars Every Kid Should Read This Book
Reviewed in the United States on June 19, 2018
Verified Purchase
This was one of my favorite books as a child. Along with Where The Red Fern Grows. Wanted to make sure my son had a chance to read it since it isn't required reading at school. Beautifully written and pulls at the heart strings.
Read more
5 people found this helpful
Helpful
Comment Report abuse

Kindle Customer
5.0 out of 5 stars A poignant story of an oppressed family and their hunting dog
Reviewed in the United States on February 16, 2018
Verified Purchase
William H. Armstrong's novel is a classic for the ages.
With masterful writing, he tells the story of a poor family as they face injustice and struggle to survive and to overcome.
I recommend this novel to thoughtful, discerning readers of all ages.
Read more
4 people found this helpful
Helpful
Comment Report abuse

Mr. Met
5.0 out of 5 stars Racist legal system's effect on a family
Reviewed in the United States on January 8, 2020
Verified Purchase
Moving account of the destructiveness of overt racism. It is easy for white Americans to overlook the injustice of a racist legal system.
Read more
One person found this helpful
Helpful
Comment Report abuse

TallyCat
3.0 out of 5 stars Simple story
Reviewed in the United Kingdom on January 12, 2020
Verified Purchase
The story of an un-named boy and his family, and their dog Sounder and set in a sharecropping part of Louisiana. The family are really poor, and the father is jailed for stealing food. Sounder is shot and disappears off to mend his wounds, re-appearing several months later. Not an awful lot else happens, and I was left feeling a bit unmoved by the whole thing.
Read more
Report abuse

sg708
5.0 out of 5 stars Five Stars
Reviewed in Canada on January 30, 2018
Verified Purchase
THIS BOOK RECAPS MY YOUNGER YEARS WHEN I FIRST READ IT.
Read more
Report abuse