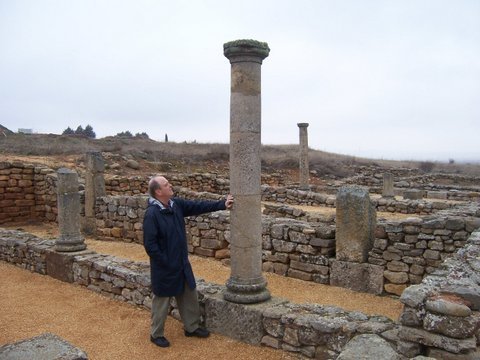 "A wonderfully crafted balance of Roman-era drama and the fierceness of battle." - Kirkus Reviews

"[W]ell researched and engrossing novel . . . .
A well-drawn cast of Roman characters helps to flesh out the occupiers into conflicted and sometimes sympathetic counterweights to Lavena and her comrades, and the author's short Notes appendix does a great job orienting readers not familiar with the time period . . . .
Berger does an excellent job of conveying the feelings of the characters as both oppressed and oppressors and really succeeds in bringing this time period alive.
Recommended." Historical Novel Society Review, Aug. 1, 2015

When G. J. was eight, his mom told him the story of Hannibal crossing the Alps with elephants and a great army. He asked her what happened to Hannibal after that. Mom didn't know, but he was hooked, had to find out, had to write about it.

G. J. spent much of his young life on the road and at sea. often working as a crew member on a tramp steamer. Wherever his travels took him, old walls, canals, even storage holes deep in the ground, made him wonder about how they got there, about the people who built them, how they lived and got along.
The result is this and two other novels-to-be wherein the places, the history, even some of the "Burnt Rocks" characters do and did exist.

When not writing, G. J. tries to roam around the places he writes about, likes to sit and soak up the times back then and bring them to modern life in his stories. G. J. is convinced that for all the changes in last 2000 years, people loved and hated, suffered and rejoiced, destroyed and built the same ways then as they do today.

G. J. lives in San Diego with his favorite grammarian and English Professor. They visit their two sons and grandson as often as the kids will have them.
Start reading South of Burnt Rocks West of the Moon on your Kindle in under a minute.

4.4 out of 5 stars
4.4 out of 5
23 customer ratings
How does Amazon calculate star ratings?
Amazon calculates a product’s star ratings based on a machine learned model instead of a raw data average. The model takes into account factors including the age of a rating, whether the ratings are from verified purchasers, and factors that establish reviewer trustworthiness.
Top Reviews

Tom Stropes
5.0 out of 5 stars One of the best books you can read.
Reviewed in the United States on September 10, 2017
Verified Purchase
A month ago I read a book by G.J. Berger called "Four Nails". If you're A history lover and an animal lover this is the book for you.
I was so impressed with this book I had to purchase his first book "South of burnt Rocks West of the moon". Cooinsadently, I was
Scheduled for a book club meeting with G.J. Berger and his wife as special guests. Both were delightful to talk with and share his
Incite about the second book with Hanable and his elephants crossing the Apps. His approach to this book was a revelation to to me by taking history and making it memerable. Thus I was excited about his first book as well. I can say that it was as good as the second book if not better. It also sets the stage for "Four Nails." I can't wait for number three book!

Candace Conradi
4.0 out of 5 stars A taste of history, a tribute to women
Reviewed in the United States on March 26, 2013
Verified Purchase
GJ Berger has created a beautiful story in his release of "South of Burnt Rocks, West of the Moon." Centered around the Roman era but with an emphasis on the strength and vitality of women, he skillfully places us into antiquity with his deft research, transplanting us into a time of savagery and power conflicts. The hero Lavena is a reminder of how women's courage throughout history has helped them shoulder loss and change with strength and even dignity. The Roman men in the story keep it interesting as they confront their limitations, emotional and egoistic challenges and the sad realities of war. Berger also adds some surprising twists at the story's end. If you are a history buff and love action you will enjoy this book.
Read more
One person found this helpful
Helpful
Comment Report abuse

indieBRAG
5.0 out of 5 stars B.R.A.G. Medallion Honoree
Reviewed in the United States on December 13, 2013
Verified Purchase
We are proud to announce that "South of Burnt Rocks- West of the Moon" by G.J. Berger is a B.R.A.G.Medallion Honoree. This tells a reader that this book is well worth their time and money!
Read more
7 people found this helpful
Helpful
Comment Report abuse

C. Miran
5.0 out of 5 stars Where's the Prequel?
Reviewed in the United States on February 10, 2013
Verified Purchase
Not often do we see a strong female protagonist who is given due credit as a leader, and developed as our hero. While powerful, she is also vulnerable, young, inexperienced and unsure, but with good instincts that allow her to survive; independent yet traditional, holding on to the teachings of her parents, and the surprising custom of her village - that women choose their mates. This is a little-known society that women of all ages will want to explore further. The book leaves the reader wanting to know more about the before and after, begging for the prequel and sequels. I can't wait to read what's next for Lavena. If you're a fan of the "Game of Thrones" series, "Rome" or "Spartacus," you'll love this book.
Read more
4 people found this helpful
Helpful
Comment Report abuse

Colby Marshall
5.0 out of 5 stars When Rich History and Fiction Collide
Reviewed in the United States on December 16, 2012
Verified Purchase
G.J. Berger's masterful prose weaves together a tale of rich historical background and emotional circumstances. Though the characters live in a place and time foreign to us, the author takes us into young Lavena's world and plops us right into the relationships and struggles facing the Celtic people at a time of turmoil. Lavena is a heroine we want to root for as she fights the Roman Empire for her people. As someone who doesn't read many historicals, I must say this is one I thoroughly enjoyed, from the colorful pictures painted to the easy-to-understand language, and through the the characters and story of a female warrior who becomes a force to reckon with.
Read more
One person found this helpful
Helpful
Comment Report abuse

Dan Pollock
5.0 out of 5 stars Gripping evocation of ancient Rome--and what a heroine!
Reviewed in the United States on April 27, 2013
Verified Purchase
Author G.J. Berger conjures up the Roman era with a cliche-free, adrenaline-pumping thrill ride. HIs teenage heroine, Lavena, may remind one Hunger Games with her exploits, but equally impressive is her emotional life, utterly persuasive and compelling. I hope for a sequel... or a prequel.
Read more
4 people found this helpful
Helpful
Comment Report abuse

bstdznr
5.0 out of 5 stars When's the sequel?
Reviewed in the United States on January 28, 2013
Verified Purchase
Historical fiction is not usually a genre I am drawn to, but I read this book on the recommendation of a friend - and I'm glad I did. It started out a bit slow, but by the time I was a third of the way through reading it, I had to force my self to put it down and go to bed. The author obviously has deeply researched the period, and has skillfully brought it to life through the lives of his characters.
Read more
3 people found this helpful
Helpful
Comment Report abuse

Kathleen Kaiser
5.0 out of 5 stars Intriguing Historical Fiction
Reviewed in the United States on December 23, 2012
Verified Purchase
G. J. Berger introduces the reader to the culture and traditions of the young heroine, Lavena's, Iberian people as their world crumbles around them. They are methodically being menaced by the advancing, 2nd century Roman army. Lavena is determined to fulfill a wish of her father's against impossible odds, a universal theme that hooks the reader from the beginning to end of this compelling historical fiction. The author's thorough knowledge of the era and place will widen any reader's perspective of the time, and his spellbinding storytelling will leave them both satisfied and eager for more.
Read more
One person found this helpful
Helpful
Comment Report abuse
See all reviews from the United States

George Perry
5.0 out of 5 stars Brilliant historical novel
Reviewed in the United Kingdom on January 30, 2013
Verified Purchase
I loved this excursion into the Roman era depicting the struggle of a Celtic warrior princess against the Roman invaders - the forces of civilisation (as some of us learned at school) who turned out to be the true barbarians. The story is about the daughter of a tribal chieftain whose village was brutally crushed by the invaders. She struggles to carry out the last wishes of her father to tally the tribes against the butchers in the post Hannibal era. The pace of the storytelling gripped me until the end. My only disappointment was the romance: both her potential lovers died horrible deaths. But that's realism.
Read more
One person found this helpful
Helpful
Sending feedback...
Thank you for your feedback.
Sorry, we failed to record your vote. Please try again
Report abuse

Kindle Customer
5.0 out of 5 stars Brilliant book
Reviewed in the United Kingdom on April 5, 2019
Verified Purchase
This is a wonderful book to read and a great story to get lost in . I recommend you read this along with the authors other book four nails both fantastic
Read more
Helpful
Sending feedback...
Thank you for your feedback.
Sorry, we failed to record your vote. Please try again
Report abuse