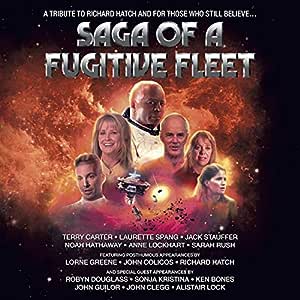 Space Mutiny is a remake of the 1988 B-Movie of the same name. This 4 CD set is housed in a mini box set with a booklet featuring producer's notes, behind the scenes pictures, a star chart and a dedication to Richard Hatch.

Eric Paddon
5.0 out of 5 stars As Close To A "Continuation" As We'll See Of The Original Battlestar Galactica
Reviewed in the United States on January 2, 2021
Verified Purchase
This professionally made audio drama of four stories is for fans of the original "Battlestar Galactica" a labor of love where the grabber is our ability to hear many surviving members of the show come together to take part in the effort in which they are playing the characters we knew and loved......but because of the legal rights issues we can not hear them address each other by name, and that is also why the words "Battlestar Galactica" and the term "Cylon" can never be uttered (which is ironic when you think of how original fans would use term "Galactica In Name Only" for the other entity but this project is Galactica in all *but* name!).

The first story actually takes the B-movie "Space Mutiny" which used a lot of Galactica F/X footage (and was sent up mercilessly on MST3K) and turns its plot into something within the Galactica universe. This episode allows for equal participation of the returning Galactica cast, Terry Carter (Colonel Tigh), Sarah Rush (Rigel), Laurette Spang (Cassiopeia), Anne Lockhart (Sheba), Jack Stauffer (Bojay) and Noah Hathway (Boxey) with Carter getting the big heroic moment. Richard Hatch was supposed to be part of the project but sadly passed away in the pre-production stage. Nonetheless, references are made to the "Commander" who is supposed to be Apollo and it is also said that Commander Adama is currently in a coma (some archival audio of Lorne Greene is used at a couple points, as is archival audio of John Colicos to provide a link to Baltar with one of the new characters in "Space Mutiny"). It obviously helps if you are a Galactica expert and you know right away who is supposed to be who.

The second story "Fail Safe" is a two-character story of Laurette (Cassiopeia) and Sarah (Rush) saving the day. The third story "Quarantine Void" features Noah and Robyn Douglass from "Galactica 1980" and even if you are like me, part of the majority who regards "Galactica 1980" as a horrible nightmare, the story that emerges is actually a very interesting attempt to show how the long-term future of the Fleet can potentially include a path to either the events of Richard Hatch's 1999 trailer project *or* that of "Galactica 1980". The final story "Paradise Void" features Jack (Bojay) and Anne (Sheba) and also two new characters as the ruins of another planet's civilization are explored. The overall end of the storyline arc offers a callback to the final episode of the original series "The Hand Of God".

Fans who have had to content themselves with their own subjective impressions and visions of how things turned out in the universe of original Galactica should approach this series from the standpoint of appreciating that we get to hear so many cast members reunited once again. In the process, hearing them interact offers a reminder of how the chemistry and camaraderie among the actors in the characters they created has long represented the heart of Galactica's enduring appeal with those who first experienced the show as children and learned to keep enjoying it as adults.

Thank you Daniel Earnshaw for your work and effort in making this possible.