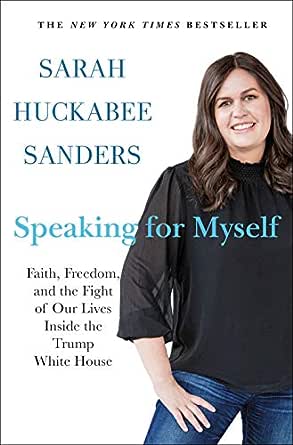 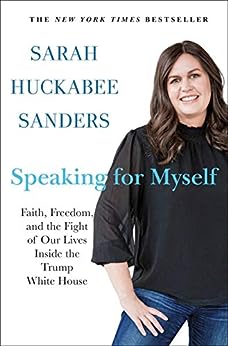 Speaking for Myself: Faith, Freedom, and the Fight of Our Lives Inside the Trump White House Kindle Edition

Sarah Huckabee Sanders served as the White House press secretary from 2017-2019; she was the third woman and first mother to ever hold the position. The daughter of former Arkansas Governor Mike Huckabee, Sanders has worked in leadership roles for U.S senators, governors, and presidential campaigns. Sarah has been recognized in TIME Magazine’s “40 under 40” as one of the best political operatives of her generation. She is a Fox News contributor, advises major companies, and serves on the Fulbright board as an appointee of President Trump. Sarah lives in Little Rock, Arkansas with her husband Bryan, their children Scarlett, Huck, and George, and their golden retriever Traveler. --This text refers to the hardcover edition.

4.8 out of 5 stars
4.8 out of 5
2,899 global ratings
How are ratings calculated?
To calculate the overall star rating and percentage breakdown by star, we don’t use a simple average. Instead, our system considers things like how recent a review is and if the reviewer bought the item on Amazon. It also analyzes reviews to verify trustworthiness.

Vibliophile
TOP 500 REVIEWERVINE VOICE
5.0 out of 5 stars (4.5 stars) - Getting personal "trumps" pandering to the media
Reviewed in the United States on September 8, 2020
Verified Purchase
I was an enthusiastic Huckabee supporter in the 2008 race when Sarah was still single & acting as the national political director for her dad's presidential campaign. I was already impressed by her poise and ability to get things done then; she's gotten even better with age and experience.

MSM reviewers have expressed frustration that Sarah didn't provide more grist for their mills here, so they insist she must be sucking up to protect her future political plans. Clearly they're frustrated that she's providing a look at the human side of the man they've been working overtime to demonize.

Instead, she shares a more personal account of her time in the White House while trying to raise a family, her account of some of the newsmaking moments during her service, and the moments that touched her heart - as well as some of the many hurtful moments inflicted on her by the vituperative Left. The book is a fascinating peek at what it's like to be working with the president, but it's her bio not his, so the focus is hers and told in an engaging way as if you were sitting down and chatting with a friend about her amazing job.

While there were several news stories that I was interested in reading from her personal perspective, I was not familiar with the Christmas story about the soldier from the 3rd Armored Cavalry Regiment who tore the patch off his uniform to give to her, saying "We're in this together". I grew up as a military brat, and it moved me to tears.

Sarah meets the controversy over the Mueller investigation issue head on. It is absurd that so much is made of her - at worst - hyperbolic remark, inaccurate only by the use of the adjective "countless", by the same people who have nothing to say about Comey's exponentially more serious lies, leaks and the partisan weaponization of the FBI. A man who dishonestly misused his position to such an extent that even top Democrats like Pelosi, Schumer, Sanders - & even Maxine Waters - found it necessary to publicly condemn him.

She also shares her perspective on the personal attacks by the so-called comedian at the White House Correspondents' Dinner. I had wondered what was passing thru her mind as she sat there stoically enduring it. I'm even more proud of her for keeping her head up thru it and refusing to let it get to her knowing how much it hurt. And I'm glad to know that many in the press and on the Left apologized for it.

However, as a mom myself, I was particularly interested in the anecdotes where she discusses the extra challenge of being a wife & mother while also being press secretary. There are several humorous ones, but she also shares how her position as a mom affected her view of events.

The book certainly doesn't overstay its welcome at only 12 chapters. It's an easy, yet informative & engaging read, & I enthusiastically recommend it!

AB
5.0 out of 5 stars Excellent read!
Reviewed in the United States on September 8, 2020
Let’s start with this- I give this book 5 stars, but I went into this expecting to give it 2, maybe 3 at best. I didn’t know much about Sarah Huckabee Sanders, except what I was fed by the media, and the sounds bites I saw from her press briefings. I knew she was incredibly bright and driven (you don’t get a job in the White House in your 30s if you are a lazy idiot), but that’s about it.

I enjoyed her book from start to finish. I cried (with her) in the first chapter, laughed with her often, and it truly put a human face and heart behind someone I think the media has tried to villanize. Especially after the correspondents dinner. It shows what a class act Ms. Huckabee Sanders truly is.

I loved hearing about her faith, and her story from growing up in Arkansas to having one of the highest profile jobs in the country. I would recommend this book to anyone- left, right or center (I lean Republican, but would probably be a libertarian if they ever stood a chance to win in Texas), as it was an interesting peek into her time at the White House.

**This was a verified purchase, see screen shot of the cover from my Kindle**
Read more

M. Lee
1.0 out of 5 stars Lies from a compulsive liar
Reviewed in the United States on September 8, 2020
Sarah Sanders lied every time she stepped up to the podium in the White House briefing room. For God's sake don't buy this book it's terrible. Barely 12 Chapters, it hardly qualifies as a book, and is about on the level of a 3rd grader.
Just a ploy to make money from a falsified story of "her life". Take a pass on this one.
Read more
314 people found this helpful
Helpful
Comment Report abuse

Jennifer Moreman
5.0 out of 5 stars Couldn’t put it down
Reviewed in the United States on September 8, 2020
Such a great book! The first chapter pulls you in quickly. Engaging and personal. Excellent!
Read more
215 people found this helpful
Helpful
Comment Report abuse

Mandy
5.0 out of 5 stars A true Class Act!
Reviewed in the United States on September 8, 2020
Verified Purchase
What an Amazing book! Sarah tells you the truth about her time in the White House and her support for our country and the President. Truly a class act!
Read more
185 people found this helpful
Helpful
Comment Report abuse

John F. Honold, IV
5.0 out of 5 stars This is a GREAT READ!!!
Reviewed in the United States on September 8, 2020
Verified Purchase
Could not put it down and read it in a day! Well done Sara Huckabee Sanders...together, we can make a difference [John 1:5]!!!
Read more
167 people found this helpful
Helpful
Comment Report abuse

J. GARZA
1.0 out of 5 stars admittedly lied to the American people
Reviewed in the United States on September 8, 2020
Now she admits to lying to the American people? But please, go ahead buy my book? No thanks.
Read more
161 people found this helpful
Helpful
Comment Report abuse
See all reviews

PJF
5.0 out of 5 stars So inspiring!!
Reviewed in Canada on September 16, 2020
Verified Purchase
Thankyou Sarah for writing this book. What an inspiring story. We need more women like you in this world!!
Read more
One person found this helpful
Report abuse

Josie
5.0 out of 5 stars Fantastic Read!
Reviewed in Canada on September 25, 2020
Verified Purchase
What a fantastic read! I laughed, I cried, and I also found reason for rejoicing throughout this great book. This world would certainly benefit from more people like Sarah.
Read more
Report abuse

Dominic Ahier
5.0 out of 5 stars Great book !
Reviewed in Canada on September 11, 2020
Verified Purchase
You go girl !!! A wonderful firsthand account of the inner workings of the White House.
Read more
One person found this helpful
Report abuse

candis
5.0 out of 5 stars Great Reading
Reviewed in Canada on September 21, 2020
Verified Purchase
Wonderful book!, it made me laugh, cry and feel hopeful about this crazy world. Sarah is one of the best things that happened to President Trump and I am sure he agrees😊
Read more
One person found this helpful
Report abuse