You've subscribed to The Glittering Edge! We will preorder your items within 24 hours of when they become available. When new books are released, we'll charge your default payment method for the lowest price available during the pre-order period.
Update your device or payment method, cancel individual pre-orders or your subscription at
Your Memberships & Subscriptions
There was an error. We were unable to process your subscription due to an error. Please refresh and try again. 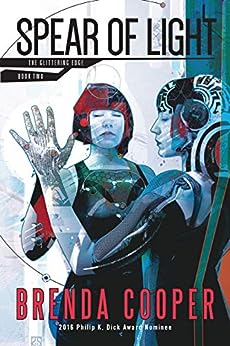 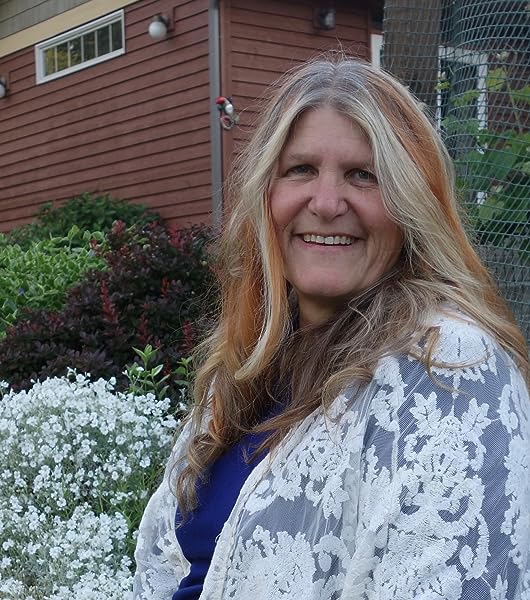 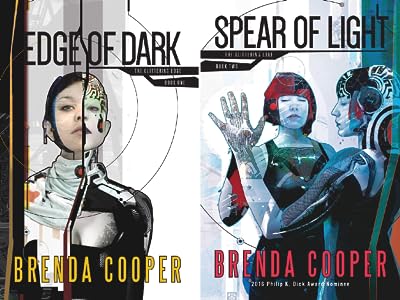 Spear of Light exceeds my already high expectations for a Brenda Cooper novel. The exploration of what makes us human shines through this entertaining read.

Spear of Light wraps a gripping thriller around a cosmic mystery and makes you care deeply about the characters caught up in it all.

-- "James L. Cambias, author of Corsair and A Darkling Sea"

I loved Brenda Cooper's Philip K. Dick Award-nominated novel Edge of Dark, but the follow-up, Spear of Light, is even better. Cooper pits human against post-human and brilliantly reveals the best and worst of her characters. This is a fascinating, well-realized world.

-- "Patrick Swenson, author of The Ultra Thin Man" --This text refers to an alternate kindle_edition edition.

Spear of Light exceeds my already high expectations for a Brenda Cooper novel. The exploration of what makes us human shines through this entertaining read.

Spear of Light wraps a gripping thriller around a cosmic mystery and makes you care deeply about the characters caught up in it all.

-- "James L. Cambias, author of Corsair and A Darkling Sea"

I loved Brenda Cooper's Philip K. Dick Award-nominated novel Edge of Dark, but the follow-up, Spear of Light, is even better. Cooper pits human against post-human and brilliantly reveals the best and worst of her characters. This is a fascinating, well-realized world.

-- "Patrick Swenson, author of The Ultra Thin Man" --This text refers to the audioCD edition.

Brenda Cooper is the author of the Silver Ship series: The Silver Ship and the Sea, Reading the Wind, and Wings of Creation. She has also published many short stories, including a collaboration with Larry Niven, ''Ice and Mirrors,'' in Scatterbrain. She lives in Kirkland, Washington. --This text refers to the mp3_cd edition.
Read more

Gary Grossman
5.0 out of 5 stars Satisfying
Reviewed in the United States on May 24, 2019
Verified Purchase
The two books in this series are excellent pieces of writing, though there are a very few descriptions that are not clear. The overall concept leaves some issues as mysterious as they would actually be. If you're looking for simplisticly full explanations, you probably should go elsewhere.
Read more
One person found this helpful
Helpful
Report abuse

HoadeJ
5.0 out of 5 stars A good wrap up
Reviewed in the United States on March 25, 2017
Verified Purchase
I found this series by accident , and am glad for it. A lot of cool ideas and perspectives are thrown your way without a lot of handholding or definitive answers.
Read more
Helpful
Report abuse

DFMentor
5.0 out of 5 stars A Book to Remember
Reviewed in the United States on August 22, 2016
Verified Purchase
Actually, all four books in the series presented an incredible view of a possible near future that kept my interest.
Read more
Helpful
Report abuse

Clay Kallam
VINE VOICE
2.0 out of 5 stars Cooper misses the mark with "Spear of Light"
Reviewed in the United States on May 17, 2017
Brenda Cooper has had her ups and downs in her eight-novel career, and sadly “Spear of Light” (Pyr, 400 pages, $18) falls short of her best. “Spear of Light” is set in the same time and universe as her three previous novels, which concern humans and transhumans (advanced artificial intelligences (robots) that began as human beings) in a galactic setting.

The Next, as the transhumans are known, are seen as a threat to human beings by many, while at the same time, many humans volunteer for the painful and sometimes fatal process of becoming Next. There’s political intrigue, violence, romance and after four novels, a carefully developed society, but “Spear of Light” (which may be the end of The Glittering Edge series, but may not) just doesn’t click. There’s a major reveal at the end which comes pretty much out of nowhere, solving a puzzle that seemed secondary to the main themes, but otherwise the book simply ends rather than concludes.

All in all, the four novels based in this society are all over the map. For example, one is a thinly disguised version of Eva Peron’s life which has little to do with the themes explored in “The Edge of Dark” and “Spear of Light,” which are a long way from “Diamond Deep,” the first book. My advice: Check “Diamond Deep” out of the library and see how much you like it – and then go from there.
Read more
4 people found this helpful
Helpful
Report abuse

rann
5.0 out of 5 stars What do the Next want?
Reviewed in the United States on July 5, 2017
First, some background. Many humans refer to the Next as soul bots. What they are is a highly evolved community of complex intelligent beings. I actually grew to admire the Next when I read Edge of Dark. They evolved from robots created by humans but were eventually forced out into space because they were feared by their creators. Well, they are back and now have a distinct tactical advantage over humans. But there is a deal, worked out between the Next and representatives of both the planet Lym and the Diamond Deep space station/community. Those representatives, Charlie, the planet saver,and Nona the diplomat will have important roles in Spear of Light.

In Spear of Light, the focus is on the human reaction to the Next’s occupation of the planet Lym. They don’t occupy all of the planet, just carefully chosen territories. Why are they even on Lym? Can they be trusted? Why should the people of Lym just give in to them? What happens to human communities outside of Lym? And what, if anything, can the highly advanced Next do for humans? Questions lead to speculation which leads to opinions and taking sides. Sides that disagree as to how to handle the Next.

Despite having not the faintest clue about what the Next want on Lym, the some residents are determined to fight them. And to fight anyone that does not want to fight the Next. Other residents want to honor the agreement with the Next, just as the Next have also honored the agreement. There is a third, space-based contingent, that just wants to wipe out all soul bots. These human reactions are what makes the story ‘real’ to this human. Ignorance and fear are as motivating as reason and respect.

Putting the broader picture aside, a couple of characters stand out. Yi is one of the four humans-turned-Next that played a role in the current state of affairs between humans and Next. Yi and his family were Next representatives because they were closer to human. In Spear of Light, Yi embraces becoming Next and yearns to evolve further and know more. Yi seems to be an outlier in typical scifi where being forced to become a robot should be terrifying and abhorrent to humans. Yet, here is Yi, eager stretch into his new existence. He does this without forgetting what it means to be human. This depiction of Yi’s transformation is refreshing and hopeful.

Charlie Windar, the ranger has, perhaps, the most substantial human role in Spear of Light. He has always worked to restore the natural world of Lym, keeping the wilds safe from humans. He loves Lym and fears what the Next will do to his planet. Yet, as a broker to the current arrangement, Charlie has done everything he can imagine to save Lym from being completely taken over by the Next. Now he faces his friends and neighbors on Lym who believe Charlie is a betrayer because he gave in to the Next. Charlie’s struggle is the most poignant in Spear of Light and absolutely pulled at my heart. And because I am a romantic at heart, Charlie’s and Nona’s continuing romance, what they do for each other and how they even manage to stay together is an inspiring counterpoint to the struggles around them.

Without spoiling anything, I have to say that I did not see the ending coming at all. While I thought the Next’s motives were suspect, due to the fact that they were not at all willing to talk about them, when I found what they were up to I was surprised. And I do like surprises.

Spear of Light is the awesome conclusion to The Glittering Edge duology. Book 1, Edge of Dark, was such an amazing story that I had a hard time believing it could be matched. Maybe that is why I let 7 months elapse between books, even though I had book two in hand. Spear of Light proved that, as a whole, The Glittering Edge duology is an insightful observation of humankind, filled with hope, hard hitting reality and a sense of humanity’s place in the future universe.
Read more
One person found this helpful
Helpful
Report abuse
See all reviews