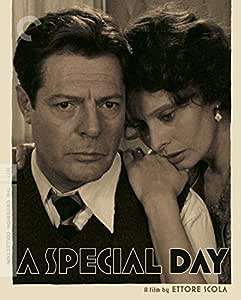 Italian cinema dream team Sophia Loren (Marriage Italian Style) and Marcello Mastroianni (La dolce vita) are cast against glamorous type and deliver two of the finest performances of their careers in this moving, quietly subversive drama from Ettore Scola (The Family). Though it’s set in Rome on the historic day in 1938 when Benito Mussolini and the city first rolled out the red carpet for Adolf Hitler, the film takes place entirely in a working-class apartment building, where an unexpected friendship blossoms between a pair of people who haven’t joined the festivities: a conservative housewife and mother tending to her domestic duties and a liberal radio broadcaster awaiting deportation. Scola paints an exquisite portrait in sepia tones, a story of two individuals helpless in the face of fascism’s rise. BLU-RAY SPECIAL EDITION FEATURES • New, restored 4K digital transfer, supervised by director Ettore Scola, with uncompressed monaural soundtrack • New interviews with Scola and actor Sophia Loren • Two 1977 episodes of The Dick Cavett Show featuring Loren and actor Marcello Mastroianni • Trailer • New English subtitle translation • PLUS: An essay by critic Deborah Young

4.7 out of 5 stars
4.7 out of 5
110 global ratings
How are ratings calculated?
To calculate the overall star rating and percentage breakdown by star, we don’t use a simple average. Instead, our system considers things like how recent a review is and if the reviewer bought the item on Amazon. It also analyzes reviews to verify trustworthiness.
Top reviews

A Wagnerite
5.0 out of 5 stars Brilliant, Understated Masterpiece
Reviewed in the United States on October 1, 2018
Verified Purchase
Sophia Loren and Marcello Mastroianni are radiant in this, probably their finest collaboration. Brilliant acting from both, with a quiet intensity that is breathtaking. Hardly any of the other actors matter much, except the malicious concierge, as we are privileged to witness the "special day" shared by Antonietta and Gabriele, a day which breaks our hearts. The quiet intensity of the drama plays against the vulgarity of Hitler's meeting with Mussolini in Rome. The meeting and the militaristic parade are triumphalistically described by a radio announcer over loudspeakers that surround the encounter of these two solitary, tragic figures. The darkness represented by the loudspeaker bares its destructive power over the bond that develops between them in the devastating conclusion of the film. The seduction scene is handled with tragic intensity by Loren and Mastroianni. It is one of the most remarkable scenes in this great film and evoked a visceral reaction from me. The entire film overwhelmed me as few films have done.

The unique "colour" cinematography enriches the authentic feel of the film. The extras are mighty fine in this Criterion release. Excellent interviews with the director, Sophia Loren and two segments of Dick Cavett with the two actors are all worth seeing. But the real jewel among the extras is the short film made by Sophia Loren's son, Human Voice. It complements the main feature with another powerful performance by the great actress as a solitary victim of a failed relationship. I highly recommend this film and this Criterion edition. It is a unique experience that lingers in the memory and in the heart.

Aunty Glory
5.0 out of 5 stars A love story set in Fascist Italy on the day that Hitler addressed the masses
Reviewed in the United States on March 1, 2018
Verified Purchase
A Special Day takes place in Fascist Italy on the day that Hitler entered the country and gave a speech. He was welcomed by a cheering crowd of giant proportions. Just about everybody came out to see him, waving flags. it was hard not to attend because any dissenter was afraid of being known. They used actual footage which was fascinating to see. Amidst this significant point in history a downtrodden housewife chases her escaped minah bird across the courtyard and knocks on the door of the nearest apartment for access. She meets Marcello Mastroianni, impeccably dressed and charming.
It's really hard to imagine Sophia Loren in such a role but amazingly she carries it off. I was blown away. The relationship that ensues, first timidly and then… Well it's not what you're going to think it is
Read more
8 people found this helpful
Helpful
Comment Report abuse

John M. Curlovich
5.0 out of 5 stars Brillant and heartfelt
Reviewed in the United States on March 10, 2016
Verified Purchase
This film has previously only been available in an absolutely terrible DVD issue--clearly made from an old VHS tape, pan-and-scan not letterboxed, and atrociously dubbed rather than subtitled. This Criterion edition corrects all of that and gives us a pristine print of the film, properly subbed and letterboxed, with the original subtle color scheme restored. A SPECIAL DAY now takes its proper place as one of the crowning glories of Italian cinema. A subtle, perceptive, almost heartbreaking script is matched by Loren and Mastroianni in the finest performances of their careers and razor-sharp direction by Scola. Absolutely not to be missed by any lover of fine film.
Read more
13 people found this helpful
Helpful
Comment Report abuse

History of ideas buff
5.0 out of 5 stars A beautifully rendered, searingly relevant classic
Reviewed in the United States on January 10, 2017
Verified Purchase
Emotionally alive, evocative performances by these superb actors. This beautifully directed film depicts the folly, the stupidity, and of course the evil of fascism, not with sensational footage, but rather by depicting the regime's penetration into the family, onto the work -a -day world, into the life of one innocent man, which, finally, shows us Fascism's impact, in an even more immediate and horrendous way. A classic must see film directed and acted by giants.
Read more
8 people found this helpful
Helpful
Comment Report abuse

victrola
5.0 out of 5 stars A Special Day was a “special” treat!
Reviewed in the United States on August 17, 2020
Verified Purchase
The film is set in WW II Italy. Sophia Lauren plays Antonietta, a dowdy, middle aged woman with five children and a boorish husband, living in a building complex with their mynah bird, Rosamunda.
Once the family has left to attend a parade to greet Hitler’s arrival to meet with Mussolini, Antonietta is left behind to fulfill her duties as the household drudge. Her chance meeting with a gay man living across the courtyard is very interesting.. at times amusing, funny and finally heartbreaking. They form an intimate friendship that makes one feel as if they were a fly on the wall that’s how natural and believable their scenes unfold..you cannot make up Sophia to look dowdy..even though she wears no makeup and the color processing is sepia.. not Sophia in color. I also enjoyed the extras that included two tapings of Marcello and Sophia as guests on Dick Cavett, talking about the film. Worth seeing.
Read more
Helpful
Comment Report abuse

Robert E. Polanco
5.0 out of 5 stars "A SPECIAL DAY": A WONDERFUL MOVIE FOR THOSE WHO LOVE THE VERY BEST IN FOREIGN FILMS.
Reviewed in the United States on August 3, 2020
Verified Purchase
Personally, I was very impressed with the Carlo Ponti-produced movie from 1977 called "A Special Day." With its leading stars like Sophia Loren and Marcello Mastroianni, I was like captivated when I saw the movie many years ago on public television's movie night and I was glad to have the Blu-ray version of "A Special Day" so that I would get to understand more about a period of absolute dread in 1938 Fascist Italy. Aside from the leads, I was surprised to have seen in the movie, the American actor, John Vernon, playing the husband of Sophia Loren's housewife character. Other than those, the movie also portrays Mastroianni's character of "Gabriele," the victim of pure homophobia in a country ruled by a tyrant and others who believed in the credo of "A man is not a man if he is not a husband, father, or soldier." So watch this movie and learn, folks, you will be amazed by the way it shows with power and raw emotion together.
Read more
Helpful
Comment Report abuse

Richard K.
5.0 out of 5 stars Memorable: A Masterwork
Reviewed in the United States on September 5, 2017
Verified Purchase
This is NOT a high brow, elitist foreign film. It is cinema at its finest. Superlative direction, cinematography, acting and film editing. Every film student should watch this film to learn how just one small slice in the life of the protagonists is portrayed and intricately woven to produce a powerful, memorable and evocative experience......and all without CGI, loud sound effects or the like.
Read more
7 people found this helpful
Helpful
Comment Report abuse

garmicham
5.0 out of 5 stars excellent performances by Sofia and Marcello
Reviewed in the United States on May 26, 2016
Verified Purchase
Superb film...excellent performances by Sofia and Marcello. A little gem...it says so much with so little.Amazing how the "media" of that era had so much influence... just as they do now... how the average people were sheep...just as now...and how hidden people are..then...now. The more things change.... la meme chose.
Read more
6 people found this helpful
Helpful
Comment Report abuse
See all reviews

Elisa Scarato
5.0 out of 5 stars Five Stars
Reviewed in the United Kingdom on November 25, 2016
Verified Purchase
a great movie, must see if you like Italian classics and a really good insight Fascist times
Read more
Report abuse

Ron McKercher
5.0 out of 5 stars Criterion Strikes Again
Reviewed in Canada on September 18, 2018
Verified Purchase
Criterion has put out another great dvd ' A Special Day' with Sophia Loren & Marcello Mastroianni. This movie is a drama and not a comedy like their other movies. The acting was superb!
Read more
Report abuse

Konrad
3.0 out of 5 stars Between windows
Reviewed in Canada on February 2, 2018
Verified Purchase
Much in this film is interesting, intelligent, moving. Particularly Sofia Loren gives a very convincing portrait of a taken-for-granted houswife against the backdrop of a dark time of history in Italy. Marcello Mastroianni to me seems overvalued as an actor, at least here.
The tragedy of his fate and in a way theirs does not come across as riveting as it could be and it's not really a case of different cultural sensibilities between Italian and English.
Read more
Report abuse

Page 1 of 1 Start overPage 1 of 1
This shopping feature will continue to load items when the Enter key is pressed. In order to navigate out of this carousel please use your heading shortcut key to navigate to the next or previous heading.
Back
Next
Pages with related products. See and discover other items: criterion movie