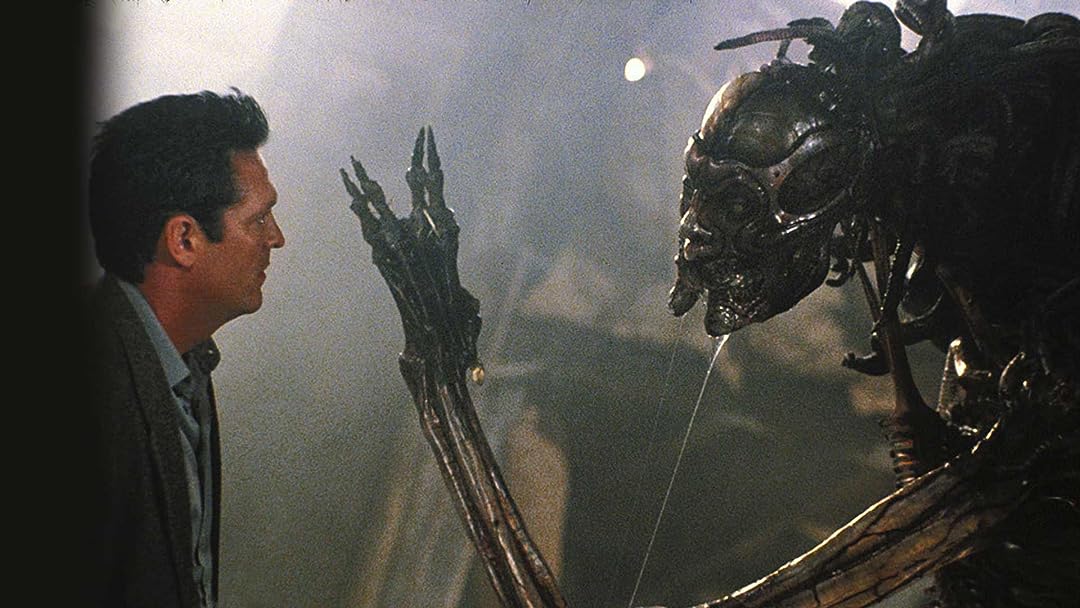 (681)
4.41 h 33 min1998X-RayR
Astronauts returning from the first mission to Mars become infected with an alien form that once back on Earth, reproduces quickly killing anyone who tries to stop them from multiplying.

Kate TomazkiewiczReviewed in the United States on April 18, 2022
4.0 out of 5 stars
Not just another rehash of an old story.
Verified purchase
This movie is true to the first ones original theme of aliens mating with humans. This movie however does tackle the issue of nature vs nurture in a way that has more appeal than just in the movie. Anyone looking for a movie with deeper tropes should enjoy this sequel.

Graeme SmithReviewed in the United States on June 18, 2022
2.0 out of 5 stars
The high point is Richard Belzer as the President
Verified purchase
Species ended with sequel bait in the form of a rat nibbling on Natasha Henstridge's corpse, but the sequel doesn't follow up on that. Instead, it attempts to cross the first movie with The Manchurian Candidate. It's a potentially interesting idea, but the movie squanders it by not doing anything with it, since all the new alien does is rape and kill women, providing an excuse for a lot of sex, gore, and body horror a la David Cronenberg. The gore effects are well-done, but that's not enough to sustain the movie. Also, the scientists are idiots. One doctor sees an astronaut's blood oozing across the floor, and his first instinct is to touch it with his bare hand! The black astronaut--who is a stereotypical Hollywood black guy, meaning he's a total horndog who never stops reminding us that he's black--accompanies Michael Madsen as he hunts for the alien, despite the fact that there's no logical reason for him to do this, as he has no qualifications for it. Apparently, they just needed an excuse to keep the actor in the movie. The climax involves infecting the alien with sickle cell anemia using the black astronaut's blood, which makes no sense since sickle cell is a hereditary disease and is not transmissible. In fact, this entire movie pretty much makes no sense and has no real reason to exist. Skip it.

Banyon G.Reviewed in the United States on August 23, 2018
3.0 out of 5 stars
Aside From The Special Effects, Not Too Much To Write Home About
Verified purchase
While not entirely awful, this sequel could have been so much better. While watching, I was thinking that someone had a good story idea, then the producers said "No, we need more sex! More gore! More violence! And mix all that together!" So what we end up with is more horror than sci-fi, a kind of unsettling mixture of John Carpenter's "The Thing," "Showgirls," and " The Manchurian Candidate. "

However, the dialog is clunky, and stupid at times. Some scenes and situations just make no sense whatsoever, and the characters do things that are inconsistent and at times, incredibly dumb. Other scenes are just so ridiculous and unbelievable that you wonder if you are watching an Ed Wood movie instead of a moderate-budget franchise film.

The blood and gore quotient is really upped from the first film, as are the (violent and explicit) sex scenes. The special effects are well-done, but rely more on shock value and grotesquery to push their point.

On the good side, we discover where the alien race that Sil / Eve represents is from, and what their intended purposes are. And we get to see Madsen and Helgenberger together again, as they had good chemistry in the first film.

There's lots of gore, nudity, sex (always ending in a violent death or two), so if you are squeamish about any of that. proceed with caution with this one. There are two more sequels after this, "Species III" and "Species: The Awakening." I have not seen either, but they both went straight to DVD so my expectations are low.

Tanis Coralee LeonhardiReviewed in the United States on March 14, 2020
3.0 out of 5 stars
Man goes to Mars and returns to Earth infected
Verified purchase
One way tickets to Mars are an excuse for carelessness in treatment of the crew and spacecraft and making sure they can return home if they change their mind about staying at any point. I hope things don’t go the way of this movie with our travels to Mars. Humankind’s first manned mission to Mars captained by Patrick Ross (a U.S.A. senator’s son and a former Yale football star) is a success and he becomes the first man to set foot (really shoe) on Mars. Only things don’t go according to plan and he is infected on the trip and starts infecting other humans upon returning to Earth as he is sexually promiscuous and the infection spreads sexually. He is also told he is going to be president of the United States one day, he is labeled as one with potential. He decides he is better than all other humans and wants to mate with an alien named Eve. Perhaps this movie is a sign of things to come, good thing we have the novel coronavirus to practice our response to virus outbreaks now. Perhaps you will be a victim to the host of a virus from Mars, possible in our lifetime. I like the ship’s name “Excursion”, time to excurd to Mars and bring back a virus! Natasha Henstridge, who portrays Eve, is gorgeous.
One person found this helpful

joel wingReviewed in the United States on March 17, 2021
2.0 out of 5 stars
Ridiculous story but the alien looks good
Verified purchase
Species was a hit so they had to make a sequel which was a flop. Three of the main characters returned, Natasha Henstridge as the alien, Michael Madsen as Press a spcial operative and Marg Helgenberger as Dr. Baker. This time scientists try to use the alien for good to stop to counter a new alien found on Mars.

The story is immediately ridiculous based upon what the Martian is doing which becomes an excuse to show a bunch of naked women and how the government responds. On the other hand the martian looks good but the movie is a mess.
2 people found this helpful

Amazon CustomerReviewed in the United States on July 23, 2019
5.0 out of 5 stars
My favorite species film
Verified purchase
Of the three films in the Species franchise this is my favorite. Then 1. The third one is very skippable.

Three astronauts go to Mars and take samples of the soil. What they don't realize is that they've inadvertently brought onto the ship alien DNA. While they are prepping to leave that alien DNA attacks them and they are unconscious for 9 minutes. During those 9 minutes two of the astronauts are infected with alien DNA. The third carries sickle trait and that becomes their weapon against the alien species.

JP FishReviewed in the United States on January 4, 2018
5.0 out of 5 stars
R. H. Geiger's sex starved alien is back for another try at world domination, and a lot of whoopy.
Verified purchase
A great sequel to a semi-classic. This Earth bound alien story line is the ultimate morality play about the consequences of elicit unbridled sex. Then there was the ever infectious Frankenstein Fever that always hits the short sighted researchers.Men obsessed with creating life, sigh. Who needs all those gadgets for that?(Never mind,. I'll behave now) And let's not forget about those unwanted pregnancies. It was a time in film making when the "yuck factor" still ruled over general logic in story telling. Although not held strictly to Sci Fi / Horror films, the gore was still escalating in this film series while the budgets were dropping. But, hey! If you liked the first one, you'll love this one!
2 people found this helpful

bobbie13Reviewed in the United States on August 7, 2018
3.0 out of 5 stars
Fast Forward about 20 Minutes of Movie
Verified purchase
Lots of nudity and sensuality that shows up 22 times in the movie that wasn't necessary to fulfill its storyline. If you take out the junk in this movie, you would have yourself a good movie. I wouldn't had purchased this movie if I had known that this movie needed so much cleaning up for human eyes.
Movie makers such as this one, thought they could make a movie like this one but they didn't stop to think whether they should. Has this Country (USA) lost their morals? That's why my family stopped watching regular tv and cable tv because of all the junk they show in commercials (after 2007). We ONLY watch movies on Clearplay DVD player that filters out junk (like women in their underwear, nudity, sex scenes, etc).
One person found this helpful
See all reviews
Back to top
Get to Know Us
Make Money with Us
Amazon Payment Products
Let Us Help You
EnglishChoose a language for shopping. United StatesChoose a country/region for shopping.
© 1996-2022, Amazon.com, Inc. or its affiliates