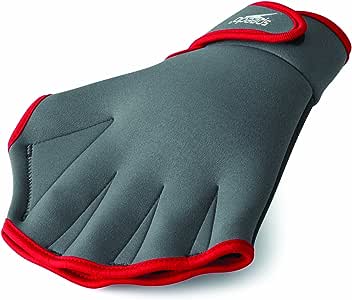 The Science of Water

If you're a fitness enthusiast searching for a fresh new challenge, a pro athlete looking for a competitive edge or you struggle with simple daily movements—the water offers more.

A great addition to your vertical aquatic training

These gloves feature flexible webbing for adding resistance in the water. Soft, comfortable and easy to adjust.

Rethink the pool - it’s an all-in-one workout center that can help you reach your fitness goals. Discover the power of water!

A Neoprene glove with webbed fingers and a rubber palm with adjustable wrist closure and ultra flexible webbing for use during water resistance training. Helps create smoother movement in the water for a more comfortable upper body workout. They also add propulsion through the water. Ideal for water aerobics and pool workouts.

Speedo's Aquatic Fitness Gloves provide increased resistance in water for greater toning and strengthening of muscles and cardiovascular exercise for your heart and lungs. Made from neoprene, the gloves feature webbed fingers, a rubber palm, and adjustable wrist closure. You'll get smoother movement in water for a more comfortable upper body workout and increased propulsion through the water.

About Speedo
In 1914, Speedo was founded in Australia by Alexander MacRae, a 22-year-old Scottish immigrant who arrived in the country in 1910. The company began when MacRae Hosiery manufacturers, established by Alexander in 1914, extended the manufacture of underwear to swimwear and became MacRae Knitting Mills. A naming competition was held by the staff in 1928 and won by a Captain Parsonson, who coined the slogan, "Speed on in your Speedos." In 1929, the first swimsuits were in production and it didnt take long for Speedo to successfully establish itself. World War II caused the brand turn over 90% of its manufacturing to war production, providing the armed services with vital equipment such as mosquito nets. After the war, Speedo opened a new factory and was able to re-establish itself, due to increased demand for swimsuits. In 1951, Speedo Knitting Mills (Holdings) Ltd, was incorporated and became a publicly traded company on the Sydney Stock exchange.

Speedo hit the international stage in earnest, at the 1956 Melbourne Olympic Games, and a few years later the brand grew on a more global scale. Export sales to the USA began and an international division was set up to monitor trade in New Zealand, Japan and South Africa. The expansion of the brand continued, and in 1976, Speedo was appointed as the official swimwear for the 1976 Montreal Olympics, where 52 out of 54 countries wore their swimsuits.