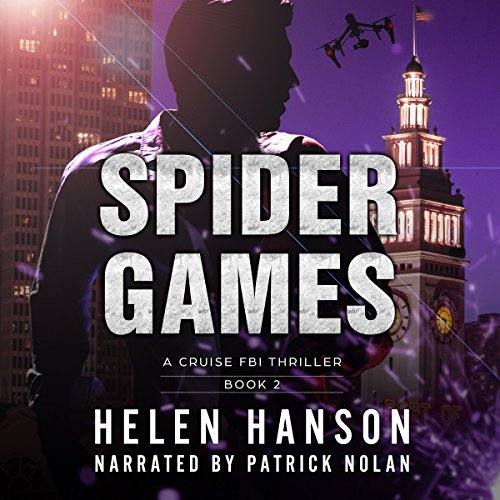 Instead living that better life, a runaway ends up a floater in the river.

Hers won't be the last death.

The ones left behind are still slaves.

It's Claudia's job to figure out the dead woman's name. But what's her connection to a bombing in San Francisco?

How will the dead woman's sister escape now that she's alone?

Baxter's work with drones is game-changing. He's offered an amazing job in robotics. Then a man threatens to reveal Baxter's secret past.

When their own city is rocked by the bomber, will the wrong person get accused?

Can Baxter and Claudia stop the maniac before another target is destroyed?

An intelligent thriller to keep you listening because it's a twisty tale until the explosive end.

Get it now and hear the thrills unfold.

Nicole
4.0 out of 5 stars High-Tech Drones and a Really Good Mystery!
Reviewed in the United States on August 14, 2016
Verified Purchase
I really enjoyed the story line in this book. Helen’s high tech angle of using drones was fascinating. Especially, now, at this time when we are learning more and more about drones and finding out what they are capable of doing. A real plus! I fell in love with the characters; Baxter, a real computer geek with a great love for research on drones; Trudy the dog – would love to have him in my house; Konos, Baxter’s robot – so so smart – wouldn’t mind having one of him either! Claudia, an FBI agent and Baxter are a great fit together and I’m looking forward to more books with these characters. They really get to you!! No profanity – so thankful for that – it involved a great mystery and lots of high tech action. Drones and robots are so fascinating. Of course, they are only as smart as their programmer but still.... Spider Games is the sequel to Ocean of Fear and it, too, was a great story. I loved the continuation of these same characters – can’t get enough of them. Let’s hope we won’t have to wait too long for more of the same.... I would have liked to give this book a five star rating, but because of sentence/description/tense problems, I have to give it a four. Hate doing that when I liked the book so much. The publisher provided a complimentary copy of this book in exchange for an HONEST review.
Read more
Helpful
Report abuse

Rosy Reader
5.0 out of 5 stars Relationship and Career Challenges
Reviewed in the United States on August 13, 2016
Verified Purchase
If you haven't read Ocean of Fear or the Masters CIA series, you might consider doing so. I think it will enhance your understanding of the main characters' backstory but appreciate the appearance of some cross-over guest stars.

This is a Techno-Thriller with a combination of Crime Fiction and Law Enforcement Procedural plus a dash of Romance.

A series of events threaten the fledgling relationship between Baxter Cruise and Claudia Seagal. Will they be strong enough to weather the storm or will they be torn apart forever?

I loved how Ms. Hanson interwove relationship issues alongside career challenges. There was just enough technical information to understand what was going on without putting me to sleep... as a matter of fact the last few chapters definitely had me turning pages way past when I should have been asleep.

Warning: This is for Mature Audiences due to Violence and Adult Situations.
Read more
2 people found this helpful
Helpful
Report abuse

Shari Damaso
4.0 out of 5 stars Okay, but liked Book 1 better
Reviewed in the United States on February 3, 2017
Verified Purchase
I thoroughly enjoyed the first Cruise FBI Thriller book and looked forward to reading more. This book was still good, but did not pull me in as deeply. The characters continue to grow and change, but something seems out of balance in the dynamics of the relationships; do they trust each other or not? Are they helping each other or protecting themselves? I wanted them to move one direction or the other and not waffle in indecision with each new piece of the case. I am writing this review a few weeks after reading the book so some details are unclear, but I don't recall the two storylines coming together in a satisfying way. Each story line had enough detail that I expected them to merge at some point into a single case to "complete" the story. But I don't think that happened. (But perhaps I am remembering incorrectly.) I will probably buy the next book in this series (when it's available) to see what direction the author takes the characters. I liked them enough to give them another chance.
Read more
Helpful
Report abuse

Rose Arbor
VINE VOICE
5.0 out of 5 stars Loved the Book!
Reviewed in the United States on August 13, 2016
Verified Purchase
This book was awesome! I loved it.

The book starts out with two sisters trying to escape from a forced labor camp. Then it switches to a man, Baxter Cruise, who is quite brilliant with drones, and his girlfriend, Claudia Seagal, an FBI agent. If you haven't read the previous book there will be some confusion here for a couple of chapters as they make reference to things you don't know. Ignore that and just focus on the present facts because this story will take off......literally. This book is so good, so exciting, and so suspenseful that it will knock your socks off. You will be filled with the urge to run to your computer and order more books by this author. This book has human trafficking, drones, a touch of romance, multiple evil people, bodies, drones, good guys, desperate people, drones, and an ending that will make you sweat blood. What more could you want? A dog? It's got that, too! Buy the book. Read the book. Then go ahead, run to the computer and buy more books. That's what I'm doing.
Read more
Helpful
Report abuse

AnnGuiles
5.0 out of 5 stars Hero utilizes drones & robots as both sidekicks and characters to solve mysteries in this adventure.
Reviewed in the United States on September 22, 2016
Verified Purchase
This was a fun book, lot's about drones, action, tension a bit of romance but just a very interesting character in Baxter. However, I had to go back and re-read the previous book in the series because of the many references to Syd. I have read 5 of these books, and find the writing enjoyable, suspenseful and enjoy the development of the character. Baxter becomes more likeable with each book. I also like the Dog and the Robot who guards his home. The robot has it's own quirky personality. I intend to put aside time to read these back to back because I think I would enjoy them alot more having everything fresh in my mind.

I hope the author continues writing this series. I believe the whole topic of drones & robots can be developed in many different directions

Thank you for some Enjoyable & interesting ways to learn about a new field while being thoroughly entertained.
Read more
Helpful
Report abuse
See all reviews

Mr. West
5.0 out of 5 stars Helen Hanson does not disappoint.
Reviewed in the United Kingdom on August 11, 2016
Verified Purchase
This book was given to in return for an honest review.
This is the fifth book that i have read by this writer and to date I have not been disappointed. You will find yourself immersed in this book right from the first few chapters. Sub plots will introduce you to character from the writer`s previous books and intertwine with the storyline. If you havent yet read any books by Helen Hanson I would strongly advise you to do so.
Read more
One person found this helpful
Report abuse

rodgeralexander
4.0 out of 5 stars An enjoyable read
Reviewed in the United Kingdom on August 11, 2016
Verified Purchase
A follow up to Ocean of Fear and its in with the really excellent Master trilogy
Read more
Report abuse

Mandy Walkden-Brown
5.0 out of 5 stars A thinking person's thriller that doesn't disappoint.
Reviewed in Australia on October 21, 2016
Verified Purchase
A job opportunity of a lifetime, a new relationship, all is right with Baxter Cruse's world. Until it's not.

High tech drones, a terrorist group and a murdered girl. The plot lines are deftly interwoven to produce a truly riveting read.

The characters are real, unsettlingly so in a few instances, the story fast-paced and intelligent. Twists and startling surprise at every turn, tension and suspense abounds. A thoroughly enthralling tale that I cannot recommend highly enough.