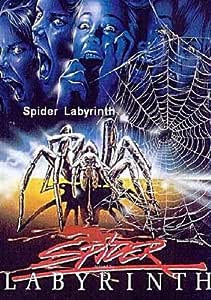 1988-Color-English Dubbed-Widescreen-Warning-not intended for viewers under 18 years-contains scenes of violence and sexual situations. Handsome Professor Alan Whitmore is assigned by his university to go to Budapest to seek out Professor Roth who has been investigating an ancient religion. Once there, he is met by Professor Roths' beautiful assistant, Genevieve Weiss. But Professor Whitmore soon finds himself at the center of mysterious cult involving secrets, murder, and a monstrous mind controlling spider god . Will the professor solve this weird puzzle, or will he too be caught in the web of the Spider Labyrinth?

3.2 out of 5 stars
3.2 out of 5
16 customer ratings
How does Amazon calculate star ratings?
Amazon calculates a product’s star ratings based on a machine learned model instead of a raw data average. The model takes into account factors including the age of a rating, whether the ratings are from verified purchasers, and factors that establish reviewer trustworthiness.

John's Horror Corner
3.0 out of 5 stars A "watchable" Italian B-movie about a cult and their demonic spider god. The finale is AWESOME!
Reviewed in the United States on October 2, 2018
Verified Purchase
It’s not the worst Italian B-movie I’ve seen (not by a long shot), and it was worth it just for the zany monster at the end!

Professor (of Oriental languages) Alan Whitmore is summoned to go to Budapest to investigate the disappearance of Professor Roth and his Intextus project. In Hungary Alan finds notes about a labyrinth, a group called the weavers, and discovers the existence of “living Gods” being worshipped by a sect.

At this point I feel it’s only fair to offer a DISCLAIMER: 1) There basically is no “Labyrinth,” but instead some catacombs. 2) Almost all of the spiders in this movie suck… except one very special one at the end.

The plot is tossed haphazardly in our lap, characters seem to randomly disappear mid-scene without explanation, windows magically fix themselves, Roth ends up hanged and festooned in cobwebs, and Alan is bombarded by dire warnings that he should return home.

I’m sure it will come as no surprise that basically nothing interesting happens in the first hour. Yes, some people die. But they are lackluster death scenes by some random (perhaps mutant) cultist and the special effects… well… aren’t so special. We have some unnecessary stop-motion spider work, some weak stab wounds and a sharp-toothed crazy cultist lady.

But after the 60-minute mark (i.e., the last 20 minutes) things get interesting! The catacombs sets are decent (maybe the most ambitious aspect of the film), complete with corpses, cars and cobwebs. We enjoy a spit loogie-noose strangulation (yup, you read that right), an enthusiastic sex scene, yet more action/fight scenes with the crazy-toothed cultist lady, and then there’s the living god. Oh, this is a pleasure! A green-skinned evil demon baby gorily transforms, sprouting a long prehensile neck and spider legs from its side to create a stop-motion/puppeteered monstrosity! This was really cool and more than worth the price of admission!

I’m not surprised I could only find an old gritty version of this film. But it’s too bad since that final effects scene was just glorious (in that bad 80s vein). Honestly, as a big fan of B-movies, this was more enjoyable than I expected.

Davey Jonestown
3.0 out of 5 stars Imagine Fulci on Lovecraft, that's pretty much it...
Reviewed in the United States on October 12, 2014
Verified Purchase
First of all let me start by saying this DVD edition might not be the best, in fact is really far from it (poor artwork, poor video quality, absolutely no menu features) but let's face it.. Is the only edition there is as I know, and it gives it kinda a bootleg vhs grainy look, that makes it more nostalgic. As for the film its pretty awesome if you love Fulci-like movies (although even Fulci films were not even as half as bad it this forgotten gem). It has an unique charm to it, see for yourselves. There is one particular kill scene where our victim gets trapped in a labyrinth of white sheets which I though was incredibly done and sinister, has a surreal vibe akin to The Beyond (again from mastermind Fulci). Don't expect groundbreaking FX but for my money I thought they were nicely done. As many have noted this film is high on Lovecraftian themes and the messed up finale derrives pretty much on these themes. Recurring Lovecraft tones are frequently used such as an eerie Gothic vibe (don't expect humor on this one folks) and the cult itself was very lovecraftian in nature. Good movie if you can pass some of its godawful flaws; rewarding and grim, Lovecraftian Supernatural Giallo, swell.
Read more
5 people found this helpful
Helpful
Comment Report abuse

Robert Daly
3.0 out of 5 stars CHEAP BOOTLEG of a rad movie
Reviewed in the United States on September 24, 2017
Verified Purchase
Looks like somebody made this copy on a home computer with a DVD burner. Label and cover art might as well have been pulled from google images, movie quality is equal to the copy floating around on YouTube. No menu features, image and sound quality are bad. Aside from that I bought it because this movie is rad. The movie is 4 stars for sure especially for fans of Italian horror. The DVD is a badly executed bootleg, but if you want to own a physical copy here it is!
Read more
3 people found this helpful
Helpful
Comment Report abuse

Mike Watson
2.0 out of 5 stars Dvdr
Reviewed in the United States on May 11, 2018
Verified Purchase
Dvdr and probably a bootleg
Read more
One person found this helpful
Helpful
Comment Report abuse

Penda, Scourge of the Christians
4.0 out of 5 stars Could have been better
Reviewed in the United States on May 22, 2014
Verified Purchase
I am sorry, but it seems that every Italian film I own is dubbed poorly. It gets on my nerves. This movie is no exception. The transfer looks like it's from an early 80's VHS and the color isn't quite right. The acting is wooden, but the secretary and the sex scenes with her are hot. The plot is predictable, yet the movie does have some scares and it does show respect for the great HPL. So, I gave it four stars for sex and glory.
Read more
One person found this helpful
Helpful
Comment Report abuse

Jay
1.0 out of 5 stars Bad quality release
Reviewed in the United States on May 15, 2013
Verified Purchase
Unofficial DVD release. Movie itself is ok, but totally flawed by this horrible print (smudged and grainy picture and muffled sound quality is of an old VHS tape). DVDs of this quality shouldn't even exist. You have been warned.
Read more
6 people found this helpful
Helpful
Comment Report abuse