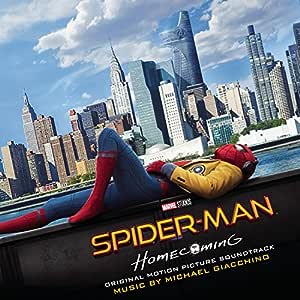 About the Movie
A young Peter Parker/Spider-Man, who made his sensational debut in Captain America: Civil War, begins to navigate his newfound identity as the web-slinging superhero in Spider-Man: Homecoming. Thrilled by his experience with the Avengers, Peter returns home, where he lives with his Aunt May, under the watchful eye of his new mentor Tony Stark. Peter tries to fall back into his normal daily routine - distracted by thoughts of proving himself to be more than just your friendly neighborhood Spider-Man - but when the Vulture emerges as a new villain, everything that Peter holds most important will be threatened. Spider-Man: Homecoming stars newcomer Tom Holland as Peter Parker/Spider-Man along with Academy Award® nominees Robert Downey, Jr. as Iron Man, Michael Keaton as the Vulture and Oscar® winner Marisa Tomei as Aunt May. The movie opens in theaters nationwide on July 7.

About the Composer
Academy Award®-winning composer Michael Giacchino grew up fascinated with both movies and music and has gone on to a successful career writing scores for acclaimed films, television series and video games. A graduate of the Juilliard School, Giacchino started his career composing scores for a number of successful video games including the Medal of Honor and Call of Duty franchises. In 2001 producer J.J. Abrams invited Giacchino to write the music for his television series, Alias and later the music for the hit cult series, Lost, for which Giacchino won the Grammy Award® for Outstanding Dramatic Score in 2005. He went on to compose the scores for a series of Pixar films including The Incredibles, Ratatouille, Cars 2 and Up for which he won an Academy Award® as well as a Grammy Award® for the film s soundtrack album. Since then, Giacchino has maintained a busy schedule scoring major motion pictures such as Mission Impossible III, Cloverfield, Star Trek (2009), Inside Out, Tomorrowland, Doctor Strange, Star Trek Beyond and the latest block-buster for the Star Wars franchise, Rogue One: A Star Wars Story.

4.6 out of 5 stars
4.6 out of 5
92 global ratings
How are ratings calculated?
To calculate the overall star rating and percentage breakdown by star, we don’t use a simple average. Instead, our system considers things like how recent a review is and if the reviewer bought the item on Amazon. It also analyzes reviews to verify trustworthiness.

Jay's Reviews
5.0 out of 5 stars Michael Giacchino The Newest Avenger Help's to Welcome Our Beloved Webbed Hero Back to MCU
Reviewed in the United States on July 8, 2017
Verified Purchase
Well let me start off by saying I am an avid collector of soundtracks and over the years since I first began collecting them i have amassed quite the collection listening to the likes of Danny Elfman James Horner Hans Zimmer and now the newest composer to my collection Michael Giacchino. Who is of course attached to the newest Spiderman revamp Spiderman Homecoming and of all the names that I just mentioned I have had the pleasure of listening to all their Spiderman soundtracks with each composer producing their own take on the popular character all with unique and different styles all of these wonderful composers have brought something fresh to the table. James Horner's take on the iconic character being my favorite musically I never had any doubt that he would return to the world of Spiderman but sadly that was not meant to be fast forward to the future Spiderman would yet take another direction a new movie new actor and another composer in the much needed rejuvenated Franchise and in came composer Michael Giacchino who would be the only one composer who actually incorporated the Spiderman theme song from the original tv series from 1967 and man the original theme does not at all feel like its out of place at all.

Now I'am in no way familar with composer Michael Giacchino but im a collector so i like to listen to and explore new composers and I can honestly say that I haven't stopped listening to soundtrack since i first started listening to it from start to finish its a great album as I feel it has everything you can expect from a Spiderman film score. Upon my first impression of this score was that at first i thought it started off a bit slow in the beginning but as I continued listening to it I have come to really like it to say I that too was bitten by a radioactive spider... well I minus well be because I love it. The themes and action pieces are great the Vulture's theme is so terrifying that it almost sounds like Michael himself had been watching a few horror movies while conducting the score its really is that scary relentless in its tone Spiderman Homecoming is overall as spectaular as it is refreshing and it does warrant repeated listenings and is sure to become a classic for years to come. Welcome Back Spiderman

Here are some of my favorite tracks so far

Jared Brown
5.0 out of 5 stars Read before buying!
Reviewed in the United States on July 26, 2017
Verified Purchase
Alert! Make sure you look at what you are buying before you buy this! This OST is instrumental music only! No songs in this one! However, as a movie score fanatic, I quite enjoy listening to it. Though this score seems different than most scores, it seems somewhat light and bouncy in some places.. Reminds me a bit of the one of the Indiana Jones scores..
Read more
One person found this helpful
Helpful
Report abuse

I_met_J_Williams
5.0 out of 5 stars Memorable tunes and high-energy score.
Reviewed in the United States on August 21, 2017
Verified Purchase
Great score--so much energy and playful fun to the music, and unlike many modern superhero scores, this one has MEMORABLE melodies and character themes (as you would expect from a Giacchino score). "Monumental Meltdown" is a particularly great track, but the overall score is highly recommended.
Read more
2 people found this helpful
Helpful
Report abuse

a_guy_in_boston
5.0 out of 5 stars another great symphonic work from giacchino
Reviewed in the United States on December 3, 2017
Verified Purchase
I really enjoyed this composition, with rich orchestration that cleverly matched the mood of the movie. I also really appreciated the liner notes, which credited all the musicians of the superb orchestra. This is a fine work, and a special treat for fans of classical music.
Read more
One person found this helpful
Helpful
Report abuse

JokesOnYou123
5.0 out of 5 stars Great score
Reviewed in the United States on July 8, 2017
Verified Purchase
I personally enjoyed the score. However is it just me but for those of you who bought the physical disc theres about an extra minute and 30 secs of singing at the end of the spiderman homecoming suite. it seems misplaced lol maybe Michael forgot to stop recording.
Read more
2 people found this helpful
Helpful
Report abuse

Anthony P.
5.0 out of 5 stars I absolutely love this CD
Reviewed in the United Kingdom on July 26, 2017
Verified Purchase
I absolutely love this CD. I am not familiar with the composer
Michael Giacchino but he is obviously a great film composer.
I recommend this CD. Thanks to Classic FM where I first
heard it played.
Read more
2 people found this helpful
Report abuse

Paul
5.0 out of 5 stars Spectacular
Reviewed in the United Kingdom on May 5, 2018
Verified Purchase
Amazing soundtrack, every song is amazing.
Read more
One person found this helpful
Report abuse