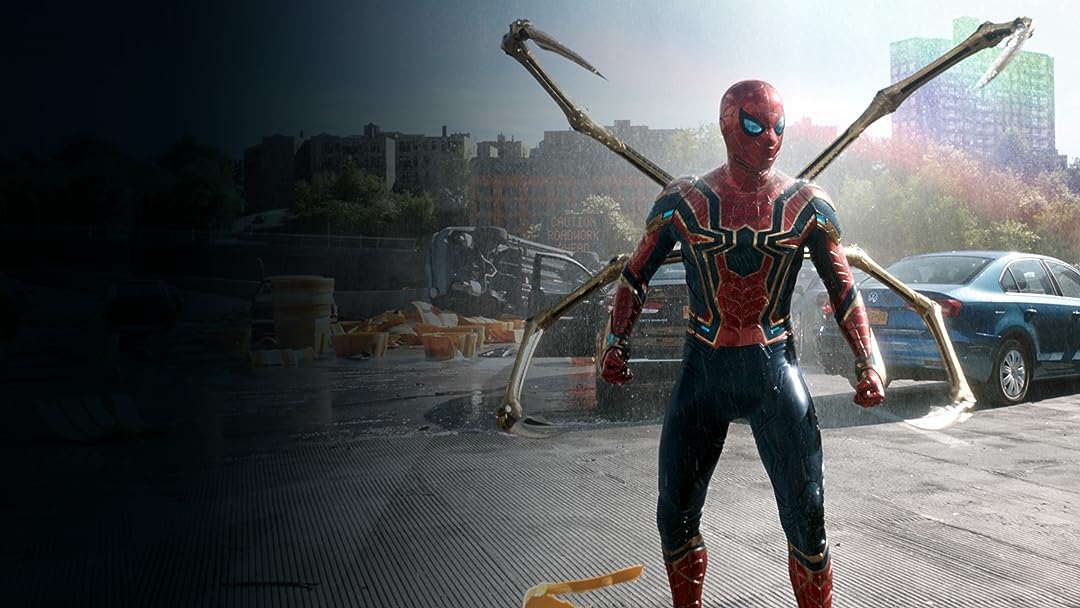 (63,126)
8.32 h 28 min2021X-RayHDRUHD13+
From Marvel Studios: With his identity revealed, Peter Parker asks Doctor Strange for help. But when a spell goes wrong, Peter is forced to discover what it truly means to be Spider-Man.

Watch with STARZ
Start your subscription
Add to
Watchlist
By ordering or viewing, you agree to our Terms. Sold by Amazon.com Services LLC.
Write review

Austin wintersReviewed in the United States on January 4, 2022
5.0 out of 5 stars
For the guy that cant read
Its a pre order. Meaning you can buy but have to wait to watch.... smh
135 people found this helpful

OliviaReviewed in the United States on December 20, 2021
4.0 out of 5 stars
i
I Bought the movie But it dusint let me watch it...
108 people found this helpful

SeanReviewed in the United States on July 8, 2022
4.0 out of 5 stars
Good Enough to Buy
Verified purchase
This movie was a buy it for me because it had Tobey n Andrew jump into the mix. Now as a fan of Marvel DC superhero stuff yeah who doesn't want to see the what if mix. Imagine if they did a Batman movie with ALL the Batmans. Or would it be Batmen ... West Keaton Kilmer Clooney Bale Pattinson etc oh you know they wanna.

This movie is better than the previous Spiderman movies. It's the best one. BUT as a movie it's ok to good not particularly a great movie that you wanna see again n again like Endgame. But had to buy it as a Spiderman fan to add to the trilogy. There's a lot wrong or that didn't make sense but I was entertained and that's what counts.

Amazon CustomerReviewed in the United States on March 15, 2022
2.0 out of 5 stars
Where are the bonus features?!
Verified purchase
One of my favorite movies ever, but I bought the movie so I can get access to the bonus features, and either they arent accessible or I cant find them. Veryy mad about the purchase cause of that
20 people found this helpful

Laurin HerberReviewed in the United States on March 15, 2022
1.0 out of 5 stars
Purchased on prime video app, unable to view on fire TV the day of digital release
Verified purchase
I purchased this digital file on 3/15/22 via the prime video mobile app - anxious to watch the movie after arriving home from work. To my dismay, I can not view my purchased file on any of my fire tv sticks or cube. Only way to view is on my mobile device, via the prime video app which is a huge disappointment. Especially after spending 19.99$ for this digital movie. It is evident that there is a lot of disorganization in the interfaces of tv/movie files from the prime video app, fire tv stick, fire tv cube and prime video desktop website - with several file discrepancies (resolution for initial price point, summaries, artwork, and now viewing platform availability).

The file itself shows as in my library and my watchlist on the prime video mobile app but does not show in my library/watchlist/any search function on either the fire tv cube and fire tv stick 4k.

KEITHReviewed in the United States on March 15, 2022
4.0 out of 5 stars
World Saving Information
Verified purchase
Spider-Man is awesome. Spider-Man is so humble. Peter Parker is being overwhelmed with media attention. The whole world knows that Spider -Man is Peter Parker, played by Tom Holland, a seventeen year old student at Midtown High. Peter Parker can be so naive; when he confronts danger, Spider-Man experiences calamity like us. In "No Way Home" it is in the secret places where the story binds our interest. Like a young superhero on a verge bordering cosmic secrets, in strange and dark settings, Spider-Man learns that a marred spell has brought visitors from the multiverse.
The special effects become magic when Spider-Man confronts an electric ghost form, spewing starlit radiant beams of energy at him. Here, Spider-Man can't be spell-bound for too long, but must negotiate resources to at least contain this unwieldy intruder. The brilliant pixellated clarity of the city scape, at night, remains-even in the green and swampy miasma of explosions and debris. These dark characters have sworn themselves to villainy, for the current time and in any world. Then it happens that Lizard man can jump through a portal and be in a living room. Spider-Man nervously follows in behind to help.
It's a gang war; these foes, the Sandman included, try to negate Spider-Man's intervention. It seems that all the excitement is about a 'macchina di kiddivus', which started the whole conflict in the first place! There is silliness so that we know that the city populace will help Spider-Man-with practical affairs. Ironically it's Spider-Man's girl who will grieve in the end, but Spider-Man wrote the book on accepting isolation.
9 people found this helpful

YuryReviewed in the United States on April 3, 2022
1.0 out of 5 stars
the most boring MCU movie
Verified purchase
SPOILERS BELOW! I only finished watching it because Zendaya is just too fine. Plot is BORING and totally linear and predictable, characters behave like 5 yo kids, Doctor Strange acts like a 5 yo kid endangering the entire universe just to please a crybaby who can't cope with responsibility of a super hero. The entire movie is based on the idea that ONE VIDEO recorded on your phone undeniably proves your guilt if the guy on the video says so. And then you see a bunch of guys from old Spider Man movies (because Doctor Strange decided to risk to undo everything all of the Avengers achieved before). It is so cool! Like you can invite some actors from some other movies and try to cover holes in the plot which is the most shallow MCU movie plot so far. Even Black Panther doesn't look that bad now I would probably rate it 2 or 3 stars.
10 people found this helpful

LuxReviewed in the United States on March 21, 2022
1.0 out of 5 stars
Was all hype and bad direction and writing
Verified purchase
All the characters dialogue is the same dumb personality. Example May offers Doc Ock a glass of salt water because she thinks he is an octopus because of his name. Even Doctor Strange acts like Forrest Gump in this amateur quality screenplay. The movie is all pandering fan service and exists purely to retcon all the reboots into canon. It will be sad if they do this with X-Men and Fantastic 4. The director managed to make this fine cast seem like weak actors. Makes me appreciate Sam Raimi’s first two Spidey movies all the more. No way home is mildly entertaining visually and Andrew Garfield is at his best & steals the show. It gets a 3/10
9 people found this helpful
See all reviews
Back to top
Get to Know Us
Make Money with Us
Amazon Payment Products
Let Us Help You
EnglishChoose a language for shopping. United StatesChoose a country/region for shopping.
© 1996-2022, Amazon.com, Inc. or its affiliates