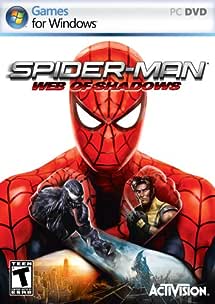 A deadly symbiote invasion brings devastation to New York City. In Spider-Man: Web of Shadows, the game is set in an apocalyptic vision of the city. You'll have complete control over New York City's salvation and the fate of Spider-man. It also features an all-new combat system that allows for three-dimensional battles that can start on the street and end up on rooftops. You can also switch between the red and black Spider-Man suits, choose to ally with Marvel's heroes or villains and decide what missions to undertake to save Manhattan from destruction.

Extra Credit - As you progress, you earn experience in multiple combat disciplines so you can custom-design your ideal Spider-Man Instant Replay - dozens of story choices and character customization options

CubOfJudahsLion
3.0 out of 5 stars The Bugs Could Ruin Your Experience
Reviewed in the United States on November 26, 2011
Platform: PCVerified Purchase
As the title says -- don't even bother. Gameplay isn't so bad (a little repetitive though) and you even might have a good time with it -- right until one of the game's many bugs cuts the experience short. The title is notorious for its many unsolved issues. Even after applying the 1.1 patch, my copy continues to stutter and lag at random points, and predictably and dutifully crashes on me when I reach a certain point, which prevents me from advancing. Whoop-dee-doo. That's nine bucks down the drain. If you want a superhero game, this ain't it. I hear Arkham Asylum is pretty cheap these days.

After some time I felt like giving this another chance. Things went better this time, so I'm guessing I had bad luck the first time -- however, both installs ran on the very same hardware (same DVD drive, not a jumper moved out of place) and same Windows 7 installation, so I'm still blaming the game for the glitches, and I still think it needed more polish before hitting the shelves. Polygons were still flashing through one another, New York still appeared boxy and lifeless, and the timing of the whole fading to/from black thing in cutscenes was still a little off, but I could play, dang it.

In fact, I actually managed to enjoy myself this time: it IS fun to be Spider-Man, to web-swing at full speed between the skyscrapers and use the many moves available (the red and black suits have each their own unique attacks) to punish your enemies. It DOES get somewhat repetitive, and the story is minimal, but the core game mechanics do work.

Wicasawakan
4.0 out of 5 stars Great polish but 1 or 2 flaws
Reviewed in the United States on July 9, 2012
Platform: PCVerified Purchase
I recently purchased this for the PC. I have a Windows 7 rig with 640gb HD, 6gb RAM and a Radeon 6370 card. It's not the highest quality gaming rig. Now for the Pros and Cons:
Pros:
This looks great! Graphics are very well rendered and blend well. No getting stuck in between walls.
It's controls are great! Combat is repeatative but simple and changes up a bit with different combos. But we are talking about how this was made. It runs very well.
On a Windows 7 rig, many older games don't run well (or even not at all). It was great to install it and have it run immediately. It also did not require any kind of activation or registration! Well done! Those are so annoying.
-
So so:
Voice acting. Not top shelf but it's not all that bad.
-
Cons:
As for the gameplay/fighting, it can be repeatative button mashing but as stated, you can sort of change it up with web swings and web blasts. Also you can change from original suit to the black suit and fight a little differently.
CHASES...My all-time "hate" in games. I hate chase taskers that say you failed to follow someone or outrun someone. If I wanted to play a racing game I'd buy a game where you race cars. This is spiderman. Thumbs down on these tasks.
Wall walking. Prototype had it right. Just run up to the wall and go. In Spiderman WoS you have to press a key to wall walk? It's really annoying.
I have not completed the game yet but I hear there are 4 possible endings depending on your choices. Looking fwd to finishing it.
Read more
Helpful
Comment Report abuse

Thomas Milroy
5.0 out of 5 stars Keeps Getting Better!
Reviewed in the United States on May 21, 2010
Platform: PCVerified Purchase
I have owned and played just about every Spider-Man game ever made and this one is by far the best. Every time they make these games it gets a little bit better. There are more iconic animations, and even when you're making "mistakes" now, Spider-Man still looks cool. For instance, in Spider-Man 3 he would bump into walls and look like a fool, but now he runs on walls always instead of bumping into them, and feels like he has a lot more strength (more like the comic books). There are many improvements in that department so I won't list them all, but they are getting closer and closer to perfectly fluid animations 100% of the time. Great job in this one.

The black suit has always been my FAVORITE. In all of the past games most didn't even have the ability to use the black suit, and when they did it was really hard to get, or didn't really do anything special, and you were always kind of pushed to NOT use it... which was a terrible shame.

This game lets you use the black suit ALL the time and you can switch it on or off at any moment without even going into a menu, the way it should be! The black suit looks awesome, and has entirely different abilities when you're using it. You can switch between red and black between combos even if you like to get that crazy.

The battle mechanics have been completely enhanced. You can pull yourself into any enemy with your web non-stop in a beautiful display of aerial acrobatics as you lay waste to your foes in any plain you chose to fight on. The ground, the walls, or in the sky. All 3 are equally entertaining and provide so many dynamics that the fighting is only boring if you're choosing to make it that way by being repetitive. If you like only fighting on the ground, you can pull your enemies down there so you're not forced to fight on walls or in the air generally (but the new aerial fighting moves are an absolute blast!).

The hidden Tokens this time are a lot easier to find, and all they do is increase your web swinging speed and reach, and you don't have to get all of them to feel extremely godly in your distance and abilities.

There is only ONE tiny problem with this game. You can't do a web swing with both hands shooting a web out, (swing from left, to right, kind of like a monkey not quite letting go of the first branch before grasping the next)This is a very iconic way of web swinging and it is sad that it took a while to get it in these games, and now it's gone. I'm pretty sure it was Spider-Man 3 that finally got that in the game almost perfectly, so it is really odd to see that a feature was lost in this game. Over-all it is still a huge improvement in just about every other aspect compared to the predecessors(other than graphics but that is to be expected as they are pumping these games out faster than graphics and processors can get much better).

I think this game runs a little better than Spider-Man 3 because they want back to a more comic book style (not cartoon-like, or cell shading though) and it is not trying to do complex shading and reflections. In fact, there are absolutely no options to mess with the graphics other than resolution which is kind of odd. You certainly need one heck of a CPU to run it smoothly though. I have a really nice Intel Quad Core and an Nvidia GTX 295 and the FPS doesn't hold completely solid if you have the entire city in your field of view and you're zooming really fast. Still runs better than Spider-Man 3 though, and is perfectly smooth for me about 99% of the time.

If you enjoyed the other Spidey games, then this one is a major upgrade to the series!
Read more
5 people found this helpful
Helpful
Comment Report abuse
See all reviews

Page 1 of 1 Start overPage 1 of 1
This shopping feature will continue to load items when the Enter key is pressed. In order to navigate out of this carousel please use your heading shortcut key to navigate to the next or previous heading.
Back
Next
Pages with related products. See and discover other items: web software, Explore marvel spiderman games for pc