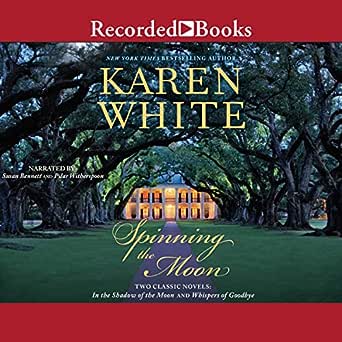 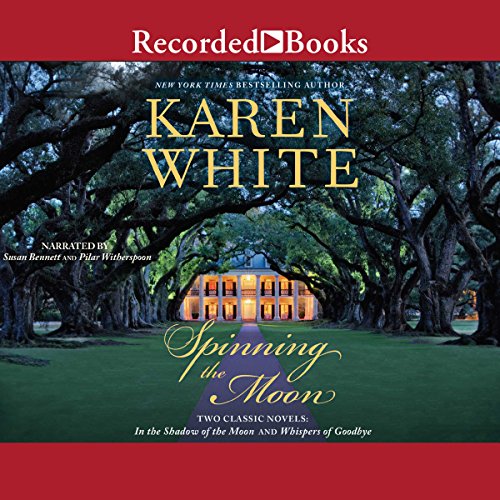 4.5 out of 5 stars
4.5 out of 5
280 global ratings
How are ratings calculated?
To calculate the overall star rating and percentage breakdown by star, we don’t use a simple average. Instead, our system considers things like how recent a review is and if the reviewer bought the item on Amazon. It also analyzes reviews to verify trustworthiness.
Top reviews

Michelle Boytim
4.0 out of 5 stars Travel back to the Civil War and Reconstruction
Reviewed in the United States on June 28, 2020
Verified Purchase
This book includes two of Karen White’s early novels: “In the Shadow of the Moon” and “Whispers of Goodbye”. In the first, Laura and her husband find an old plantation home while searching for their new house. Laura is completely taken by it, despite it not being for sale. When she knocks on the door, the woman who owns it seems to be expecting her and shows her an old picture around the time of the Civil War that has a woman who looks remarkably like Laura. They arrange to buy the house and they move in prior to the birth of their daughter. Laura is hit by a series of tragedies, and on a lunar eclipse, she is pulled back into the past. There she continues her search and befriends the family now living at the house. She works to survive and solve the riddle of how to return to her present. But feelings begin to emerge, both for the family and for a particular man, and she knows she must do everything she can to save them from the upcoming destruction before she returns. In the second novel, Catherine leaves her home in the Reconstruction south based on a desperate plea from her sister. When she arrives, her sister has vanished, but she is welcomed by her sister’s husband and is shocked to see that her sister now has a daughter. Something is not right in the household, and Catherine begins to see disturbing things that she is having trouble explaining. When her sister turns up dead, her relationships become more complicated and she must decide where her loyalties lie. The book definitely has shades of the fairytale Bluebeard, but keeps you guessing until the suspenseful climax.
Read more
One person found this helpful
Helpful
Report abuse

Thistle
5.0 out of 5 stars Read these edited versions instead of the originals.
Reviewed in the United States on February 12, 2019
Verified Purchase
There are two edited versions of her original books, “In the Shadows of the Moon,” and “Whispers of Goodbye,” in this book.

“Whispers of Goodbye” was superb. Would love to see her write more period pieces, since her writing is so good she can definitely pull it off.

“In the Shadow of the Moon” was very good considering it was the first book she ever wrote, but editing could not fix all the holes in the plot without rewriting the whole book.

I sure couldn’t have done any better. Some of the quirky parts of the plot, such as including the heroine’s interaction with the real General Sherman, could have been absurd if she hadn’t written it as well as she did.

There were some parts of the plot that were bizarre and unnecessary such as in the first part of the first book. The main character is walking up “Moon Hill” with her husband and toddler in public. It is summer in Georgia which, granted, is extremely hot, but who walks up a hill, removes their shirt to walk up in just her bra? First of all, the bra is what would be making her hot, not the darn shirt.

I read the first one in three days and the second one in four days, so just that says a lot. That is one of the thing that is amazing to me even in her current age books. That her writing is so good, you can’t put down a just ok plot.

BookNut
5.0 out of 5 stars Wonderful stories! I'm Karen White's newest fan. Can't wait to read the next book I've purchased.
Reviewed in the United States on September 12, 2016
Verified Purchase
I loved how heartwArming these stories were with mystery intertwined in both. karen White brings the reader back to the civil war times and how women left behind suffered, took part in the war behind the scenes. imagined or not, and made a huge difference. These stories will grab your heart and won't let go. Unforgettable!
Read more
10 people found this helpful
Helpful
Report abuse

avid reader U.S.Top Contributor: Coloring
5.0 out of 5 stars I loved these stories - especially the 2nd one
Reviewed in the United States on March 1, 2017
Verified Purchase
FABULOUS! Two stories in one book. I have all of Karen's stories and just finished re-reading these two stories.

The second story "In The Shadow of the Moon" I feel is the best of the two. This story reminds me of Daphne du Maurier's writing. The characters are well drawn, John is the handsome mysterious man that you want to like and yet find yourself wondering about his secrets. There is a lot of suspense and you can truly find yourself drawn into the story and it is hard to put down. I do wish that Karen would write more stories along this line.
Read more
5 people found this helpful
Helpful
Report abuse

BamaJo
4.0 out of 5 stars Great love story and time travel back to the civil war era
Reviewed in the United States on October 12, 2016
Verified Purchase
I thought the author did a very good job of taking you back to the civil war era in the South. Both tales are a love story of sorts that kept me interested until the very end - which is why I rated it 4 stars. The picture on the front of the novel is Oak Alley Plantation in Louisiana and I have visited there and I imagined that house the entire time I was reading the book. I have like all of her books but this one was unique since it involved time travel - totally fictitious, but still interesting.
Read more
12 people found this helpful
Helpful
Report abuse

manzanillogirl
5.0 out of 5 stars The richness of these early works makes them among Karen's best
Reviewed in the United States on October 6, 2016
Verified Purchase
I was amazed that these were her earlier books. I am so glad that they were brought back and republished. Well and richly written. 2 of her best works. In my opinion they both had a bit of a dragging half way through due to their length. Keep reading. You will love them. Write me back if you did too.
Read more
3 people found this helpful
Helpful
Report abuse

Amazon Customer
5.0 out of 5 stars Karen White is the best!
Reviewed in the United States on August 8, 2018
Verified Purchase
I'm on a mission to read all of Karen White's books. I started about a year ago reading "On Folly Beach" and that began my trek. She is one of the best writers I've read in many years. Reading one of her books right after the other is not like eating too much candy or steak, but it's like reading different authors. Her stories are so different from each other. The Spinning Moon is actually two books with completely different characters and plots. Great reading. Beautifully written stories.
Read more
Helpful
Report abuse

Lady Darlene
5.0 out of 5 stars Curl up with your favorite beverage and enjoy
Reviewed in the United States on October 21, 2020
Verified Purchase
It was so much fun to read a book on time travel into the Civil War time and then follow up with a book that followed the Civil War in a different state. Both hooked me right away. The characters are so plausible and the stories were believable. Highly recommend this to anyone who loves time travel and/or civil war era stories.
Read more
Helpful
Report abuse
See all reviews