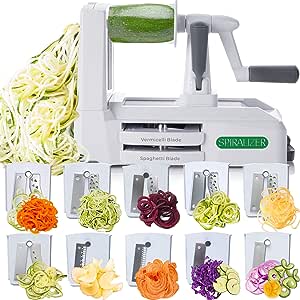 Visit the Spiralizer Store
4.6 out of 5 stars 9,628 ratings
Amazon's Choice recommends highly rated and well-priced products.
Amazon's Choice for "vegetable spiralizer electric"
Available at a lower price from other sellers that may not offer free Prime shipping.

This is hands down the Best Spiral Slicer on the Market! If you want a superior product at an exceptional price then Spiralizer’s newest and only 10 blade Spiralizer on the market is for you. WHAT MAKES IT THE BEST? Comes with 10 ultra sharp stainless steel blades for all your spiralizing needs Extra blade caddy for safe storage of all extra blades. Works great even for long and wide veggies (up to 10" long x 7" wide) Made from top quality, food-safe, durable reinforced ABS plastic Safe to use, easy to clean & dishwasher safe (top rack only) Non-electric grater, ideal for emergencies and camping For the utmost peace of mind think Spiralizer, and choose the Spiralizer 10-Blade Spiralizer now! Choose with confidence!

Keep out of the reach of children.

4.6 out of 5 stars
4.6 out of 5
9,628 global ratings
How are ratings calculated?
To calculate the overall star rating and percentage breakdown by star, we don’t use a simple average. Instead, our system considers things like how recent a review is and if the reviewer bought the item on Amazon. It also analyzes reviews to verify trustworthiness.

Augusta
5.0 out of 5 stars Great little device
Reviewed in the United States on August 23, 2018
Verified Purchase
I've had this for a while now and have tried it on different things, so my review is based on experience, rather than "new owner enthusiasm." You really get your money's worth out of this sturdy, smart device. I have nothing but good to say about it. Tips I've learned from my experience: (1) I suspect that reviewers who have said that the suction doesn't work well may not have cleaned and dried their counter well before applying the suction, or they might not be taking into account that some counter cleaners contain oils that are interfering with the suction. The suction on mine works great -- surprisingly solidly anchored, yet easy to release with the push of a button. (2) Don't make the mistake I first made when trying to spiralize sweet potatoes. Trying to spiralize a long chunk of potato will just cause the end in which the spikes that are sticking into it, to hold it in place while you turn the handle, to crumble and fall apart, and you won't be able to spiralize. Instead, cut the potato into sections 2 or 3 inches long before you spiralize. That makes a world of difference, and you'll still get nice long spoodles (sweet potato noodles) :-) (3) As for folks who complain that the spiralizer's shape doesn't lend itself well to pushing a bowl or whatever under the place where the noodles come out, so these folks are having difficulty catching the finished product as it emerges: A bowl is the wrong shape for you to use for this purpose. You can easily catch all the noodles as they come out by placing a rimmed baking sheet on the counter, snugly against the base of the machine under the place where the noodles come out. That will catch everything. Final thought: It's so satisfying to buy something that really works as well as it says it does. This gizmo is a bargain and far exceeded my expectations. Don't you love it when that happens?
Read more
811 people found this helpful
Helpful
Report abuse

William Wright
5.0 out of 5 stars Easy to use, just like in the movies! Just spin it to win it!
Reviewed in the United States on April 10, 2018
Verified Purchase
I made some zucchini noodles for sausage alfredo last night... fantastic.

I started off securing it to my counter with the suction bottom. Flipped a switch and it sat there like it was screwed into the wood. I gave the manual a quick once over, because RTFM. Doing that told me exactly which blade to use - they're all labeled with two letters on top that correspond with the notes in the manual, which gives a description of which one to use depending on your goal.

I made sure I had a cleany zucchini, because nobody likes them dirty, and then skewered it in place. Spin it to win it. I didn't even need to use both hands, but sometimes you need that extra grip, especially when you're dealing with a girthy zucchini. After, I was left with 12 foot long noodles (size does matter,) a tiny zucchini disc, and a... heh... wiggly core. On a side note, you may want to cut whatever you're spiralizing in half - if it's long. That would probably make the noodles are a little easier to manage. I sauteed 'em up, sauced 'em, and served 'em. Delicious - my wife agreed. The zoodles were 'al dente,' but I think they would have been better if I would have just poured the hot alfredo over raw noodles. Yeah, a little crunchier, but I think the flavor and texture would have been better. Maybe it's just my zoodling (zoodle cooking) technique, but I digress...

Cleaning up was a snap. I took the scrub brush, soaped it up, and gave it a once over, washed it off, and set it to dry. I have yet to try it in the dishwasher, though the manual says it's safe. So far, no staining or other "grossness."

I can't wait to see what else I can spiralize. I bought a bunch of stuff I've never even given a second glance - vegetables! Specifically rutabagas, beets, cucumbers. (The only good cucumber is a pickled one, I say.) Whatever. I'm gonna spiralize it all. I'll spiralize veggies, I'll spiralize fruit.. I'll spiralize the world! I might even spiralize my friends if they're lucky.

I'll update this review as time goes by and I get to really put this proverbial puppy through its paces.

Disclaimer: Not for use on friends or pets.

Amazon Customer
5.0 out of 5 stars Two thumbs up!!
Reviewed in the United States on January 8, 2018
Verified Purchase
My husband is a type-one diabetic, and spiralized vegetables are great ways for us to enjoy rich pasta dishes without so many carbs. We've evolved from the hand-held Veggetti, which worked well with zuccini, but didn't offer the range or versatility of the Spiralizer. This is the second counter-standing Spiralizer we've owned (the first one still slices splendidly, but I had misplaced some of the various blades) and both have been awesome! The company has made improvements to the new Spiralizer so it more stablely grips the counter top and does not slide as you're spiralizing. In addition, it comes with a container to help keep all of the blades organized, a tray with lid for the produce to fall into, better labeling of which blade is which, and is easy to clean. I highly recommend this spiralizer. I've also purchased some cookbooks specifically for spiralized meals. Each dish has turned out beautifully and the Spiralizer has done an effortless job cutting the veggies just as desired. Attached is a photo of our dinner from last night: homemade falafel, turkey kebabs, and a thahini roasted beet noodle salad (beets were spiralized and placed in oven to roast). Again, great tool for a healthy kitchen!!
Read more

TailorMade
5.0 out of 5 stars Best purchase!
Reviewed in the United States on January 1, 2018
Verified Purchase
Absolutely love this! I’ve used it several times and I get perfect spirals every time. It’s so easy and quick and then clean up is easy too. I have no complaints. The leftover piece comes out looking like a giant noodle which my kids love eating. They call it alien vegetables. I wish I had bought this sooner. I had the handheld spiralizer and really hated that one. If the vegetable was more firm it was near impossible to use. This goes right through beets and sweet potatoes.
Read more

Cann
4.0 out of 5 stars Pricy but Works pretty well.
Reviewed in Canada on August 15, 2020
Verified Purchase
Takes a little time deciding to use which cutter to use. Also found another spiralizer a lot cheaper that looks the same. This one $70 and other around $30
Read more
Report abuse

Dennis A
5.0 out of 5 stars Great machine for low carb diets
Reviewed in Canada on November 9, 2020
Verified Purchase
Arrived broken but was taken care of and replaced right away, this machine works awesome and I highly recommend it
Read more
Report abuse

shawn simis
5.0 out of 5 stars Awesome
Reviewed in Canada on October 28, 2020
Verified Purchase
use all the time now is great
Read more
Report abuse

Mary John
1.0 out of 5 stars product may not be in pristine condition
Reviewed in Singapore on December 24, 2020
Verified Purchase
Product's white casing had yellow spots and had minor damage on one edge. Looked like it might not be a new. Tried to contact reseller but no response. Product works as advertised.
Read more
Report abuse
See all reviews