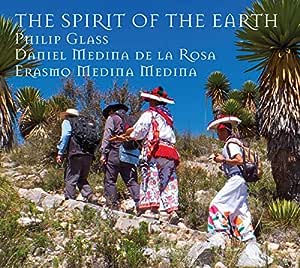 The Spirit of the Earth

As part of his lifelong quest to unravel the mysteries of music, Philip Glass has traveled the world collaborating with musicians of different ethnic and cultural backgrounds. In 2012, he journeyed into the mountains of Mexico to connect with the Wixarika people. The product of that collaboration, The Concert of the Sixth Sun, allowed us a glimpse into the Wixarika's indigenous world. The Spirit of the Earth is a new collaboration between Philip Glass, Daniel Medina de la Rosa, and Erasmo Medina Medina that delves further into the mysteries of the Wixarika culture.

Dr. Debra Jan Bibel
TOP 1000 REVIEWER
4.0 out of 5 stars Mexican Minimalistic Musical Meditations: Indian Spiritual Songs
Reviewed in the United States on January 4, 2019
Verified Purchase
This two-disc live concert album revisits the collaboration of Philip Glass with Wixarika musicians of Mexico [previously, Concert of The Sixth Sun]. These indigenous people dwell in various areas of Mexico and are better known as the Huicholes, whose shamans use peyote and whose colorful yarn art reflects the spiritual visions and ethos of the community. Less appreciated is their music and instruments. Glass has frequently worked with traditional world musicians, such as from West Africa, Brazil, India, Australia, China, Japan, and Tibet; his youthful work with Ravi Shankar on the score to Chappaqua had impacted his subsequent outlook. Much of the music of the Wixarika is associated with life events, rituals and ceremonies, but also, as on this album, reflections of spiritual encounters, sometimes in dreams. Each disc consists of only two songs, each of some 35–40 minutes. The indigenous fiddle (xaweri) and home-made guitar (kanari; the image shows four frets, but often it is made fretless) are joined with Glass's sparse piano accompaniment. The package lyric translations describe the first piece, Wise Deer, as about the primal deer that knows everything and the future, that blesses the pilgrims, all sacred lands, all elemental deities of Nature, and that supports the sacred cactus and the pollen of the desert. Like some of Glass' own early works and those of Minimalists, very little musical change occurs over the course of the song played by the three musicians. There is no drama, but the consistency furthers a calming meditation. The second song tells of the Kakayare deities asking the mountain pilgrims whether they are sincere, truly open to the experience; the song is translated as Are You for Real? Glass creates a middle section through reducing even further his harmonic chords. We Are in The Wind, the third piece, is about messages from the ancient spirits of the land carried to all who will listen and perceive the connections, the unity. The concluding song is about Hikuri (the sacred peyote cactus) and its entheogenic powers. This last work is the more interesting, having a different, faster tempo and a jocular beat. Indeed, it is very similar to Meredith Monk's Arctic Bar scene from her Facing North. The shamanistic songs' musical repetitions soothe and clarify the mind and entrain the breath. Not much happens musically at the surface, but the perceptive effects are profound.
Read more
8 people found this helpful
Helpful
Report abuse

Lauro Urbina Lopez
5.0 out of 5 stars Special music
Reviewed in the United States on May 24, 2019
Verified Purchase
Even Philiph Glass is not the performer, and I wonder if he is the author, but the pieces of music have all the spirit of the best Glass Music. This record is one of the best from Philliph Glass. At the same level than Koyaanisqatsi, Naqoyqatsi, Powaqqatsi, Anima Mundi, The soundtrack of The Hours, Einstein on the beach and last but no the least, The symphony Heroes wit Brian Eno, Passages with Ravi Shankar
Read more
One person found this helpful
Helpful
Report abuse
See all reviews