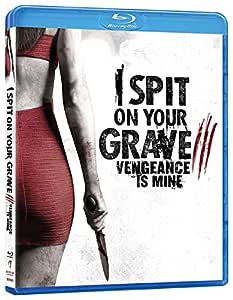 I Spit on Your Grave 3: Vengeance is Mine [Blu-ray]

After seeking out the help of a support group after her attack, a young woman takes the law into her own hands and dishes out her own brand of justice to the abusers of her fellow group members. Sequel, in essence, to I Spit On Your Grave (2010).

4.0 out of 5 stars
4 out of 5
413 customer ratings
How does Amazon calculate star ratings?
Amazon calculates a product’s star ratings based on a machine learned model instead of a raw data average. The model takes into account factors including the age of a rating, whether the ratings are from verified purchasers, and factors that establish reviewer trustworthiness.

Peachey T
5.0 out of 5 stars I had no problem encouraging the abused female lead
Reviewed in the United States on November 15, 2016
Verified Purchase
I watched all 3 of the Spit on your Grave series and loved it. Some of the abuse that the female lead had to endure was a little hard to watch, but I had no problem encouraging the abused female lead to pay her abuser back and boy did she. This one was the original female lead coming back for more. Unfortunately, we see in the news that there are some guys out in the world that get off on this kind of crap and the should be punished in the most harsh way possible.
Read more
8 people found this helpful
Helpful
Comment Report abuse

PR GUY
5.0 out of 5 stars ANGELA IS ABOUT TO SNAP!!!
Reviewed in the United States on July 24, 2017
Verified Purchase
Not for the squeamish! I gave it all 5 stars. This is a great third film in the "Spit" trio. Don't mess with Angela (Sarah Butler). She's about to snap and any and everyone in her path is a potential victim of being slaughtered (to say it mildly). Need I say more? Butler does an excellent job as the main character in this thriller. She holds the film together. The rest of the cast is so-so. If you've seen the first two flicks, the third is a must. I'm hoping there is a fourth...and beyond.
Read more
2 people found this helpful
Helpful
Comment Report abuse

Nicholas
5.0 out of 5 stars I'm in loves with this series!
Reviewed in the United States on October 24, 2015
Verified Purchase
I have to say... Just WOW! I'm in love with this series, and if they make a fourth I hope they find away to continue with the same awesomeness they've been doing.
I loved the idea of having Jennifer come back, showing how she's dealing with everyday life. Hating all men, thinking anyone nice is out to get her for something, and having this built up rage inside when victims aren't strong enough to fight back or wronged by the justice system.

I will say, the ending was some what underwhelming, and I felt it was rushed. I mean, she was kicking a$$ and taking names fighting for those who've been wronged, and even though it was extremely gruesome you were on her side, and some how felt what she did was justified. Then it got to the ending, where she dressed in a very revealing outfit, and went out looking for someone to attack. That was the ending they went with... I would have expected that if they knew she was hunting people's rapist from the group that they would have an actor go in, tell a horrific story and trick her into trying to track this man down and catch her red handed.
But instead... They send her out on the town in a red dress looking to attack the first man that takes her sex offer seriously. It destroyed everything about her character in my opinion. All in all, I loved the movie and I'm very happy with my purchase.

Kindle Customer
2.0 out of 5 stars Spoiler alert. Not as exciting as the first two movies
Reviewed in the United States on March 27, 2020
Verified Purchase
I thought the first two movies were great. I love revenge movies when a person gets the bad guys back. 3 was a let down. Spoiler alert! The victim from the first movie turns into the same kind of people that harmed her originally. Boo!
Read more
Helpful
Comment Report abuse

Kristof V.
1.0 out of 5 stars Unlike the 1st two movies, this one is terrible
Reviewed in the United States on October 16, 2019
Verified Purchase
Just a horrible movie overall. The first two movies were awesome, but this one not so much. Avoid purchasing this B-movie, unless you like to waste your time and money.
Read more
Helpful
Comment Report abuse

Keina M
5.0 out of 5 stars Great movies
Reviewed in the United States on September 20, 2016
Verified Purchase
Awesome movie. Must see the first one to consider it awesome. The first one was hard to watch, almost shut it off because it was disturbing but it was the best revenge scene I'd ever saw which made me watch the sequels. This movie had the same character from the first one and continued the story which made the third movie great. Great movies.
Read more
One person found this helpful
Helpful
Comment Report abuse

Skip BizR
4.0 out of 5 stars great sequel
Reviewed in the United States on March 11, 2019
Verified Purchase
Was a great revenge film. Part one was a better Sarah does an amazing job. As always is an great actress this one's more of the story of dealing with the issues and reliving it then shut hits the fan sets up for a killer part 4 let's see if it's bloody
Read more
Helpful
Comment Report abuse

cj malone
3.0 out of 5 stars Beware of your dreams and friends
Reviewed in Canada on October 18, 2017
Verified Purchase
Found that this movie could of used a better counseller for the part,as I found that she did not fit the part that she was supposed to be playing.
This movie was not as good as the other two,aas you did not know if the events were real or was she dreaming, while telling the counselor.
There was some very graphic scenes in this movie,not recommended for audience under 17.
Read more
Helpful
Sending feedback...
Thank you for your feedback.
Sorry, we failed to record your vote. Please try again
Report abuse

Mart666
4.0 out of 5 stars Good movie but lack of french sounddtrack
Reviewed in Canada on November 5, 2015
Verified Purchase
We return to the victim of the first film, a few years later. She decides to take revenge other attackers. It's okay, I do not regret my purchase. Note that Blu-ray does not have a French translation. I take off a star for the lack of sound tracks in French.
Read more
Helpful
Sending feedback...
Thank you for your feedback.
Sorry, we failed to record your vote. Please try again
Report abuse

Craig Hamilton
4.0 out of 5 stars 3rd Time's a Charm
Reviewed in Canada on July 4, 2016
Verified Purchase
Bringing back the original actress from the first film was very smart. It's more like a part 2 than a part 3. If you liked the first one, you'll definitely like this one.
Read more
One person found this helpful
Helpful
Sending feedback...
Thank you for your feedback.
Sorry, we failed to record your vote. Please try again
Report abuse

Mike
5.0 out of 5 stars Good one!!!!
Reviewed in Canada on January 18, 2016
Verified Purchase
Nothing like the '10 version but still great movie!!!
Read more
Helpful
Sending feedback...
Thank you for your feedback.
Sorry, we failed to record your vote. Please try again
Report abuse

WENTZEL VEZINA
5.0 out of 5 stars Five Stars
Reviewed in Canada on March 22, 2016
Verified Purchase
Thanks again five out of five
Read more
Helpful
Sending feedback...
Thank you for your feedback.
Sorry, we failed to record your vote. Please try again
Report abuse

Dartanion Johnson
1.0 out of 5 stars Watch the others! Skip!
Reviewed in Canada on December 3, 2015
Verified Purchase
If you are a fan of the two movies before this one then you should just skip this one. Painfully acted and at times looks more like a comedy. Also the storyline completely crumbles at the end and you'll literally say, "That was the movie? Wait it's over?"

There is no emotion or drive in this movie. No tension or dread, just dream scene gore mainly. When the killings finally start to happen you just won't care and as the ending draws near you'll be confused as to why anything is happening. I liked the first two movies and trusted the reviews on here for this one (a mistake). This is a lame movie.
Read more
One person found this helpful
Helpful
Sending feedback...
Thank you for your feedback.
Sorry, we failed to record your vote. Please try again
Report abuse

D.W.H
3.0 out of 5 stars cut me up buttercup
Reviewed in the United Kingdom on November 14, 2015
Verified Purchase
she spends half her time talking to a therapist and the a quarter of the time killing for fun,an ok follow on to 1 & 2....make sure its region 2 as the seller ALL YOUR MUSIC will send you 1 on purpose.so you cant watch it
Read more
One person found this helpful
Helpful
Sending feedback...
Thank you for your feedback.
Sorry, we failed to record your vote. Please try again
Report abuse