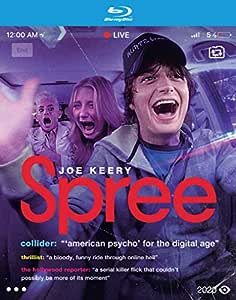 Meet Kurt, from @KurtsWorld96 (Joe Keery). He dreams of sitting atop a social media empire, but for now he drives for the rideshare company Spree. Fortunately, Kurt has come up with the perfect way to go viral: #TheLesson. He’s decked out his car with cameras for a nonstop livestream full of killer entertainment – murdering his passengers. In the middle of all this madness, a stand-up comedian (Sasheer Zamata) with her own viral agenda crosses Kurt’s path and becomes the only hope to put an end to his misguided carnage.

3.6 out of 5 stars
3.6 out of 5
3,443 global ratings
How are ratings calculated?
To calculate the overall star rating and percentage breakdown by star, we don’t use a simple average. Instead, our system considers things like how recent a review is and if the reviewer bought the item on Amazon. It also analyzes reviews to verify trustworthiness.
Top reviews

Robert B. Kruchek
1.0 out of 5 stars Don't bother
Reviewed in the United States on August 15, 2020
Verified Purchase
The previews were the best part of this movie. Maybe it's more for the self obsessed selfie generation, if that's not you then beware.
Read more
21 people found this helpful
Helpful
Report abuse

Steve Torrini
5.0 out of 5 stars Spree Driver Goes On Killing Frenzy
Reviewed in the United States on August 15, 2020
Verified Purchase
I saw Kurt's IG account a couple weeks ahead of the premiere. The marketing for this movie was insanely clever. I was super intrigued by Kurt, as his character is desperate for clout, which you see online every day. What happens when someone like this gets pushed past their limit? I cant wait to buy this movie again for all the extra content that didnt make it into the final cut, even though i probably watched most of it on the @kurtsworld96 account already. The premise is genius, and think it was executed very well. Sasheer Zamata as Jessie Adams really stole the show with her performance. Spree had very smart and sincere moments that make you think about online culture. It also had the gummy bear song. 11/10
Read more
18 people found this helpful
Helpful
Report abuse

Zac Marquee
5.0 out of 5 stars Future Classic
Reviewed in the United States on August 14, 2020
Verified Purchase
this movie blends classic horror with strong commentary on the dangers of social media (and ride share apps). super well done. excellent performance by Joe Keery. had a lot of anticipation going in and was not disappointed. can't wait for a Blu-ray release, hoping it includes all the unedited clips they've been posting as part of the genius Kurtsworld96 marketing campaign/IG account.
Read more
16 people found this helpful
Helpful
Report abuse

leslie
1.0 out of 5 stars Waste of time
Reviewed in the United States on August 14, 2020
Verified Purchase
This movie is terrible and stupid .
Read more
16 people found this helpful
Helpful
Report abuse

Stephen M. Geraci
2.0 out of 5 stars A Satirical Horror Film - that doesn't work
Reviewed in the United States on August 20, 2020
Verified Purchase
Satirical Horror about a generation and a society that is destroying itself due to social media. This was kind of hard to watch because it hits too close to home and I can almost see this becoming a thing. It really is a story about how social media which started as an enjoyable way to keep in touch with family and friends soon became the amplified version of high school and a popularity contest no one should ever engage in. This over-the-top story really may not be that over-the-top in the future. The YouTube generation where everyone wants to become the next big thing has really ruined the way the younger generation views the world. Too much information at an early age, has done something to their psyche in a way that makes me believe this movie can really happen if something is not done. The main actor in this movie did such a good job, I actually had a hard time watching it and at one point, I thought I was not going to continue watching it, but being the cheapo I am, I paid to rent it so I felt obligated. I love horror films, but the violence in this one was too real because again, I don't see this as something that is out of the realm of reality. I don't recommend it, but if you are curious about watching an extreme version of how social media has ruined a generation, be my guest.
Read more
9 people found this helpful
Helpful
Report abuse

Kathryn E. Quick
5.0 out of 5 stars Unexpectedly Fun Horror with Great Performances
Reviewed in the United States on August 15, 2020
Verified Purchase
Fun performances including Joe Keery as a unsettlingly and unintentionally charming psychopath and Sasheer Zamata who is easy to root for as well as some surprising guest appearances. On top of that, there are interesting filming techniques and some surprising twists and turns. Thought the music track was really effective. Really enjoyed the added comments and tracking the story through various social medis accounts a la 'Searching' but for the horror crowd with a sense of humor but still offers valid commentary not only of social media but other current issues.
Read more
11 people found this helpful
Helpful
Report abuse

CHO
5.0 out of 5 stars WHAT A RIDE
Reviewed in the United States on August 14, 2020
Verified Purchase
Joe Keery Really shows his stuff in this new age horror/thriller as Kurt, a misguided fame starved young man looking for his spot in the social media world. This really is Keery's showcase and he keeps you guessing and on the edge of your seat for what Kurt might do next. He brings a human element to what might otherwise have been an extremely unlikeable character and for all his creepiness and frighteningly violent tendencies, he also grips you in a way that still keeps you wanting more. Loved the way this was shot, it's not overly gory or violent for violent sake, all the different angles will make for fun rewatches and Keery's layered performance elevates the film. Overall really fun and interesting exploration of the need for social media views.
Read more
8 people found this helpful
Helpful
Report abuse