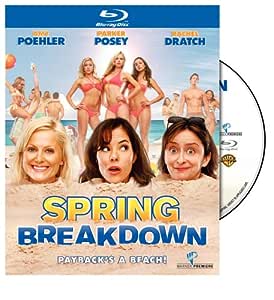 Amy Poehler (Actor), Parker Posey (Actor) Rated:
R
Format: Blu-ray
3.9 out of 5 stars 93 ratings
Available at a lower price from other sellers that may not offer free Prime shipping.

All-season comedy fun gets sprung in a big way when Saturday Night Live veterans Amy Poehler (Baby Mama), Rachel Dratch (I Now Pronounce You Chuck & Larry) and Will Arnett (Semi-Pro) gear up for one huge Spring Breakdown. Thirtysomething best friends Gayle (Poehler), Becky (Parker Posey) and Judi (Dratch) have always dreamed of being fabulous. But they never grew out of being geeks. So when Becky gets the opportunity to unofficially chaperone her boss daughter Ashley (Amber Tamblyn) to the college spring-break destination of South Padre Island, the ladies decide to turn their tragically unhip lives around and party with the beer-and-bikini set. Through keg-stands, hookups and foam parties, Becky, Gayle, Judi and Ashley are about to discover that its better to stand out than to fit in.

3.9 out of 5 stars
3.9 out of 5
93 global ratings
How are ratings calculated?
To calculate the overall star rating and percentage breakdown by star, we don’t use a simple average. Instead, our system considers things like how recent a review is and if the reviewer bought the item on Amazon. It also analyzes reviews to verify trustworthiness.

Thomas M. Sipos
VINE VOICE
1.0 out of 5 stars unfunny, unoriginal script tanks a talented cast
Reviewed in the United States on June 29, 2009
Verified Purchase
Lots of talent in front of the camera. Great cast. I especially admire Parker Posey. She was excellent in CLOCKWATCHERS, one of my favorite films of the 1990s. Also did great work in HOUSE OF YES and DINNER AT FRED'S.

(I exempt Rachel Dratch from my kudos; her performance is less inspired. But she has story credit on the script, which explains her presence.)

The script is unfunny and unoriginal. I've seen this story many times before. Nerds grow up, and years later, are given a chance to prove themselves to be cool. ROMY AND MICHELLE'S HIGH SCHOOL REUNION comes to mind (same story, better film). Also shades of ABSOLUTELY FABULOUS; Parker Posey's nerdy, socially conscious character is similar to Saffie, Edina's nerdy, socially conscious daughter.

In SPRING BREAKDOWN, three nerdy friends from college, now in their 30s, go to spring break, to keep a Senator's nerdy daughter out of trouble.

In the end, we learn "a very important lesson": you should be yourself, and not care what other people think.

JOSIE AND THE PUSSYCATS (also featuring Posey) was a fresher comedy, in that it satirized old cliches like that.

SPRING BREAKDOWN is a meandering mess that parades tired old stereotypes. The anorexic cool girls, jokes about drinking -- LOTS of jokes in this film are based on contrasting the nerdy girls with drunken, messy people. Missi Pyle lies in a parking lot, drunk out of her mind. Rache Dratch wakes up among drunk guys in bed. Etc. etc.

Yes, old concepts can still be funny, if well handled. But there's no new twist or freshness in this film. You could write the script in your head.

This would have been a funnier film if this talented cast had tossed the script and improvised the comedy. Seriously. Posey's improvisations in Christopher Guest's mockumentaries are funnier than her character in SPRING BREAKDOWN.
Read more
6 people found this helpful
Helpful
Comment Report abuse

amazingghost
3.0 out of 5 stars Cheesy - Fun if you're drunk or like slapstick humor
Reviewed in the United States on April 7, 2014
Verified Purchase
Was surprised by the cast in this movie. My girlfriend turned me onto the movie. Usually I have no patience for these type of movies but some of it was actually funny, it surprised me. Wouldn't necessarily watch again unless I was under the influence of something haha. Fun movie, don't take it too seriously and you'll enjoy it.
Read more
One person found this helpful
Helpful
Comment Report abuse

Jameson
5.0 out of 5 stars Simply: Amazing
Reviewed in the United States on June 17, 2013
Verified Purchase
One of the most underrated, but AMAZING movies of our time!! The "stupid comedy" that is actually funny and well done by the entire cast, is off the charts!! I could watch this over and over again, and in fact, I have. I have friends that have never seen/heard of this movie, and I now have influenced some catch phrases in conversation thanks to the awesomely funny "one liners" provided in this film!!
Read more
Helpful
Comment Report abuse

Andria C.
5.0 out of 5 stars If you like SNL & Bridesmaids, you’ll love this
Reviewed in the United States on September 30, 2020
Verified Purchase
I already liked the cast before I saw this, and it was the perfect amount of dumb, funny, corny. I’d you like Bridesmaids, you’ll like this!
Read more
Helpful
Comment Report abuse

Tina Corley/Midtown
5.0 out of 5 stars PURE GIRLY FUN!
Reviewed in the United States on January 3, 2010
Verified Purchase
This isn't Masterpiece Theater. You shouldn't go into it expecting that. This is pure girly FUN with the most fantastic cast of female leads. Like someone else here said, this is the film Baby Mama was meant to be. And the only downside I see to this film is that Tina Fey was not in it- besides that it stars the smartest and brightest girls on the planet. The film is pure silliness on the surface, but if you really watch you will know it has a lot of messages and deep meaning to any of us who wish they could go back and do it all over again in life knowing then what we know now. PURE FUN and I recommend it to anyone looking for 84 minutes of great escape.
Read more
Helpful
Comment Report abuse

Bob A. Gabbert
1.0 out of 5 stars Spend your money elsewhere
Reviewed in the United States on September 17, 2010
Verified Purchase
I got this film because three great comedians are in the title roles: Parker Posey, Amy Poehler, and Rachel Dratch. Through some screwy plot, the three of them end up on South Padre Island in Texas, at college spring break. If you're looking for skin, as one might expect in a spring break movie, you can forget it. There is nothing sexy about this movie and more important, three good comedians are totally wasted in a plot that makes them look like members of the PTA caught in the Animal House. Even my favorite actress in a comedy, Parker Posey, can't save this terrible movie.
Read more
2 people found this helpful
Helpful
Comment Report abuse

Elise Caitlin
4.0 out of 5 stars Funny fluff
Reviewed in the United States on July 21, 2011
Verified Purchase
I just wanted something silly that featured some fun women. I got it with this. The excellent cast made the silliness all the more enjoyable.

Now I have work to do, but this provided an ideal mind-cleansing (as in, it emptied my brain of all thought, in a welcome way).
Read more
Helpful
Comment Report abuse

CMM
3.0 out of 5 stars Girls Just wanna have Fun
Reviewed in the United States on August 15, 2013
Verified Purchase
This movie had potential.
What a cast, The writers went south quickly on this one.
These fun actresses did everything they could to keep it going.
Rent before you buy.Worth a watch at least once.
Read more
Helpful
Comment Report abuse
See all reviews

Mr. D Burin
2.0 out of 5 stars A few laughs, but it's a film which never really develops
Reviewed in the United Kingdom on June 16, 2012
Verified Purchase
Whilst the premise for Ryan Shiraki's 'Spring Breakdown' is a tired and cliched one; three thirtysomething nerds getting to have a second shot at College life, the inclusions of Amy Poehler and Parker Posey amongst the leads, is a promising one indeed. Sadly, 'Spring Breakdown' is fairly mediocre fare. Both Poehler and Posey are competent, and the former's comic delivery is excellent as usual, but Rachel Dratch (who wrote the script, along with Shiraki) is hugely irritating, in her role as Judy, a lonely, 'eccentric' woman who seems unable to comprehend her husband's homosexuality. The jokes aren't particularly good in 'Spring Breakdown', either. There are a handful of witty one-liners, but they are adrift in a game which goes for all the easy jokes without any creativity or wit - there are gun-toting, redneck politicians, dumb sorority girls, unrealistic and unfunny sub-plots (plenty of those!) and jokes about promiscuity; all of which raise the occasional smirk at most, and many of which fall flat entirely.

'Spring Breakdown' is also a film which seems to suffer from a short attention-span, with potentially comic and moving scenes alike (such as Dratch's closing speech to her fiancee), which are both poorly handled, and also swept over with unnecessary brevity. The film sometimes feels more like a series of skits, or would-be comic music videos, and it means that neither the film, nor its protagonists, ever materialise into anything particularly special. 'Spring Breakdown' is by no means a terrible movie. It's mildly entertaining, has a good heart and an uplifting message to it, and contains Rachel Dratch riding a giant stuffed chicken. It's just that it's all been done before, and much better. Too fast-paced, too short on laughs, and too weak in its characterisation. The film never breaks down, as such, but it does judder and stall with regularity.
Read more
4 people found this helpful
Report abuse