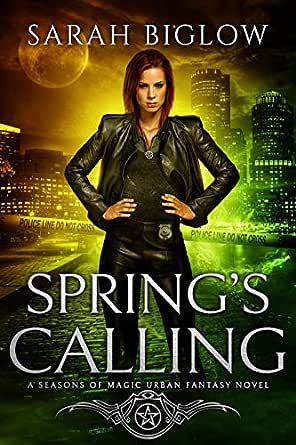 You've subscribed to Seasons of Magic! We will preorder your items within 24 hours of when they become available. When new books are released, we'll charge your default payment method for the lowest price available during the pre-order period.
Update your device or payment method, cancel individual pre-orders or your subscription at
Your Memberships & Subscriptions
There was an error. We were unable to process your subscription due to an error. Please refresh and try again. 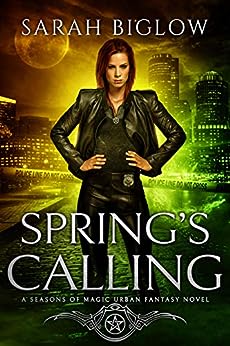 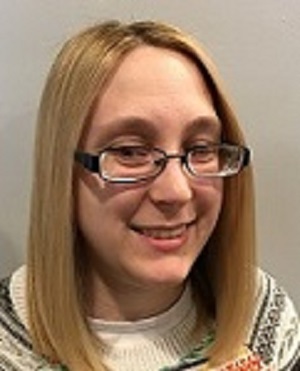 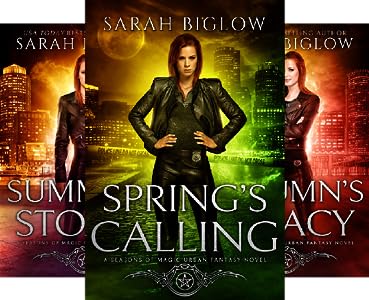 4.6 out of 5 stars
4.6 out of 5
36 customer ratings
How does Amazon calculate star ratings?
Amazon calculates a product’s star ratings based on a machine learned model instead of a raw data average. The model takes into account factors including the age of a rating, whether the ratings are from verified purchasers, and factors that establish reviewer trustworthiness.
Top Reviews

ERIN E WOLF
5.0 out of 5 stars Phenomenal
Reviewed in the United States on June 4, 2020
Verified Purchase
I give Spring's Calling: (A Seasons of Magic Urban Fantasy Novel) by Sarah Biglow, 5 stars.

Urban Fantasy is my favorite genre so I was really looking forward to this book. I didn't recall reading this author before, so I had no idea what to expect. The beginning of it was interesting, but I want more. I wanted to see Ezri have people on her side to help her. You can see that she has depended on just herself for so long and everyone needs at least one person they can go to. When more people got involved in helping her and she started letting those people in, that's when the book went to phenomenal. Not only doe she have to find the bad guy, she has to be the savior to the magical world.

This book has just what you want in an Urban Fantasy book -- a strong female lead, magic, suspense, laughter, tears, love, heartbreak; and it is all woven into a story that pulls you in from the very beginning and you cannot stop until you are finished. I was so ready to read the next book, but I have to wait because it's not out yet! That's ok, this book is so good, I will not forget this characters any time soon.

If you are a of urban fantasy, this book is for you.
Read more
One person found this helpful
Helpful
Comment Report abuse

christyTop Contributor: Fantasy Books
5.0 out of 5 stars Meet Ezri
Reviewed in the United States on June 10, 2020
Verified Purchase
This story was amazing. It mixed magic, mystery, suspense and the unknown together to deliver a story that drew me in from the beginning. Ezri is an amazing person trying to live her life and do her job in the final days before an ancient prophecy is set to occur without any help from the people who should have been there for her. I liked how everything is slowly laid out as Ezri works to put everything together and solve her murder case and deal with the return of her family, friends, and the Authority. It was well written and kept me reading to see if I could guess what was going on before Ezri does. I loved all the players and characters and Ezri really grew on me with her personality and trying to do be the best cop she can be.

joe jack
5.0 out of 5 stars BUY THIS BOOK NOW!😍 YES 👍IT'S THAT AWESOME!
Reviewed in the United States on June 2, 2020
Verified Purchase
OUTSTANDING BOOK! I DO TRULY RECOMMEND THIS AUTHOR 'A CREATIVE AND MAGIC WRITING.I AM REMINDED THAT WE READER'S DIGEST BOOKS 📚 AND LOATHE WHEN A BOOK GIVES OUR SPIRIT "A SOUR DIGESTION!😍 HERE IS A WINNING STORY!😍
Read more
One person found this helpful
Helpful
Comment Report abuse

Jennifer Layne
4.0 out of 5 stars Good read!
Reviewed in the United States on June 15, 2020
Spring's Calling (Seasons of Magic #1) by Sarah Biglow

An ancient prophecy. A case steeped in dark magic. To protect the world and fulfill her destiny, one detective must reconcile her past in order to save the future.

Ezri Trenton is a cop, a new detective with the Boston PD & Ezri is also a witch. Her relationship with both her job and her DNA is—complicated at best.

Ezri is a descendant of witches who died in the Salem Witch Trials. She is also prophesied to be the Savior destined to defeat a plot by evil Witches who will strike on the day that of the Solar eclipse and meteor shower on the Vernal Equinox. Ezri is committed, personally, to doing her duty but she's not on speaking terms with any of the other witches after her mother was killled on Ezri's fifteenth birthday. She found her mother's body, knife in her chest and the Authority, the governing body of witches, covered it up and did nothing to find the killer.

Her complicated relationship with her police career comes from the fact that she still basically seeks to follow the rules and ethics of the Authority, and that means, sometimes, often, not telling the whole truth about how she gets things done. Now March 2017, and this vernal equinox is the one during which she's destined to be a hero. However, right now, Ezri and her partner, Jacquie DeWitt, are hunting for a serial killer. Or killers. She knows there is more to this whole case but can’t tell her partner because it would reveal too much.

This is very well written, with good characters and good plotting.

I received a free Advance Reader Copy from the author, and am reviewing it voluntarily.
Read more
Helpful
Comment Report abuse

Aimee
5.0 out of 5 stars Great Blend of Murder Mystery with Magic
Reviewed in the United States on April 10, 2020
Ezri has pushed everyone away from her since her mothers death. She decided she will train herself for role as Savior. She loves being a cop and helping others. Ezri and her partner are called to a homicide scene, Ezri knows that magic killed the man. She can't her partner that, so she gathers facts for herself. Ezri partners asks her some questions about her life and Ezri wants to tell her about magic and the case. There is another case with the same method of murder. She is picking up the scents again, this time she leaves the scene. Her partner reports her to her captain. She is off the case until she sees the psychologist and is cleared to work. Ezri makes it to her appointment, she is confronted with a face from her past.
Ezri hasn't seen her cousin Desmond since her mother's death on her birthday. She feels as he help over the whole thing up with the Authority. He tells her see needs to see the council and he will re-instate her. That the prophecy is bigger than just her. They have resources to help her with her case and the prophecy.
Ezri will have to confront the her past, learn some hard truths about everything and everyone. She will have to stop these murders and the dark magic before it is too late. She just hopes she doesn't die doing it.

This book really grabs you. You have a cast of characters that each have their own emotional issues, the action of the murders and magic. Really good murder mystery with magic added in. I recommend reading this, each chapter has a little bit of a reveal, really good. Looking forward to reading the next book.