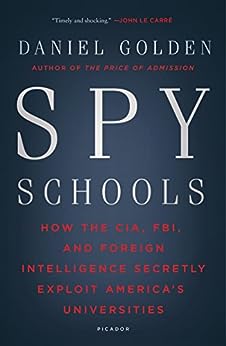 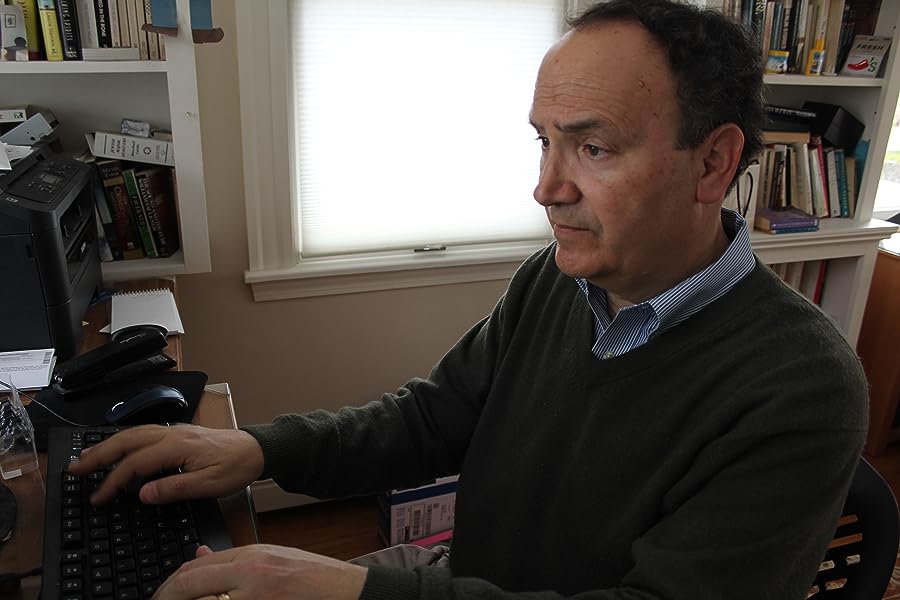 Daniel Golden won a Pulitzer for his Wall Street Journal series on admissions preferences at elite colleges, which became the basis for his bestselling book, The Price of Admission. His exposé of Countrywide’s special loans to lawmakers during the subprime mortgage crisis resulted in Senate ethics hearings at which his story was read in its entirety into the Congressional record. In 2011, he was named a finalist for the Pulitzer in Public Service for his Bloomberg News series about for-profit colleges exploiting veterans and low-income students, collapsing the multi-billion-dollar industry. --This text refers to an out of print or unavailable edition of this title.

"Whether you are a teacher, student or parent, Daniel Golden’s closely researched account of the assault on our academic freedoms by home-grown intelligence services is timely and shocking."―John le Carré

"Daniel Golden's Spy Schools provides a necessary, in-depth examination of the relationship between America's intelligence agencies and its universities. It's a relationship fraught with the conflict between academic freedom and the need for clandestine intelligence gathering. A must-read for both academic leaders and government intelligence directors, Spy Schools illustrates the complex world which both inhabit." ―Janet Napolitano, President, University of California, and former U.S. Secretary of Homeland Security

“It’s real-life ‘Spy vs. Spy’… In this important book, Golden writes that universities not only ignore what is happening on their campuses but also sometimes condone it in ways that raise serious questions about America’s national security…[a] fascinating book.”―The Washington Post

“Golden …turns his considerable fact-finding skills to an eye-opening chronicle of how higher education has evolved into a key source for obtaining military and technological intelligence. A provocative look at the transformation of academia to a broad chessboard of international espionage." ―Kirkus Reviews

“This forensic analysis of espionage in academia offers a chilling, highly readable insight into the unscrupulous exploitation by ruthless intelligence agencies operating across the globe.”―Nigel West, intelligence historian and author of Spycraft Secrets

“Comprehensive…Golden’s book doesn’t just shed light on previously untold stories. It also highlights the existential questions facing higher education, not only when dealing with infiltration from foreign governments, but also those brought on by cozy relationships between the U.S. intelligence and academe.” ―Inside Higher Ed

“Daniel Golden brings his razor-sharp Pulitzer Prize-winning investigative skills to this woefully under-reported, yet critically-important aspect of intelligence. He takes us inside a program held over from the Cold War, where the stakes are high, but the costs to our civil liberties are higher.”―John Kiriakou, author of "The Reluctant Spy: My Secret Life in the CIA's War on Terror"

"Spy Schools could not be more relevant. This is a book of both wisdom and caution and should be widely read and discussed in and outside the walls of academe...Even better than The Price of Admission."―E. Gordon Gee, president of West Virginia University

“Spy Schools is an explosive and deeply disturbing look at the dirty laundry under American universities’ academic gowns. Dan Golden is a gifted researcher and an elegant writer whose exposé of campus espionage should raise alarms from the ivory tower to Capitol Hill.” ―Mitchell Zuckoff, New York Times bestselling author of 13 Hours and Lost in Shangri-La

“Daniel Golden's Spy Schools sheds a much needed light on one of the great under-reported occurrences in today's spy wars: how U.S. academic institutions serve as a target for foreign countries obtaining critical technologies while U.S. intelligence agencies, principally the FBI, use those same institutions as a base for intelligence and counterintelligence activities.” ―I.C. Smith, former FBI Special Agent in Charge and author of Inside: A Top G Man Exposes Spies, Lies and Bureaucratic Bungling Inside the FBI

“Golden’s approach has the virtue of taking readers deep inside individual stories… [His] book is chock-full of cautionary tales that all academics need to take seriously.”―The American Association of University Professors

4.6 out of 5 stars
4.6 out of 5
46 global ratings
How are ratings calculated?
To calculate the overall star rating and percentage breakdown by star, we don’t use a simple average. Instead, our system considers things like how recent a review is and if the reviewer bought the item on Amazon. It also analyzes reviews to verify trustworthiness.
Top reviews

To me this is shocking. I don’t think kitchen staff should ever poison or contaminate food. In the book it said the victims became violently ill and while it implied they survived it did not come out and say that directly. Did they survive? When I heard the author give a talk at Arlington Community Education in Arlington., Massachusetts many people laughed when he read this part of the book. But it’s not funny. It’s an abuse of power and unfortunately if the CIA has done it in one place they will do it in another. How many times has this happened? Was there ever confusion over the intended victim? Was the poison chemical, viral or bacterial?

Most of the book concerns foreign students being trapped into betraying their countries by the CIA and the FBI. Under false identities agents would ask them to write about scientific subjects and pay them. Then they would reveal that they were CIA or FBI agents, and say that they would tell their home countries that they have been working for them. In many places in the world that would mean a death or prison sentence for the student. The book also raises the concern of American students being recruited by foreign agencies., specifically Cuba, Russian and China.

Theft of scientific research and intellectual property is another topic covered.

Nothing about this is ok. Every college and university administrator should read this book. We need to reign in the CIA and allow no recruitment of any students by any intelligence service on college campuses.

Jonathan Marks
4.0 out of 5 stars Excellent review of how the spy school pendulum is swinging again in a different direction
Reviewed in the United States on October 15, 2017
Verified Purchase
Heard the in-depth interview with Daniel Golden on a recent editon of SPYCAST, the podcast from the Spy Museum in Washington DC. Golden examines how the intelligence communities take advantage of the open character of many Universities. It examines some of the clever schemes employed by Chinese Universities to gain important strategic insights from visiting professors from outside China. But also the US Intelligence organisations will help organize conferences in other regions of the world in the hope of luring scientists from countries like Russia and Iran. Golden has plenty of examples in the book, although it would be nice to hear more about the leading European universities. In my opinion, some of the European Universities are still rather naive.
Read more
5 people found this helpful
Helpful
Report abuse

Daniel D.
4.0 out of 5 stars Spies are everywhere. And its perfectly normal.
Reviewed in the United States on November 25, 2017
Verified Purchase
Golden's account of how foreign and domestic intelligent agencies attempt to infiltrate and take advantage of American universities is shocking. Reading Spy Schools increased my understanding of covert information gathering and how citizens of different countries are approached and exploited for their strategic knowledge and skills. Once the shock dissipates, the reader comes to understand that spying is universal, with each country acting in its own self-interest. We do it. The Chinese do it. So do the Iranians, Russians, and Israelis. So I guess that makes the game "fair" in its own twisted sort of way.
Read more
3 people found this helpful
Helpful
Report abuse

SFWriter
5.0 out of 5 stars You'll never look at academia the same way again!
Reviewed in the United States on April 18, 2018
Verified Purchase
This book is great! Spy Schools takes you inside the shadowy world of espionage on college campuses, and it's a fascinating read. The main story-line involves a professor in Florida and the FBI's efforts to pressure him to spy on his native China, and it's eye-opening to get an inside view into how nations try to recruit and create spies inside academia. But there's so much more than that. One of the most surprising themes of Spy Schools is the degree to which major U.S. universities knowingly enroll undercover intelligence operatives, whose mission is to develop informants among their foreign classmates, especially in mid-career programs. This book is chock-full of great stories and is well worth your time. You'll never look at academia the same way again.
Read more
2 people found this helpful
Helpful
Report abuse

Yvette Wooley
5.0 out of 5 stars Five Stars
Reviewed in the United States on April 21, 2018
Verified Purchase
An interesting topic, without much reporting to date. This book provides an objective and thoroughly researched assessment.
Read more
Helpful
Report abuse

Maria Evan
4.0 out of 5 stars Only what they want you to know.
Reviewed in the United States on November 14, 2017
Verified Purchase
Certainly opens your eyes regarding the secrecy within our own country.
Read more
One person found this helpful
Helpful
Report abuse

KM
5.0 out of 5 stars Five Stars
Reviewed in the United States on January 9, 2018
Verified Purchase
A fascinating account of how universities, once again, are the playgrounds of rival intelligence agencies.
Read more
Helpful
Report abuse
See all reviews