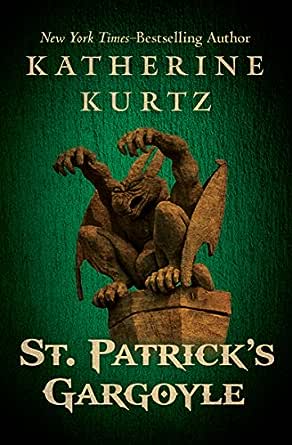 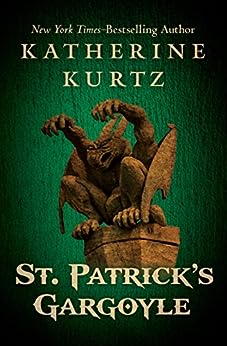 “Once you have read and enjoyed this novel you will never look at a gargoyle in the same way.” —Tulsa World

Katherine Kurtz was born in Coral Gables, Florida, during a hurricane. She received a four-year science scholarship to the University of Miami and graduated with a bachelor of science degree in chemistry. Medical school followed, but after a year she decided she would rather write about medicine than practice it. A vivid dream inspired Kurtz’s Deryni novels, and she sold the first three books in the series on her first submission attempt. She soon defined and established her own sub-genre of “historical fantasy” set in close parallels to our own medieval period featuring “magic” that much resembles extrasensory perception.

While working on the Deryni series, Kurtz further utilized her historical training to develop another sub-genre she calls “crypto-history,” in which the “history behind the history” intertwines with the “official” histories of such diverse periods as the Battle of Britain (Lammas Night), the American War for Independence (Two Crowns for America), contemporary Scotland (The Adept Series, with coauthor Deborah Turner Harris), and the Knights Templar (also with Harris).

In 1983, Kurtz married the dashing Scott MacMillan; they have a son, Cameron. Until 2007, they made their home in Ireland, in Holybrooke Hall, a mildly haunted gothic revival house, They have recently returned to the United States and taken up residence in a historic house in Virginia, with their five Irish cats and one silly dog. (The ghosts of Holybrooke appear to have remained behind.)

Young adults will best appreciate this light, sentimental fantasy about the gargoyles who watch over the churches of Dublin, whether Catholic, Protestant or deconsecrated, from bestselling veteran Kurtz (the Deryni series, etc.). More mature readers, on the other hand, may be put off by the simplistic story and the slack pace. The city's gargoyles meet monthly on a moonless night and, like good Irishmen, bemoan change and the loss of the good old days. When vandals break into St. Patrick's Church, Paddy, its resident gargoyle, calls on old Templeton, a Knight of Malta who drives an ancient Rolls Royce for weddings, to help him apprehend the miscreants. Paddy also brings to life the Rolls Royce's hood ornament, which Templeton tells him is a gryphon, not a gargoyle. Investigating the scene of the crime with his thirtyish policeman godson, Marcus Cassidy, Templeton finds Death's Deputy at the church, expecting his due. In a nice touch, Paddy argues with the deputy to allow the old man more time to discover who's behind the break-in. Heavy in its piety and exposition of Celtic history, this novel is a determined tourist guide to Dublin sites; however, James Joyce did some of the same thing, and Ulysses is still going strong.

When Dublin's St. Patrick's Cathedral becomes the target of an act of vandalism, the gargoyle guardian of the building enlists the aid of an aging Knight of Malta to assist him in his pursuit of the vandals. Combining an interest in Irish history with snatches of Templar lore, the author of the "Deryni" and "Adept" series creates a story of angelic powers and demonic forces locked in an eternal struggle. Engaging characters and gentle irony add a light touch to a metaphysical drama that belongs in most fantasy collections.
Copyright 2001 Reed Business Information, Inc. --This text refers to an alternate kindle_edition edition.

It's bad enough that, with Christmas just around the corner, some "lager louts" have trashed the vaults under St. Michan's church in Dublin. It's worse when Paddy the gargoyle, returning from the Dublin gargoyles' monthly conclave to his own St. Patrick's Cathedral, finds an ambulance and police cars parked outside. Thieves have stolen two silver alms basins and beaten Paddy's favorite verger. Paddy, who like his fellows is an avenging angel reassigned to guard duty, sets off to investigate. Distracted by a gargoyle ornament on an old Rolls, he inadvertently speaks to its owner, Francis Templeton. Then the worst happens: Paddy negligently allows Templeton to see his reflection in the car's polished fender. Reflections show gargoyles' true, angelic miens, and humans who see their glory don't live long thereafter. Luckily, Templeton is 82, with a failing heart and a longing to see Maeve, his wife, again and forever. Moreover, he belongs to the Knights of Malta, a Catholic men's order sworn to fight for the faith. As such, he is qualified to help meet the crisis that the miniwave of church vandalism and theft has camouflaged. A major demon, buried under Clontarf Castle, is about to burst from its worn bindings, and a human must help rebind it. Perhaps Paddy's blunder was part of a higher plan. The creator of the Deryni fantasy series wraps plenty of Dublin sights, fascinating bits of Catholic history, much ecumenical Christian goodwill, a cast of endearing characters, amusing dialogue, and just enough thrills into a charming package of a tale. Although it emerges either 2 months too late or 10 too early, this lovely yarn deserves to become a Christmas perennial. Ray Olson
Copyright © American Library Association. All rights reserved --This text refers to an alternate kindle_edition edition.
Read more