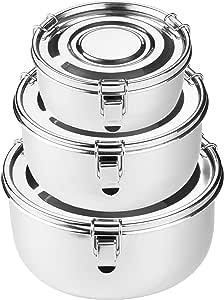 PREMIUM QUALITY, DURABILITY, & VERSATILITY
The Fresh Locker's set of three premium stainless steel food containers are durable, versatile, and practical. Great for lunches, left-overs, soups, kimchi, sauces, snacks, baby food, or almost anything you want to store. Three different sizes means you'll have the right sized container for whatever the occasion. Our containers are high grade stainless steel with no cheap plastic lids or latches. Quality craftsmanship that was built to last. And unlike glass, our containers won't shatter if dropped. A good choice to take to work, school, on camping trips, and more.

STORE EASILY
Our containers can 'nest' (i.e. fit inside each other) for easy storage. They nest even with lids on so you won't have stray lids floating around in drawers and cabinets.

LEAKPROOF, AIRTIGHT, & SPILL-PROOF STORAGE
Our containers come with completely leak-proof and smell-proof airtight lids. No spills or messes here! The three latch closures on each side form an airtight and leak proof seal around a well constructed round stainless steel body. No cheap plastic lids or latches.

BETTER FOR YOU & THE ENVIRONMENT
We've carefully selected 316 grade stainless which is the top quality food grade stainless steel. Most competitors sell the cheaper 304 grade stainless steel; 304 grade is more susceptible to rust and corrosion over time. 316 is the best you can get! Our containers are BPA, lead, and phthalate free. Did you know it can take plastic as many as 1,000 years to decompose in a landful? And many plastics have chemicals that can leach into food and liquids. Stick to quality stainless steel; it's better for you and the environment.

Different sizes will have you prepared for everything from dressings to soups to lunches or leftovers.

3.8 out of 5 stars
3.8 out of 5
269 global ratings
How are ratings calculated?
To calculate the overall star rating and percentage breakdown by star, we don’t use a simple average. Instead, our system considers things like how recent a review is and if the reviewer bought the item on Amazon. It also analyzes reviews to verify trustworthiness.

Kaaron
3.0 out of 5 stars OK with this purchase
Reviewed in the United States on September 19, 2017
Verified Purchase
2nd UPDATE: November 16, 2017 -- With no help from the company, I figured out a few things. 1) the seal will come off when washing or soaking the storage container after use. 2) Though it did seem impossible to reinstall the separated seal, without any help from the company, I figured out that if the lid and separated seal are totally and completely DRY without a hint of moisture anywhere, if you use the handle of a fork or spoon as a pressure/placement tool, you can wedge the seal back into the correct position and use the food containers as intended. The company should have told customers UPFRONT that this is part of the process of successfully using these containers -- that would have been much more honest and avoided a lot of angry frustration on the part of purchasers. All that said, now that I know how to deal with the seal issue, I am back to using these food containers on a regular basis and after going from 5 stars originally, to two stars, have given back another star for a total of 3, mostly due to lack of upfront notification of how the seal falls out and how to deal with it, by the company. If they would have told me upfront I would have given this product a higher rating. UPDATE ON October 31, 2017. After giving this a 5 star rating, and now after using these for a few weeks, I have demoted it to 2 stars. I took a chance and it didn't pay off. Others mentioned the gasket that pops out of the lid, and I ordered anyway. Well the gaskets have popped out now, several weeks after purchase, and it is IMPOSSIBLE to reinstall them. The latches are very lose without the gaskets, the lids are lose and NO LONGER Leak ProoF at all. I can use these with non-moist foods and use rubber bands to hold the lids on, that's about it. Following is my original review written only a few weeks ago, accompanied, at that time with 5 stars.--- "Very happy with this purchase. Wish I could buy the same thing but smaller than the smallest size that comes with this set. It's sturdy -- so far -- and much lighter weight than what I was using before to pack lunch for hikes"
Read more
48 people found this helpful
Helpful
Comment Report abuse

K. Weeks
3.0 out of 5 stars I just saw a review posted that's exactly like mine. After using these this Summer and just ...
Reviewed in the United States on August 25, 2017
Verified Purchase
UPDATED REVIEW: I'm doing this because the owner worked hard to be in touch with me, to check in and to send me a new set of these. I'd upgrade to two stars if he hadn't been so attentive, but three is the best I can do. Whatever supply chain decision the company made in 2017 was just a bad one. Whatever they made a year ago, in early 2016, was remarkably high quality, but the ones I bought in August 2017 were remarkably low quality. ORIGINAL REVIEW: I I just saw a review posted that's exactly like mine. After using these this Summer and just loving their functionality and ability to keep fruit and other food items cold at the pool (a friend had purchased before our vacation), I bought these for school. THIS WEEK! We wound up using the two smaller ones for the lunch bags, uh, twice, and they're as expected. But the larger one is totally broken -- after just one use -- thanks to the loose latches the other recent review notes. You cannot get the lid to stay on. No way to fix it, and why should I have to do that anyway? I'll return this and ask for a replacement, and re-review if the containers for some reason last. But for now, I'm dubious and so disappointed, and if the second batch operates the way this way has, I'll return for refund and move on.
Read more
24 people found this helpful
Helpful
Comment Report abuse

Soup1958
1.0 out of 5 stars Love the three useful sizes but they do not last. Disappointing purchase.
Reviewed in the United States on August 26, 2017
Verified Purchase
Love the three useful sizes. Great for holding leftovers or packing lunches in non leak containers. Unfortunately, after using them exactly once, two of the seals broke inside the lids. Now these are useless. I was hoping these would last for a long time and that I would be replacing my plastic storage bowls with these.
Read more
18 people found this helpful
Helpful
Comment Report abuse

cs
5.0 out of 5 stars The highest quality stainless steel containers I've ever seen
Reviewed in the United States on August 7, 2017
Verified Purchase
Luxurious manufacturing! Beautiful design elements- I find myself lingering as I cup the smooth lovely curve of the bowl in my hand, and admiring soft light reflecting from the perfectly polished steel.
The snapping mechanism is satisfying: positive and precise (do be aware that the inner silicon seals, appropriately, require a bit of your attention for placement after washing- and don't loose the seals when washing.)
I think these containers---(there must be some better name than 'container') will last for generations.
The manufacturers deserve an award, and a full set should be archived in the Smithsonian, documenting that every now and again, commoners such as myself can be uplifted by the fine art of design perfection combined with flawless manufacturing.

....yes, that last bit that sounds a little overblown, but I didn't want to weary you with lush superlatives....