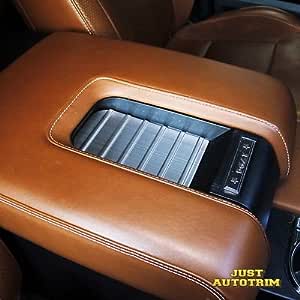 FIt for 2014-2018 Toyota Tundra Condition: 100% Brand new in Box Material : Made Of Stainless Steel Include : 1pcs in one set. Great Quality , Made in a ISO9001 9002 Factory Easy installtion,3M tape is attached at the back，Only need Stick by self. Features: Exterior or interior upgrades Protection Redefining the car personality

Bargain Finds related to this item

4.5 out of 5 stars
4.5 out of 5
113 customer ratings
How does Amazon calculate star ratings?
Amazon calculates a product’s star ratings based on a machine learned model instead of a raw data average. The model takes into account factors including the age of a rating, whether the ratings are from verified purchasers, and factors that establish reviewer trustworthiness.

MH
3.0 out of 5 stars Panels look good, however they don't stick..........
Reviewed in the United States on March 16, 2019
Verified Purchase
The cut of these stainless steel plates are very nice, however, for whatever reason, they simply don't stick, no matter what I do with the factory 3m tape they give you, pre-stuck on the device, they simply don't work. They just pop off and you can lift them right up as if there's no tape to begin with.
The placing of the tape from the factory isn't very precise, but it's on the back of the piece so it really doesn't matter.
I've applied "Dash Kits" before, and I've been an avid detailer for 30 years. So I took great effort to prep the surface correctly before affixing the panels.
I used denatured alcohol, 3 times, on the surface, and made sure it was dry. I tried to affix the plate, and it simply doesn't stick. I'm not sure if this is a Toyota thing (2017 Tundra, 1794 edition), as the plastic does have a slight porosity to it, or "Texture". I then tried rubbing alcohol thinking maybe the denatured alcohol was the issue. Same problem, the panels literally can be lifted off as if there's nothing attaching them.
I like the looks of the panels, however I'm going to have to figure something else out.
I give them a 3 cause the panels look good, but I would give the issue of them not sticking a 0.
I'm going to try one of the higher end velcro's that are supposed to stick better. Due to them being two tapes, they may raise the panel a bit, but other than putting dabs of silicone on the panels, and literally gluing them on, which I don't want to do, I can't think of much else that would work. Possibly just the standard white two sided tape would work, but the 3m red label they use (gray once peeled) doesn't stick. And that was for this armrest piece and the front center console piece.
Solution? use silicon sealant, a good quality (like GE), which you can get at any hardware store. Clear or black, really doesn't matter.
Put small hershey "kisses" dabs on the back (not near the cutouts or edges, as you don't want them to ooze), and press them down. Put something on them to hold them there for a few hours (like a 12fl ounce bottled water) and leave them for the day/night. voila.. it works.

KG
4.0 out of 5 stars Excellent product, just need to add 3M tape
Reviewed in the United States on October 8, 2019
Verified Purchase
2019 Toyota Tundra SR5 Crewmax. As everyone else noted, they had issues with the preinstalled 3M tape not sticking and after opening the package, I can see why. It is installed the long way and not along the horizontal grooves. According to all reviews I read that was the only issue so I went into this purchase knowing I would have to add my own 3M tape and I was okay with that. This product is awesome though; top notch quality and durability. My center console was all black and boring looking - this dressed it up a bit. Absolutely love it. If the company alters the way the 3M tape is installed in factory, it would certainly deserve 5 stars, but because of that I gave it 4. Still worth the purchase knowing I had to add tape to it.
Read more

Banks R. Zellner
2.0 out of 5 stars Good idea but needs to be tweaked!
Reviewed in the United States on July 26, 2018
Verified Purchase
This is a great idea but it needs to be tweaked. The product fit in its designated place on the console. But once the tape is is applied to the surface, it does not hold it in place and was very loose. It was no where close to being secured. I really liked the idea but it simply didn't work because the tape did not hold it in securely where it should be. I think that velcro would be better than the tape.
Read more
2 people found this helpful
Helpful
Comment Report abuse

savellaa
4.0 out of 5 stars Great product. 4 stars because
Reviewed in the United States on March 14, 2018
Verified Purchase
Great product. 4 stars because: Wish whomevever designed this would have put more thought into the placement of the 3M tape. When set, if you place pressure on either the front or back when applying, the whole thing flips up. Need to research how to line up tape with ridges...Hope it stays put, time will tell.
Read more
2 people found this helpful
Helpful
Comment Report abuse

Jimmy
4.0 out of 5 stars Adhesive bites
Reviewed in the United States on February 7, 2019
Verified Purchase
I bought this along with 2 other pieces to give my Tundra a nicer look.
The adhesive on all three pieces was garbage! That's why i'm giving the 4 stars instead of 5.
Put better adhesive on these things.
Read more
One person found this helpful
Helpful
Comment Report abuse

EL
1.0 out of 5 stars Never Installed
Reviewed in the United States on December 17, 2019
Verified Purchase
I didn't install this because I foresaw junk getting in the cracks and it being really difficult to keep clean. That's just my opinion.
Read more
Helpful
Comment Report abuse
See all reviews from the United States
Pages with related products. See and discover other items: toyota tundra accessories, tundra parts, tundra interior accessories