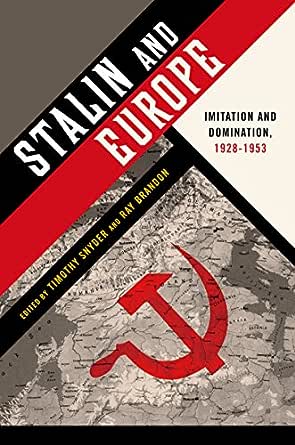 Flip to back Flip to front
Audible Sample Playing... Paused   You are listening to a sample of the Audible narration for this Kindle book.
Learn more
ISBN-13: 978-0199945566
ISBN-10: 019994556X
Why is ISBN important?
ISBN
This bar-code number lets you verify that you're getting exactly the right version or edition of a book. The 13-digit and 10-digit formats both work.


"One of the merits of this volume to bring Eastern European and Western historians together and to present their research to a broad public in an English-language publication."--Peter Ruggenthaler, H-Diplo

"Stalin and Europe continues a process of reorientation that seeks to incorporate Eastern European and Russian history into European history. The issue of Stalinism and its place in Europe is a particularly treacherous challenge, which this volume resolves in a series of probing essays that explore the Soviet Union's paradoxical relation to the rest of Europe. A diverse group of historians on Germany, Eastern Europe, and the Soviet Union presents the results of voluminous, recent research on the subject. They are an important reminder, and provide ample food for thought, on Russia as a force in European history."--Michael Geyer, University of Chicago
"I read this fascinating, lively collection through from beginning to end in one sitting. That speaks highly for the quality and the challenges that each of the pieces offers. The contributions are primarily from top national and international experts in the field, including a number of rising stars and scholars from Central Europe. All of the essays are grounded in the archives and based on original research. The volume features a variety of methods, perspectives, and approaches, from newer social history to more traditional military and diplomatic history. The collection as a whole reminds us of the seamless transition from the 1930s in the Soviet Union, into war and conquest, and on into the Cold War." --Robert Gellately, author of Stalin's Curse: Battling for Communism in War and Cold War
--This text refers to the hardcover edition.


Timothy Snyder is the Bird White Housum Professor of History at Yale University, specializing in the history of central and eastern Europe. He is the author of numerous books, including Bloodlands: Europe Between Hitler and Stalin.

Ray Brandon is a freelance translator, historian, and researcher based in Berlin. He is the co-editor of The Shoah in Ukraine: History, Testimony, Memorialization.
--This text refers to the hardcover edition.